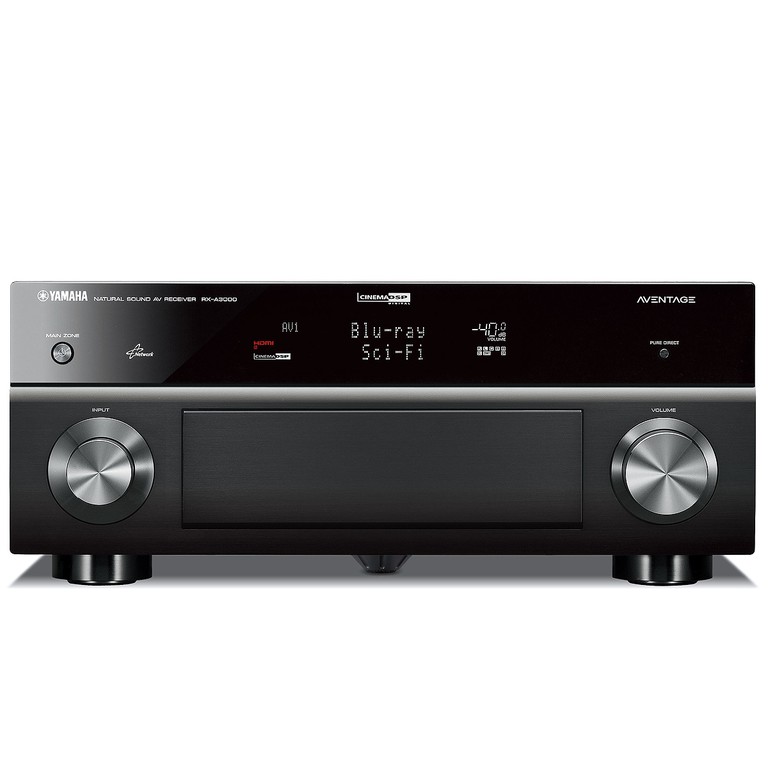 AV receivers are constantly changing, constantly leap-frogging one another in features and capabilities. This year Yamaha announced its Aventage (RX-A) line and, in the process, jumped over a lot of the competition. And not a little jump, more like an Olympic gold medal long jump. Much of that jump is simply in the way of value - I mean the Aventage line in general has build quality and features that seem like it should cost a lot more than it does. The RX-A3000 takes that to the nth degree.

There are five receivers in the Aventage lineup and the RX-A3000 is the flagship. The line is a simplified high-end run at the AV receiver concept. As such, there is a very defined delineation between models, but a few specific break points define some key places where some users will seek to spend a little more and up the ante on the return for their investment. Let's take a quick look:

As we see it, there is a definite line in the sand drawn after the RX-A1000 which adds a significant amount of power, HQV Vida processing and Zone 2/3 video capabilities. If you want the high-end of what Yamaha is now offering, you're going to want to get into the RX-A2000 or RX-A3000. Take a look down the line, however, and it's remarkable what the first three of the line manage to cram in at much lower price points. Economy of scale has done much to bring down the price for features you would simply not have dreamed of just a few years ago. HDMI Standby-through mode in a $600 receiver with a motion GUI interface and 12V trigger outputs? 2011 is going to be a good year for upgraders.

Now for a trip back through memory lane. Back in 2008 Yamaha released its top of the line RX-Z7 AV receiver. It had 7 channels of amplification with 140 watts each. All manner of video upscaling (analogue and digital) was included and it had a whopping 5 HDMI inputs and even two paralleled outputs. For room correction, Yamaha pulled out the stops and debuted a new proprietary YPAO-based multi point room calibration system. For multi-room applications there was support for 4 Zones of audio (including a dedicated digital audio output for Zone 4) and networking features to stream online music and even allow the receiver to be controlled by an iPod Touch or iPhone. It weighed just over 40 pounds and cost $2700. It was pretty impressive to say the least.

Then, two years later, Yamaha released the RX-A3000 Aventage receiver. It too has 7 channels of 140Watts each, the same analogue and digital upconversion. But it has 8 HDMI inputs and 2 outputs, all 3D compatible and supporting the latest features like Audio Return Channel. It also has even more impressive features, like the ability to bypass HDMI while in standby, so you can use your TV without having to turn on the receiver. It has close to the same advanced multi-zone YPAO room correction system and network features and the 4 Zones of audio. It adds another component video input, bringing the total to 4 - which is more than enough in our opinion, especially given the decline and phase-out of analogue outputs in favor of HDMI. It does remove one digital audio input and output. It also removed the two switched outlets on the back. But here's the kicker. It's nearly as hefty as the RX-Z7 and costs just $1700.

Now we're not going to say that the amplifier section is exactly the same as the RX-Z7, but given the feature set, weight and $800 cost savings, Yamaha's RX-A3000 just became the most modern "big man on campus" and it's going to take quite a bit to topple this goliath.

Here is the comparison of the RX-Z7 vs. the RX-A3000 side-by-side, check it out for yourself:

chris357, post: 1057661, member: 41595
Cool, i'm feeling better and better about selling that krell amp. I'm actually really glad I found this site.. it's giving me a new perspective about what costs are worth while in this hobby.

dBW are the proper unit for amps, but for marketing reasons they choose to use Watts instead.

Cool, i'm feeling better and better about selling that krell amp. I'm actually really glad I found this site.. it's giving me a new perspective about what costs are worth while in this hobby.
lsiberian posts on October 29, 2014 16:51

chris357, post: 1057531, member: 41595
ok, so in 2011 I downsized to one of these and have been pretty happy with it. I was thinking about adding an amp or something until I read this review, so does this receiver still hold up compared to whats out there now? I was thinking of emotiva or something like that(I dont want to spend krell money anymore or even used krell money.) Anyway just fishing right now and any insight is appreciated.

the 3000 is running 155WPC channel, so the power is there. outside of the ESS DAC and the Atmos feature, which is still in it's infancy, what are u looking for? save ur money and enjoy it.
Post Reply