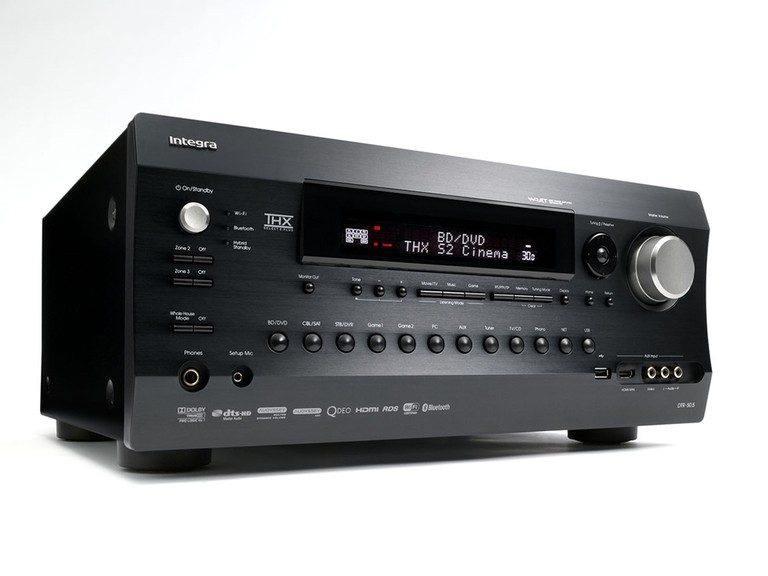 There are a few ways to sell your product. If you've a history within a product category, you may sell on name recognition alone. Perhaps placement in a store (often near the register) is enough. But if you are a receiver manufacturer, you've got two main ways of earning your customer's dollars - features and price. The right mix of those two will have your receivers flying off shelves. Get the balance wrong and they'll be collecting dust.

Integra Research is the custom install arm of Onkyo Audio. As such, they are in a slightly different category as other manufacturers. They have not only general consumers to think of, but installers as well.  Those two groups often have very different ideas of what is valuable. The basic customer just wants something that works and has all the latest features. The custom installer needs to think about the whole of the install and wants something that not only the client will be satisfied with, but will also make the install as easy as possible.

Integra is no slouch in the features department. They've often offered features before anyone else. With their new DTR-40.5 and DTR-50.5, they are once again pushing the envelop by integrating not only Wi-Fi but Bluetooth into their new receivers. This is the epitome of synergy of giving custom installers and users something they want.

The DTR-40.5 is the smaller of the two new receivers. Sporting 7.2 channels and 110 watts of discrete amplification per channel, the DTR-40.5 is THX Select2 Plus certified (for medium sized rooms - up to 2000 square feet). It has a Push-Pull amplifier design and 3-stage inverted Darlington circuitry on all channels. The DTR-40.5 has two independent power supplies and supports all the latest high definition audio formats. There are speaker terminals for all seven channels as well as an additional set for Zone 2 to make for easy configuration switching without the hassle of moving wires. There are eight HDMI inputs (one on the front which is MHL certified) and two outputs. There is an USB port on the front for streaming from your mobile device. The DTR-40.5 has InstaPrevue, which is HDMI's version of Picture-in-Picture, Audyssey DSX and Dolby Pro Logic IIz for front high channels, and Audyssey's MultEQ room correction. It uses Qdeo by Marvell to upscale all your sources to 4k and upconvert all sources to HDMI. A phono input is available for those still rocking vinyl.

The big news, of course, is the Wi-Fi and Bluetooth features. This allows you to stream to the DTR-40.5 via Bluetooth from almost any phone or portable device without connecting wires. The Wi-Fi will allow you to connect to your home network (there is an Ethernet port available for those with a nearby connection) without wires. Note that the receiver has two antennas for WiFi, while most other receivers with WiFi only sport one antenna. With Integra's Remote Apps for iOS and Android, users can push music to the AVR from phones and tablets. They can also playback high definition music files in FLAC, DSD, ALAC, HD 24/96 and HD 24/192 formats from HD music download services. The DTR-40.5 is preconfigured for Spotify, Pandora, Rhapsody, SiriusXM Internet Radio, Tune In and many others.

Custom installers will appreciate the inclusion of Powered Zone 2 and Zone 2/3 preouts, two IR inputs and one output for remote control integration, and three 12-volt triggers. A bi-directional RS-232 port and Ethernet jack are available for connection to some home automation systems. In fact, these, a second component video input, and the full 7.2 channel pre-outs are what separates the Integra DTR-40.5 from the Onkyo counterpart. That and about $400. At a $1300 asking price, the Integra DTR-40.5 surely has a lot of features that the customer wants at a price that the custom installer will like.

The Integra DTR-50.5 is the larger and more expensive offering from Integra. At $1700, the DTR-50.5 has 130 watts per channel (7.2) and the same amp design and THX Select2 Plus certification. The DTR-50.5 also has additional digital audio inputs, a differential DAC for the front channels, a programmable remote control, and the company's exclusive Digital Processing Crossover Network (DPCN). DPCN improves the performance potential of bi-amped stereo speakers by eliminating the crossover overlap between the high and low frequency signals to prevent high and low frequency sounds from bleeding into the wrong drivers. Rear panel of the DTR-50.5 receiver

The big difference between the DTR-40.5 and DTR-50.5 is the number of connections on the back. There are 11 pairs of speaker connection (up from 9) for even easier and more flexible connections and configuration. While there is no upgraded Audyssey room correction, the Integra 50.5 does provide for the DSX wide channels.

When streaming services became a common feature in AV receivers,  consumers' first question usually was, "Yeah, but HOW?" Integra Research has the answer with their new DTR-40.5 and DTR-50.5 receivers - wirelessly. With Bluetooth and Wi-Fi built in, and not just offered as a $100 accessory purchase like many manufacturers, this is sure to turn a lot of heads. And custom installer features like 3 12v triggers, IR inputs and outputs, and bi-directional RS-232 ports ensure that more than a few customers will be pushed in Integra's direction - even when the Onkyo counterparts are hundreds less with nearly identical feature sets.

Read the Complete Thread
BoredSysAdmin posts on June 29, 2013 08:38
I'm I the only one confused about $1700 Receiver with inferior Audyssey MultiEQ vs top of the line MultEQ XT32 room correction ??

source: Products
Cos posts on June 29, 2013 06:11
I was surprised on how well that Audyssey works in my bedroom because my room conditions are not ideal and its just MultEQ vs XT16 or XT32.

To get back on topic: As an integra owner, my major complaints with the brand is that they have yet to embrace both HD Radio and ipod compatibility.

I only have the ipod nano, because my Zune HD would not work with my 2012 Infiniti G37sX. You can't just plug in your ipod to the USB of the receivers and expect it to work and no airplay compatibility

It does however offer pretty much any other type of streaming on the market, but is annoying that it refuses to offer this.

On a side note, please don't make fun of me that I purchased a ZuneHD player LOL, it was a great mp3 player
AcuDefTechGuy posts on June 28, 2013 16:41

PENG, post: 974616
I hate to be slightly off topic but I just experimented with running Audyssey in my highly imperfect room where my other 2 channel system is and was also surprised what Audyssey did. It did virtually nothing in my closer to acoustically perfect HT room. So I think you got the key word “imperfect room” right and it is a good thing that Onkyo/Integra stick with Audyssey.

Yeah, I think it differs from room to room. I've tried Audyssey in my HT and family room w/o great success. That's why we hear proponents on both sides. The Bryston, Cary Audio, Rotel group don't even effectuate any sort of RC, while most brands do offer some sort of RC. Of course, some fans of ARC claim that ARC is better and smarter than Audyssey and if you have ARC and you still don't prefer ARC, then you are incompetent.
Rickster71 posts on June 28, 2013 15:59
MSRP: $1,300 (DTR-50.5); $1,700 (DTR-40.5)


^ It looks like the prices are next to the wrong unit.

ACsGreens, post: 974578
This was my first experience with Audssey and I was more than surprised at what it did in an imperfect room. Bass has never been so accurate, speakers adjusted properly (besided some minor tweaking, but hey)

I hate to be slightly off topic but I just experimented with running Audyssey in my highly imperfect room where my other 2 channel system is and was also surprised what Audyssey did. It did virtually nothing in my closer to acoustically perfect HT room. So I think you got the key word “imperfect room” right and it is a good thing that Onkyo/Integra stick with Audyssey.
Post Reply