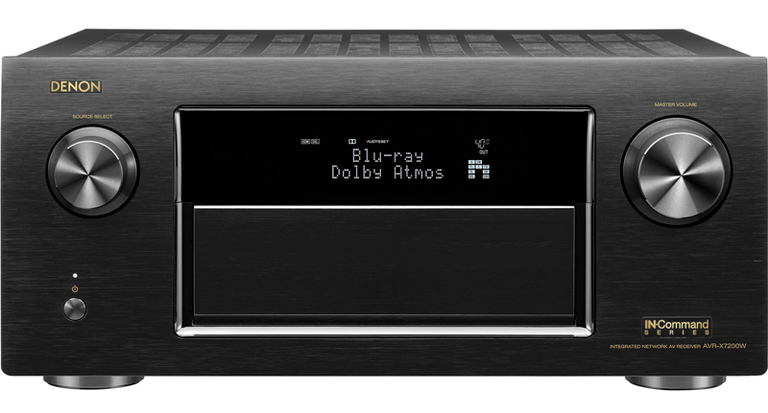 AV receivers are arguably the fastest-changing home theater components.  The introduction of HDMI 2.0 and HDCP 2.2, the rapid rollout of immersive audio formats, and the onslaught of streaming services has accelerated the pace of change even more.  Even the Barry Allen, AKA the Flash, would find it tough to keep up.

Somehow, in the midst of this fluctuating tech landscape, Denon has not only managed to keep pace but also provide a bit of future-proofing in their flagship AV Receiver, the IN-Command AVR-X7200WA. IN stands for “Integrated Network” and puts you on notice that this unit is built for digital entertainment.  The IN-Command X7200WA is the same physical unit as the X7200W except that the inclusion of the “A” lets you know that it contains the update for HDCP 2.2.  The units themselves are indistinguishable except for an "A" on the rear of the unit.

Note: If you are a current X7200W owner, you can get a free hardware upgrade to make your unit an X7200WA. Very cool!

The AVR-X7200WA’s feature-set reads like an encyclopedia.  What’s funny is that there are some features you can’t even use yet. The content, sources, displays (or all three) won’t be available or affordable until next year at the earliest.

On the video side, Denon claims that the X7200WA supports an incredible maximum image processing of UltraHD/4K 60p, 4:4:4 and 24-bit video.  Some UHD receivers will max out at only 10-bit support.  To be fair, there isn’t any commercial content on the horizon that can support that.  The max that we will see in the near term for UltraHD content will be 10-bit, though we will likely start to see some of the new UHD Blu-ray players offering bit-depth upscaling.

Rear view of the AVR-X7200WA.  The amp shows 11 channels of amplification on the rear but only nine can be active at any one time.

Depending on the audio configuration you choose, the Denon shows you exactly which channels are active.

The Denon’s HDMI inputs support HDMI 2.0a and HDCP 2.2.  This is great news for the home theater enthusiast because both HDMI 2.0a and HDCP 2.2 are essential for next generation UltraHD/4K content.  HDMI 2.0a builds upon the promise of the HDMI 2.0 standard and gets you ready for the forthcoming UltraHD Blu-ray players.  High Dynamic Range (HDR) and BT2020 color support are among the most exciting elements--even better than the increase in resolution, which truth be told, isn't that big of a deal unless you are talking about huge UHD displays.

The AVR-X7200WA’s feature-set reads like an encyclopedia.  What’s funny is that there are some features you can’t even use yet.

If you have been following our reports here at Audioholocs then you know that HDR will bring a more life-like quality to content by increasing the dynamic range between dark and bright parts of a scene.  HDR will be most noticeable in the way it adds details to bright elements of scenes that would previously be completely washed out.

BT2020 color support will finally bring us past the limited REC 709 color gamut and greatly increase the colors we can see on screen and decreasing banding.  The bottom line is that the X7200WA’s HDMI 2.0a support will deliver content more in line with the way that we see things in real life and will make UltraHD Blu-ray content much closer to what we see in an actual movie theater.

Let’s reiterate: In order to take full advantage of HDR and BT2020, your display, receiver, and source must all support HDR and BT2020.

On the audio front, the X7200WA sports 9-channels of amplification rated at 150WPC with 2 channels driven.  As avid Audioholics readers will know, many receiver manufacturers fluff their amplification ratings or aren’t honest about them.  We appreciated Denon’s clear amplification specs.  150WPC is about as beefy as you can get without resorting to external amplification. The X7200WA allows you to do that too, with 13 pre-out channels. You can use the X7200WA as a pure pre-amp. Internal view of the Denon AVR-X7200WA

The amplification section is also what Denon calls a “Symmetrical monolithic amplifier design.”  That is simply a fancy way to say that the left and right amplification channels are completely isolated from one another to eliminate the possibility of crosstalk.  You don’t ordinarily find this kind of design in dedicated separate amplifiers, much less flagship receivers.

*For your convenience, we've included a link to Amazon.com to buy this product. As an Amazon Associate, Audioholics.com benefits from qualifying purchases.
Like This? Check out our other AV Receiver Reviews!