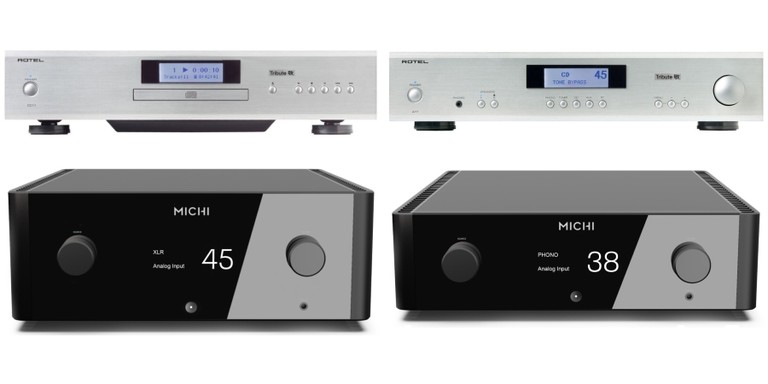 At the end of 2019, Rotel announced the revival of its long-dormant Michi brand, which represents the luxury side of Rotel’s audio offerings. The initial launch included 3 flagship components: the P5 preamp ($4,000), the S5 stereo power amp ($7,000), and the M8 monoblocks ($7,000/each). Now the Michi portfolio has been expanded to include a pair of integrated amplifiers that share the same high-end DNA. The X3 Integrated Amplifier ($4,999) and X5 Integrated Amplifier ($6,999) represent “best-in-class audio engineering methods coupled with the perfect balance of innovation and critical evaluation of every circuit, signal path, and component,” according to Rotel. They certainly look impressive, but these pricy new integrated amps won’t be for everyone, so I was happy to see that the company has also launched a new Rotel-branded integrated amp that sells for just $799. The A11 Tribute integrated amplifier is the result of a cooperative effort between Rotel and the late, legendary audio designer Ken Ishiwata, of Marantz fame. The A11 Tribute amp and the matching CD11 Tribute CD player ($599) were among the last projects that Ishiwata worked on before his death in November of 2019. His friend and colleague, Karl-Heinz Fink, stepped in to ensure that Ishiwata’s vision was executed to meet his specifications and exacting standards. First, let’s take a look at the stunning X3 and X5 integrated amps from Michi. Both are imposing but beautifully-designed units with plenty of class-AB muscle. The X3 weighs in at an impressive 64 pounds, and can deliver a continuous 200 watts per channel into 8Ω, and up to 350 watts into 4Ω. Those needing (or just wanting) more power can move up to the massive, 97-pound X5, which pumps out a continuous 350 watts per channel into 8Ω, and 600 watts into 4Ω, resulting in “near limitless,controlled, bass energy,” according to Rotel. Both units rely on custom power-supplies utilizing “high-efficiency, oversized toroidal transformers feeding independent analog, digital, and power-amplifier voltage regulator circuits for optimal power isolation.” The X3 features 13 inputs, including a balanced XLR input and a moving-magnet phono input, plus a variety of digital inputs. The X5 adds a moving-coil phono input as well, for a total of 14 inputs. Both units have advanced DAC sections built around AKM DAC chips, though the 32-bit, 768-khz DAC in the X5 includes a few upgrades over the X3’s DAC. If you plan to decode MQA, or 32-bit PCM — you have tons of files in 32/384, right? — you’ll need the X5, as the X3 maxes out at 24/384 and can’t decode or render MQA. Both can handle DSD via their USB inputs. Other than the X5’s bigger size, greater power output, MC phono input, and more advanced DAC, the two Michi amps are largely the same, inside and out. Both utilize what Rotel calls “direct-path circuit topology,” which “further isolates sensitive audio signals and processing from the high current amplification stage, lowering the noise floor and delivering an improved sound field.” Both offer sleek design, apparently excellent build quality, and a high-resolution front-panel display that can be configured to show the amplifier’s operating status, a 12-band graphic EQ, or a peak power meter. If your amplifier budget is strictly in three-digit territory, Rotel hasn’t forgotten about you. The A11 Tribute integrated amplifier looks like a great piece of gear for $799, but some background information is necessary before we can see what it has to offer. Ken Ishiwata worked for Marantz for some 41 years, helping to usher the company through generations of change in the audio industry without losing sight of its goal to deliver that famous Marantz sound. During his tenure at the company, Ken became famous for his memorable demonstrations at audio shows, where his stylish attire, unusual musical selections, and highly effective audio systems left lasting impressions on show-goers, myself included. As a designer of audio gear, Ken developed a reputation for his ability to tweak or “tune” an existing design by making carefully-chosen upgrades to the circuitry and chassis. In many cases, he could make a given piece of gear sound significantly better for only a modest increase in price. Over the years, Marantz offered a number of signature “KI” models, which had been given Ken’s special treatment. Ken earned the respect of just about everyone in the audio industry, including Rotel’s Chief Technology Officer, Daren Orth. The two became friends and often spoke of working together, should the opportunity arise. After Ken retired from his role of international brand ambassador at Marantz in the spring of 2019, that opportunity to collaborate finally came knocking.

Having both been in the Hi-Fi industry for a similar amount of time, I was in the same audiophile circles with Ken over the years, as were the Tachikawa family in Japan – founders and owners of Rotel. There was mutual respect of the talent and market position and a long desire to work together but the opportunity never arose. An opportunity did finally arrive in the late summer (of 2019) when the initial discussions began, with the project becoming a reality in September. All of the Rotel engineering team were delighted at finally having the opportunity to work with Ken.

The folks at Rotel were keen to have Ken work his magic modifying the existing Rotel A11 ($699), a 50-watt class-AB integrated amplifier that had just won the prestigious “Best Buy Amplifier of 2019” award from EISA, the Expert Imaging and Sound Association. Could Ken make this award-winner even better? The Rotel CD11 CD player ($499) would also get tuned up to be offered as a companion source component. As a Rotel fan, Ken was already familiar with these products and wasted no time coming up with a list of modifications to make; he then supervised the production of the first prototypes. The Rotel team agreed to Ken’s proposed changes in the early Fall of 2019. But tragically, Ken Ishiwata died unexpectedly that November, at age 72, before the project could be brought to completion. The Rotel team later contacted Ken’s children to ask what they thought of the idea of continuing with their father’s final project, as a tribute to his immeasurable contribution to the world of hi-fi. They enthusiastically approved, and it was then that Ken’s friend and fellow audio designer Karl-Heinz Fink offered to oversee the remaining stages of product development and production, ensuring that Ken’s original vision was realized.

The best way to appreciate Ken’s handiwork would be to listen to his creations, but taking a look inside can be educational, too. Ken had a good starting point with the original A11 integrated amp. Like all of Rotel’s amps, it boasts a large toroidal transformer and a clean circuit board layout. The A11 Tribute simply takes things to the next level. In the preamp section, six capacitors were upgraded — that’s over half of the components in the signal path. Ken also replaced all 10 capacitors and 2 resistors in the signal path of the amplifier stage with specially-selected parts. The six capacitors used in the volume control were upgraded as well. Finally, Ken strategically applied damping materials to the chassis in order to reduce resonance, dampen vibrations, and better isolate the internal components from mechanically-induced distortion. The results of these modifications, according to Rotel, include increased resolution and detail, improved rhythm and timing, and an overall more musical presentation. The A11 Tribute integrated amp offers 4 line-level analog inputs, one of which can be configured as a home theater bypass. There’s also a moving-magnet phono input. The only digital input is apt-X bluetooth, but in my opinion that’s no big loss, as the included DACs in affordable integrated amps often leave much to be desired, and end up being outdated after just a few years. (If you want a future-proof amplifier, keep it all analog.) The A11 Tribute does include a set of preamp outputs, making it easy to add a subwoofer or upgrade to an external power amp down the road. The front panel offers bass, treble, and balance controls, along with a dimmable LCD display.

The CD11 Tribute CD player was also tweaked both mechanically and electrically to improve overall performance. First, Ken upgraded all 9 capacitors in the power supply and made changes to the electrical grounding. In the DAC stage, he replaced 8 capacitors and one resistor with upgraded parts, before turning his attention to the mechanical damping of internal vibrations. Specially-chosen damping material was applied to the upper cabinet cover, which is a common problem area for vibrations and resonance in a CD player. The basic stability of the unit was enhanced via further physical tweaks.

Ken Ishiwata was passionate about spreading the love of music and audio to as many people as possible, and that’s why he wanted to help create excellent affordable products like the Rotel A11 Tribute and CD11 Tribute. That said, if you want to experience the ultimate expression of Rotel’s commitment to high-end audio, the pricier Michi amps may be more your speed. All of the above are available to purchase now. When it comes to your own audio gear, do you keep it cheap and cheerful, or do you go all-out for the expensive stuff? Share your thoughts.

Big-Q, post: 1482337, member: 91457
I look for “bang for the buck” at whatever price point you can afford. I am currently in the market for what will probably be my final two-channel system. These are on my list to check out (X3 most likely).

You'll be a daisy if you do. The 50 x 2 fits in with hobbyists. Rotel hasn't put out much over the last few years not that I can recollect.
Big-Q posts on May 10, 2021 16:11
I look for “bang for the buck” at whatever price point you can afford. I am currently in the market for what will probably be my final two-channel system. These are on my list to check out (X3 most likely).
gene posts on May 09, 2021 03:16
Rotel has expanded its luxury sub-brand, Michi, with a pair of beefy Class-AB integrated amps: the Michi X3 ($4,999) and X5 ($6,999). For the entry-level Rotel customer, the company has a pair of affordable products designed in collaboration with the late Ken Ishiwata of Marantz. The A11 Tribute integrated amplifier ($799) and CD11 Tribute CD player ($599) are based on existing Rotel designs, with upgrades and tweaks selected by Ishiwata shortly before his death in November of 2019.

When it comes to your own audio gear, do you keep it cheap and cheerful, or do you go all-out for the expensive stuff? Share your thoughts.
Post Reply