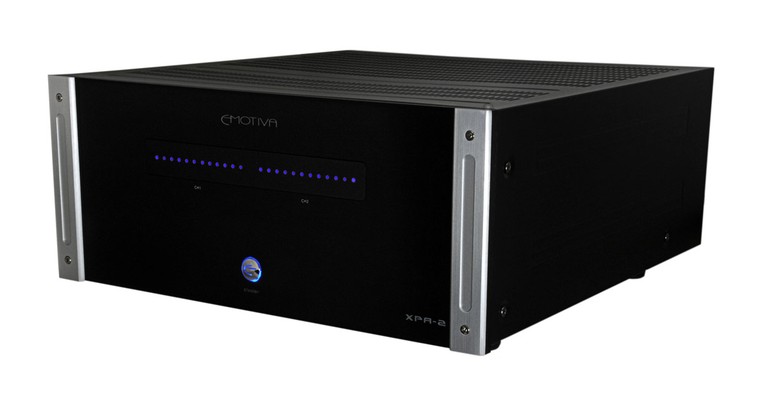 When Emotiva first announced at our 2007 State of the CE Union a complete new line up of amplifiers coming in 08, I couldn’t help but wonder what was wrong with their existing one. Their current lineup was built on a solid platform with high efficiency thanks to its Class H topology, individual mono block construction, and quality parts throughout making them an uncommon value in the marketplace.

Emotiva President Dan Laufman told me they are taking things up a notch with their new XPA line that not only sports their updated improved cosmetics but also ramps power and performance up to the level one would expect in products costing insanely more money than their asking prices.

Enter the new XPA-2. This baby is armed to the teeth with electronic goodies, weighing in at around 75lbs and boasting a 1600VA transformer and over 60,000 uF of power supply capacitance. The prototype pics show 10,000uF 50V caps from their prior designs but these are just place holders. Since this amp has +-85V rails the production units will have 100V 105 deg C rated capacitors. According to Emotiva, the XPA-2 will deliver 250wpc into 8 ohms / 500wpc into 4 ohms with both channels driven and power hungry folks even have the ability to bridge the outputs to achieve a whopping 1000 watts. With such a large power supply, I suspect this amp is grossly underrated and can’t wait to test my suspicions soon.

The XPA-2 continues the Emotiva tradition of quality construction throughout with glass epoxy pc boards, 1% resistors, Metal film capacitors, soft start circuitry (does not have a current spike on start up), dual stage rectifiers and secondary capacitance. The XPA-2 is a compartmentalized design for greater isolation from noise. The transformer is mounted in its own super structure, and the XPA-2 sports auto rail detection relays and amplifiers are all fully shielded. The unit has switches for turning the metering and or the status LEDs on or off. This is a no holds barred design and according to Emotiva, every aspect of the amp was designed for superior performance.

Based on these specs, one would think this amp would sell in the neighborhood of at least $2k but one would be grossly mistaken. Emotiva is only asking $799 for this baby! With such a low asking price and based on my past experience with Emotiva, this is likely to become a trend setter that will raise the bar for the competition to pick up their pieces when they realize their solutions don’t even come close to this at twice the price. This is one product I am most eager to review.

For anyone interested in pre-ordering this amp, send an email to [email protected] with a subject header stating XPA-2 pre-order. Include your name, address, phone number and they will put you on the list after my name of course ;)

Read the Complete Thread
DavidW posts on November 01, 2008 07:25
Pardon the ignorant question, but can someone tell me the PRACTICAL advantage of mega-capacitance and gargantuan transformers? What difference will I actually hear?
AcuDefTechGuy posts on February 12, 2008 14:12

mouettus, post: 371122
Too bad emotiva (all their products) didn't do their job on the esthetic side.

They can be turned off.
As well, what difference would it make when you are watching a movie, or listening to a song.
Do you stare at the amp when you do those 2 things (movies & music).
Heck, I keep the lights dim, they would be hard to see unless you were 5 feet from them.

Anyhow, I have put in my order for both of them
1 each of the XPA-2 and XPA-5.
Wonder if I will get 2 T-shirts.
mouettus posts on February 06, 2008 12:52
Too bad emotiva (all their products) didn't do their job on the esthetic side. I simply hate its looks. I would love to be able to have one of those in my rack especially for that kind of money but it just looks like a kid's toy. I think the blue leds are turning me down.

That is subjective for sure. I know a lot of you find them beautiful and I respect that.

As of tastes, my heart goes to Rotel. RSP-1068 + RMB-1075 = drool. The worst part of that is I nearly got them. But their inability for HDMI audio kept me out. Went for a good Yamaha instead.
Post Reply