Shooting People in 3D: Speeding up the Stereoscopic Workflow 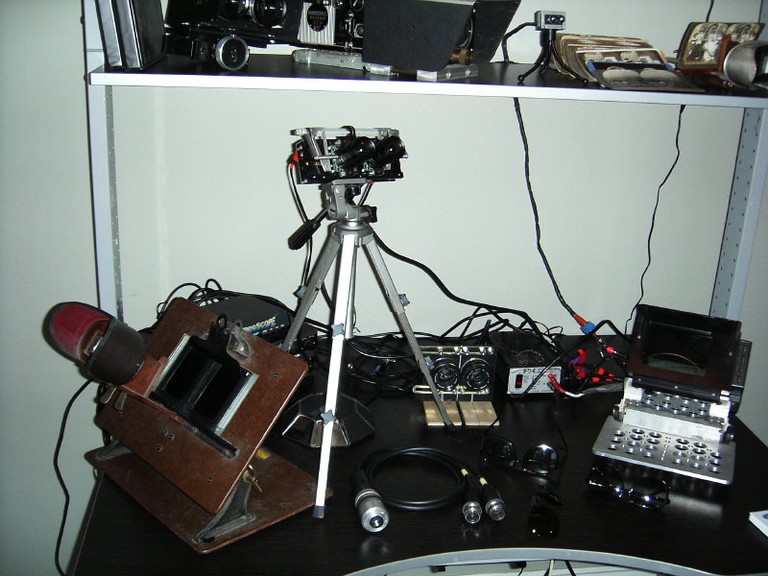 If there’s anyone that doesn’t LIKE the idea of seeing something in 3D, point them out. I’d say, “Hey what are your two eyes for anyway?” But with the exception of the occasional movie, 3D isn't what we have when we’re watching a film in a theater or viewing our TV or iPod or cell phone. And why? Because 3D isn’t easy to shoot - forget about digital software that turns animation into 3D, the real deal is filming with humans. Filming flesh and blood people.

So going to the Stereoscope facility in Burbank, CA to see a hands-on working demo of 3D is appealing, if a bit intimidating as to the level of the technology that must be understood. But I’m keen to build up my knowledge of 3D, especially since one of the companies there, SpectSoft, is doing some interesting things that make creating 3D quicker and easier.

Entering Stereoscope’s offices, I weave through the halls until I come to the very large production area. To be honest, I don’t recognize most of what is filling the room (then again, I hadn’t had much luck identifying the 3D viewers and other paraphernalia from the past that was on display in their lobby). Oh sure I can guess that the guys and girls wearing the jumpsuits are involved in motion-capture, and seeing double images on Samsung rear-projection DLP’s indicates that 3D is being shot and delivered for viewing (and that I should pick up a pair of those 3D glasses that are lying around). I get that the 3D Stereo Rig designed to hold two cameras for stereoscopic photography, is modular in design. I get that those emitters on top of the Samsungs are there to sync with the LCD glasses for 3D viewing, but overall this isn’t like some trade show with booths and a well defined path to travel between them; think more of a free for all, with computers and other equipment scattered around this very, very, very large room. So I hug the wall where a couple of tables hold equipment for Mobile Motion - a company whose IBC MOBILE MOTION is an all in one system you can rent as you need (a few days, a few weeks, etc.) Back support, of course, is provided for building, running and processing a motion capture. They provide engineers, animators and technical directors expert in mo-cap and are ready to help. Eric Antoine, Lead Sales Engineer, says that they attended this event to show just how easily the tech can be up and running for use. “A person can be suited and booted as we like to say, and begin capturing motion in minutes,” he says.

Antoine also points out that while 3D and motion-capture are not entirely new to the entertainment industry, they are technologies that are ever-changing technically. “Not only is the tech becoming more user friendly,” he says, “but we predict that in the future people will be using these systems in their homes, capturing motion and filming in 3D! We wanted to bring these two technologies together at the show because we truly believe that they will make waves not ripples; very soon in the entertainment industry.” Next there’s Stereoscope, whose facility is housing the various companies for this demo. Stereoscope sees themselves as a next generation studio designed for the production of 3D motion pictures, television and web based content (or as they like to put it, from Imax to iPhone). Their studio employs a team of 3D experts and they’re shooting 3D as we speak, using multiple 3D camera rigs including dual Iconix 2K cameras on a doggie cam system that most resembles someone from the distant past of holding a bar with a camera on top. Only in this case there are two cameras side by side and plenty of wires trailing out from behind. Herb Dow, VP Business Development, points out that 3D as the future of viewing is in a perfect storm situation. “We have had multiple successful films released in the last few months, with the grosses being 70% 3D versus the 2D screens,” he says. He adds that there has been a growth of camera technology to capture stereo, but most importantly, the sale of 11,000 Sony 4K projectors to exhibitors. As for television - the recent NAB show found every every major manufacturer exhibiting their in home 3D systems and add to that the fact that SEMPTE has agreed on a standard for broadcast. Dow sees this event as a success, as the open house has shown the interest that 3D is generating, with most of the major studios sending in teams to learn about the workflow. But it’s SpectSoft who commands my attention - they’re the folks who organized this event after all. Plus it’s their 3D software that’s powering the views on the monitors I’m looking at. So understanding a little about the company seems in order - and for that I turn to Jason and Ramona Howard, who founded the company back in 1979. Jason is hunched down over a computer, crunching keys like a madman, so it’s up to Ramona to tell me that they did not set out to do 3D (stereoscopic) work from the start; in fact most of their customer base still works in traditional workflows. But she points to the ease in which one could switch to doing 3D using their “Rave” digital disk drive system. “When we originally designed Rave, we knew it would eventually be used for working in 3D, therefore we kept the design very flexible,” says Ramona. “When the need did roll around, 3D support was added easily.” So this seems a good point to ask her to explain the setup that is being shot in 3D - for us to say that there is a girl breaking eggs into a bowl with cameras and very bright lights surrounding her seems inadequate at best. Ramona points to the dual Iconix cameras mounted on the doggiecam, and which are aimed at the bowl. “Out of these HD Iconix cameras we are pushing dual, dual Link - that is to say 4 HD-SDI cables. We are also pushing to the Iconix Tri-Sync reference, which is all being pushed over a single Telecast fiber cable." “The dual link (dual 4:4:4) HD-SDI is being brought into the Stereo Rave2K where we are capturing uncompressed full scale right eye and left eye DPX frames,” says Ramona. “The output of the Rave, which is doing a real-time color-space conversion to 4:2:2, is being pushed to 3d Live (more on that in a bit). Coming into 3d Live are two HD-SDI 4:2:2 streams, which we are presenting as stereo images in many flavors. The DLP supports both Shutter and Anaglyph. Also, any adjustments being made to the images (convergence, etc.) is all being done before the 3D images are being created." The entire process has about a 4 frame delay from camera head to visually seeing the 3D images, with the camera systems being used all providing HD-SDI outputs (3d Live requires sync'd SDI streams to display 3D images.

The importance of the 3d Live software can not be overplayed, as prior to its inception there really wasn’t a portable monitoring solution for 3D. “It allows one to see how things will look in 3D, adjust images as needed, set up rigs and the like,” she says. “It is a tool to aid in making 3D good from the start, while offering information that can be sent to post when corrections can't be made on the rigs themselves. It requires 2 sync'd streams, and in our case we often show those coming directly off the Rave.”

What makes 3d Live worth thinking about is how it speeds up the 3D creation process. 3d Live takes in Dual SDI streams and mixes them in real-time to stereo images, with the software providing an easy on-screen way to switch between 4 versions of anaglyph and the Shutter glass support for the 3D ready DLPs. “It wasn’t until we stepped out into the field (production) that we discovered there was no real way to see 3D,” she says. After seeing a production go through the elaborate set-up of dual projectors and a screen, she and Jason realized they could provide a solution and so did this out of necessity. “By proving the ability to see how shots look, before you roll a single frame, that is huge. It saves time and money and can ultimately produce better quality images. After all not all things can be fixed in post,” she says. But she also adds that 3d Live isn't meant to take the place of being lazy on the cameras, but rather as a tool to help you do 3D a bit faster.

Rave currently supports up to 16bit 2k images that can be either full or SMPTE scale. When fed to a viewing device that can do the same, you have an exact representation of what resides on the disks. Plus there is absolutely no color shifting and or compression within Rave if you should so choose. Ramona notes that Rave is currently in use worldwide, and that a large animation facility will be releasing their first 3D movie in July, in which several Raves were used in the workflow. She also points out that 3d Live is just emerging, with several facilities taking delivery, and that a free version (minus some features) is available to those who wish to get their 3D feet wet. But as I turn to leave, she cautions as to the “dark side” of 3D. “Remember," she says, “a standard filmmaker can pick up a camera, shoot something anyway he/she likes and even if shot badly they can be considered artistic. But do that in 3D and your audience will be running from the theater for the restroom, holding their heads, cursing 3D. So maybe if filmmakers can see it for themselves on-set, they will think twice," she grins.