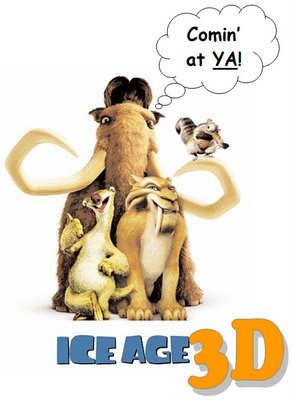 Mitsubishi debuts a new line of 3D HDTVs Meanwhile as theaters across North America prepare for another salvo of movies featuring video’s third dimension. At least one studio and movie theater chains are now squabbling over who pays for those plastic glasses handed out before the show. It’s part of the growing pains of the entertainment industry’s latest frontier. But there’s a serious philosophical question that just isn’t part of the dialogue on 3D cinema. Is it really even necessary?

We congratulate ourselves on our technical prowess all the time. We don’t just buy the latest technology we have cults of gizmo-lovers (myself included) who read about them on websites like Engadget.com. It’s just as entertaining to read about clever new technologies as it is to wonder who in the world would actually want something like that. It brings to mind an old philosophical question – just because we can do something, does it mean we should?

It’s clear that 3D movies are in demand. Chief of DreamWorks animation studios, Jeffery Katzenberg hails the Tru3D process used in Monsters vs. Aliens as the future of cinema. Anytime a 3D version of a film competes directly with its 2D counterpart the box office results are always heavily in favor of the visual effect.  And why not! Who wants to see a movie made for 3D with the primary reason for seeing it stripped down into mere two-dimensions?

Fox has caused a stir by saying it won’t fund the 3D glasses given out at showings of its upcoming Ice Age 3: Dawn of Dinosaurs, to be shown in full 3D. As a retort a few leading Cinema chains have said they simply won’t show the film in 3D, including Cinemark, AMC and Regal.

As the price of HDTV has been dropping to affordable levels the next dimension in home entertainment is getting ready. Mitsubishi has just announced a line of 3D-ready TVs for your home theater. The prices almost sound reasonable if you consider an 82-incher is running for $5,000. But keep in mind these are not flat panel LCD sets as is being widely misunderstood. They’re DLP, a rear projection micro-display technology. The new Mitsubishi sets include 3D-Ready1 technology. So, whenever home-3D cinema gets off the ground you’ll be ready to have Monsters and Aliens jump out at you.

But one nagging question remains – is all this 3D anything more than a distraction? Sure, it’s a cool effect for certain material. I took my son to see Monsters vs. Aliens recently and it was a great time at the movies, although many of the scenes seemed to exist only to support the added visual dimension.

In his review of the most recent 3D film; Monsters vs. Aliens, Roger Ebert said of the visual effect: “Younger moviegoers may think they like it because they've been told to…”.  It might be a harsh judgment for a kid’s film that aims to showcase the effects. But you can certainly see his point that the trend could be worrying if studios believe any film would be enhanced with 3D.

Can 3D become as ubiquitous to cinema as color?

Color truly brought something to film. Sure, we don’t want to see the grayscale classics colorized but overall the addition of color has created a visual feast for the eyes. Can you imagine many of the modern classics without color?

But if you care about film as a media for story-telling, 3D brings almost nothing to the table. Even with the best the technology has to offer, it’s still no more than a side-show thrill.

Color on the other hand, is an important part of our vision. Color was as inevitable an advance as talkies. Without color we miss much of the picture. Shades of grey simply can’t convey the same information as full color film. The same can’t be said for 3D.

Depth perception already exists in 2D movies. We’re capable of seeing perspective in two-dimensional images without a special effect to enhance it. A special effect that makes an on-screen object seem to jump out at you is just not required to tell any portion of a story through the medium of film. Although it can certainly be fun! That 3D fun-factor would utterly destroy many great movies.

Having seen and even enjoyed the remarkable 3D effects available nowadays, I’m left with the conclusion that it’s just a distraction. It’ll always fit for certain titles specifically designed to exploit the effect. But it’s an effect that can never simply fade into the background and let the actors and director tell the story. It’ll always remain the proverbial giant monster in the room, which is fine if you’re watching a movie about giant monsters.

Has anyone seen Coraline in RealD?

It was NOT computer animated, it was filmed using cameras. It was the single most amazing 3D imagery I have ever seen and I don't think the same could be said for the 2D version (albeit I have not seen it in 2D). 3D should come, and it should come to all movies that the directors choose to have it in, soon. RealD is the type of technology where you wear “normal” glasses, and can literally look around at the move screen in any direction and see clear 3D images 100% of the time. My jaw dropped for the first 10 minutes of the movie, until the 3D film became normalized, now when I look at a normal film, I miss the 3rd dimension terribly.

I recently saw M vs. A in IMAX 3D, and I must say, while it was good, it was nowhere near as good as the 3D implemented in Coraline (RealD)

Does anyone have any details on the differences between the various 3D technologies that exist in theaters today?
ned posts on April 14, 2009 15:54

Wayde Robson, post: 552752
Interesting thing is… Yes, it's an important part of sensory experiences but it already exists in movies without 3D effects.

Depth perception has been painted on flat canvas since the Renaissance artists came up with perspective. Paintings (photographs and moving pictures) have created depth perception ever since.

No, the 3D effect isn't required to see depth in film. That's why it's kind of a gimmick.

My spin here was just that 3D is not (as some in the industry want you to think) as inevitable as color in film.

Color is required to see the real color of Lauren Bacall's dress, or the shades of a sunset. B&W films where these things come up in dialogue isn't pertinent to the audience due to limitations of the technology. That's why, as compelling an experience as a black and white film can be, color was an inevitable improvement.

Knowing and experiencing it are 2 different things. 2 D images let you know that there is depth with out the need for sensory stimulus. There is however a learning curve - which means you need to get use to it which could be spontaneous if done right especially in animation but not so with film.

Sensory stimulus is what I'm pointing out not the knowledge that a depth is present in a presentation.

Gimmick or not it does stimulate your depth perception.
Wayde Robson posts on April 14, 2009 10:23

ned, post: 552575
It's true that you don't need 3D for story telling however 3D depth perception (not 2 D) is an important sensory experience. Try driving/walking with one eye!

Interesting thing is… Yes, it's an important part of sensory experiences but it already exists in movies without 3D effects.

Depth perception has been painted on flat canvas since the Renaissance artists came up with perspective. Paintings (photographs and moving pictures) have created depth perception ever since.

No, the 3D effect isn't required to see depth in film. That's why it's kind of a gimmick.

My spin here was just that 3D is not (as some in the industry want you to think) as inevitable as color in film.

Color is required to see the real color of Lauren Bacall's dress, or the shades of a sunset. B&W films where these things come up in dialogue isn't pertinent to the audience due to limitations of the technology. That's why, as compelling an experience as a black and white film can be, color was an inevitable improvement.

I see what you're saying. But you're talking about different forms of media - which I believe the 3D movie really is. 3D movies are a bit like watching a sporting event, WWE or a live play or concert at the movies instead of someplace those activities usually take place. It's not a movie - it's a different experience.

That's why it's difficult for film critics like Roger Ebert to review them as films. He has to take them on their merit as a movie only. He's only slightly more qualified to review Friday the 13th 3D as he is a Star Wars video game.

I'm not saying these other mediums are a waste of time.

But when you start putting on a helmet and experiencing holographic “stories” as if you were in the middle with full sensory input - it's not a movie.

Who knows… one day in the future people may look back on 2D movies like today look back on those little booths from 1920s Penny Arcades where you turned a handle to advance the frames of a short, silent video such as a hula girl or Babe Ruth hitting a homer.

Those weren't movies either.
ratso posts on April 13, 2009 21:08
saw “meet the robinsons” in 3D when it came out with my wife and kid and we loved it. not only the movie, which was sadly kind of ignored and really a pretty good kids movie, but also the 3D. it was really cool, worked well in the story line, and much to my surprise didn't give me a headache. i could see a lot of potential for artistic abuse here, but really no more then CGI or any other special effect.
Post Reply