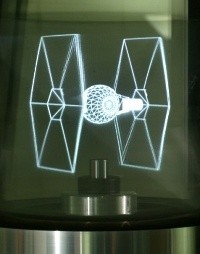 The USC Institute for Creative Technologies has developed a set of rendering techniques for an autostereoscopic light field display able to present interactive 3D graphics to multiple simultaneous viewers 360 degrees around the display.

The display consists of a high-speed video projector, a spinning mirror covered by a holographic diffuser, and FPGA (Field-Programmable Gate Array) circuitry to decode specially rendered DVI video signals. The display uses a standard programmable graphics card to render over 5,000 images per second of interactive 3D graphics, projecting 360-degree views with 1.25 degree separation up to 20 updates per second (Hz).

The USC Institute has nailed down the system's projection geometry and its calibration process, and they have presented a multiple-center-of-projection rendering technique for creating perspective-correct images from arbitrary viewpoints around the display. This projection technique allows correct vertical perspective and parallax to be rendered for any height and distance when these parameters are known, they have even demonstrated the effect with interactive raster graphics using a tracking system to measure the viewer's height and distance. In addition, they further applied their projection technique to the display of photographed light fields with accurate horizontal and vertical parallax. Color imagery is also taken into account, though is not as far along.

The system is incredible and there is a video on the website (via YouTube).  Basically a mirror, coated with a holographic diffuser, spins at 20Hz and allows you to view the projected image (motion or static, raster or vector) in full 3D from any angle. You can even get a lot of elevation so as to look down on the object.

Interactivity was demonstrated as well so that vector objects could be rotated in full 3D space, allowing views from all directions and sides. The medical aspects of this technology are endless - think about combining this with an MRI, for example. For consumer use, I could see this working with some kind of video game technology to create a truly immersive experience for players where they could truly see all aspects of a scene.

The system was demoed at SIGGRAPH 2007 but we hope to see it at next year's CES as well. This is something I certainly want to view up close and personal. Bring on the holograms!

One, that display is brilliant. Even if it turns out to be unusable for professional or consumer uses, it's still awesome.

Two, there are far too many people in this world with Internet access and a pathological need to vomit personal opinions in bad English to the world (see the comments on the YouTube video).
mike c posts on September 04, 2007 19:56
i'm thinking it's usage would be the same as in minority report.
davo posts on September 04, 2007 19:27
That was freakin' cool. Definite potential in the medical field, though I don't know how it could be developed for movies because you need back-drop scenery.
I'm sure some one will think of something.

Very cool though.
stratman posts on September 04, 2007 19:26
Couple that with 360 degree audio! Lets hope this technology materializes, soon and that there won't be a competing technology to hinder it's introduction and adoption.
BMXTRIX posts on September 04, 2007 19:18
Okay, that's just insane. Anytime someone invents a 3D mid-air projection item they should know that they need to display, first and foremost, the plans to the Deathstar.