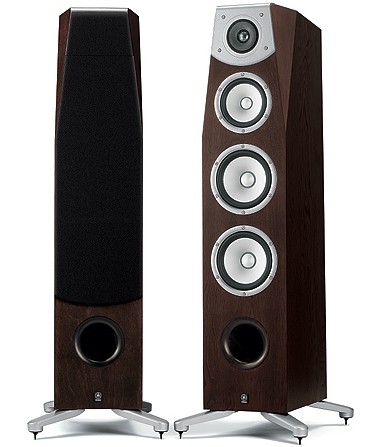 Considering Yamaha has such a good reputation with making fine instruments the introduction of their new Soavo series loudspeakers is no surprise. We put the Soavo-1 towers through its paces and they convinced us that Yamaha has successfully re-entered the realm of high end home audio.
Next Page ⇨

Read the Complete Thread
Seemoss posts on August 01, 2008 06:40
Yes, according to Yamaha's Soavo-1 brochure (PDF) Solen metalized polypropylene capsitors are used. But your pictures shows the tweeter net-work, I think, as Yamaha's photo of the Woofer crossover features several capacitors and resistors, not just two.
Could the subdued mid-range be due to the loss of the “Wave-Guide-Horn” in the Soavo-1, rather than the driver design? But why has Yamaha stopped using its White Spruce (WSD) cones. It was claimed, at the time, to the “world's lightest cone material.”
Clint DeBoer posts on June 24, 2008 16:19
That is certainly possible. We couldn't really take apart the speakers further. What's odd is that Yamaha peer reviewed the article for technical accuracy and said nothing…
mardelgo posts on June 24, 2008 13:09
“Uses electrolytic caps in series with tweeter”

Pheaton, post: 379643
Hi,
Glad I could help. I purchased my Macross Plus soundtrack back when it was released in the US. Now I would try ebay.

If you are a fan of Macross Plus music you might also like the music from Cowboy Bebop. It was written by the same person, Yoko Kanno. The opening song from Cowboy Bebop is called “Tank”, and I think it just rocks!

Good luck with your speaker search and your CD search.

i already have the best of cowboy bebop, and also escaflowne: lovers only. they are very good. if u think cowboy is good, then u most definitely seek out escaflowne if u like orchestral work ( for example carmina burana or conan the brabarian soundtrack). no ebay for me, too many fake ones. so i will get them from hmv japan.

By the way, those are some of the cutest baby pictures I have ever seen. They make me smile everytime I see them.