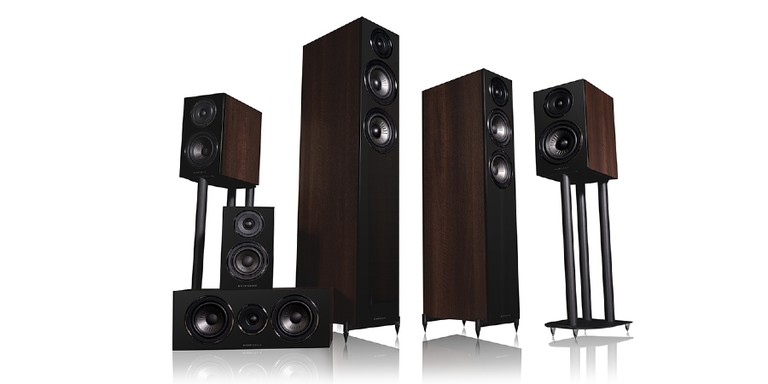 Who makes the best inexpensive speakers? Without a doubt, Elac’s Andrew Jones and PSB’s Paul Barton have proved themselves to be among the most capable designers of affordable high-performance speakers, and that’s a big part of what makes them household names in the audio world. If the name Karl-Heinz Fink didn’t pop into your mind alongside Jones and Barton, it’s not because Fink is a newcomer on the scene. In fact, he is one of the most successful and respected loudspeaker designers in the business. But because he isn’t the face of a well-known speaker company, Fink doesn’t enjoy the same name recognition among consumers that some of his colleagues do. Behind the scenes, however, Fink and his Germany-based firm Fink Audio Consulting have been in constant demand for years. Fink has developed driver and loudspeaker designs for an incredible list of audio companies, including Tannoy, Boston Acoustics, Denon, Yamaha, Naim, Mordaunt-Short, and countless others (some of which would rather not admit that they farm out their speaker design to an outside consultant). Recently, though, some companies have realized that having Fink’s name publicly attached to a new product is a very good thing, as his reputation carries with it a track record of class-leading sound from modestly-priced gear. The UK company Q Acoustics has garnered quite a following here in the States over the last few years for its impressive affordable loudspeakers, while its more ambitious flagship Concept 500 floorstanders earned a coveted “Class A” rating from Stereophile. That’s all thanks to Karl-Heinz Fink. And when Wharfedale set out to completely redesign its celebrated Diamond range of affordable loudspeakers, Fink got the call. If Karl-Heinz Fink is not yet a household name in the audio world, I think that’s about to change.

It’s not about having the right equipment – anyone can buy that. It’s more to do with knowing the questions to ask, interpreting the answers, and constantly learning and investigating.

Wharfedale had already been in business for 50 when it launched the first Diamond Series loudspeakers in 1982, but for many contemporary Wharfedale fans, the advent of those first Diamonds was really the birth of the modern-day Wharfedale as we know it now. While the company still makes some superb high-end offerings, such as the $10,000/pair Elysian 4 flagships, it’s probably best known (especially here in the USA) for the value-oriented Diamond Series. Simply put, the Diamond Series has been one of the most successful speaker lines of all time. And over the last four decades, it has maintained its success by constantly evolving into new and better incarnations of itself. The latest of these is the Diamond 12 Series, which is a completely new design from the ground up, with new drivers, crossovers, cabinets, and a refined aesthetic design. The lineup comprises six different models, including three bookshelf speakers, two floorstanders, and a center-channel speaker. The smallest is the Diamond 12.0 bookshelf speaker, which sells for just $299/pair. The medium-sized Diamond 12.1 bookshelf speaker ($399/pair) is the unofficial flag-bearer of the range — its size and price tend to make the “.1” speaker the most popular in each generation of the Diamond lineup. The larger Diamond 12.2 bookshelf speakers are $499/pair. That leaves the compact Diamond 12.3 floorstanders ($798/pair), the beefier Diamond 12.4 floorstanders ($998/pair), and the one-size-fits-all Diamond 12.C center-channel speaker ($299/each) to round out the range.

All of the Diamond 12 speakers feature newly-developed mid/bass drivers using a proprietary cone material called “Klarity,” which replaces the kevlar used in previous versions. The material is composed of Polypropylene (chosen for its low-distortion characteristics) infused with mica, which reportedly adds stiffness to reduce flexing within the cone. The combination yields a lightweight cone with “high rigidity, low colouration, and lightning-fast response,” according to Wharfedale. Molded radial ribs in the cone were added to provide further stiffening. Fink and his collaborators at Wharfedale also paid special attention to the surround and its dampening properties. The goal was to deliver enough dampening for the driver to achieve a smooth frequency response, but not so much dampening that the bass was softened or the dynamics limited. Wharfedale claims to have struck the perfect balance in the end, achieving “both low coloration and expressive dynamics,” through the use of a custom-designed low-damping surround, and by testing a wide variety of cone geometries via computer simulation. In order to reduce distortion and intermodulation generated by the motor system, the Diamond Series speakers employ a precision-made magnet system with an aluminum compensation ring, which is designed to limit the effect of variations in inductance as the voice coil moves. The voice coil itself is wound on a high-power epoxy/fiberglass bobbin (a.k.a. the former onto which the coil is wound), which Wharfedale says is unusual for such an affordable line of speakers. The epoxy/fiberglass material is much stiffer than Kapton (which is often used in less expensive speakers) and doesn’t produce eddy currents the way aluminum does. The result is greater power handling and greater structural integrity in the voice coil.

The new 1-inch tweeter in the Diamond 12 Series is made from a woven polyester film treated with a high-loss damping coating “to deliver open and smoothly extended high frequencies.” By optimizing the tweeter’s magnet system and the design of the front plate, Fink and his team sought to achieve wide dispersion and uncompressed behavior from the tweeter. The tweaked magnet system reduces compression, resulting in lower distortion at high volume levels. The flat front plate has been designed to expose as much of the dome’s surface area as possible, with no exposed screw heads or other obstructions to induce diffraction. A short duct on the plate improves the SPL measurement and balances the acoustic load, and the tweeter system as a whole contributes to a “broad, deep, and stable soundstage that will envelop you within the music,” according to Wharfedale.

Wharfedale claims that the crossover used in the Diamond 12 Series is “far more sophisticated than one usually finds in speakers in this price class.” It uses a Linkwitz-Riley 24dB/octave topology featuring high-end air-core inductors, which are typically used in more expensive speakers and are prized for their low distortion. According to Wharfedale, choosing not to skimp on crossover components is just one of the reasons why the company has earned a reputation for fatigue-free sound that invites long listening sessions. Because the resistance of the air-core coils is higher than that of a standard laminated steel or ferrite core inductor, Fink and his team had to modify the magnetic structure of the mid/bass driver to compensate. The result is “fast, clean bass with no distortion from the inductor.” While the bookshelf speakers and center-channel speaker are all 2-way designs, both the Diamond 12.3 and 12.4 floorstanding models are 2.5-way designs, in which there is one true woofer contributing only to bass output, and one mid/bass unit that operates all the way from the lowest bass up into the midrange, where it crosses over to the tweeter. This configuration allows the cabinet to stay slim while increasing the cone surface area available to deliver powerful bass. If a single dedicated bass driver were to be used instead, it would need a larger diameter in order to offer the same surface area as two smaller drivers. This in turn would require a wider front baffle and a chunkier overall appearance for the speaker. The narrow baffles and 2.5-way design allow the Diamond 12.3 and 12.4 to deliver “the extended high impact bass of bulky big-woofer models combined with the pinpoint imaging, broad soundstage, and transparent midrange of reference bookshelf designs,” according to Wharfedale.

Rap on the side of any Diamond model and hear the reassuring “thud.” Listen to music or a cinema soundtrack and hear the purity of sound that only comes with superior drivers positioned within an acoustically inert cabinet.

The weakest link in many affordable loudspeakers is the cabinets. Why? Cabinets cost money, and good cabinets tend to cost lots of money. In many speakers, across a wide range of price points, the cabinet is the single most expensive component in the design. But Fink and the folks at Wharfedale have used some clever engineering to reduce the audible characteristics of the cabinet’s sound without raising the price of the final product. The Diamond 12 Series cabinets are made from a carefully-designed multi-layered sandwich material — Fink’s team even measured the resonant properties of the glue between the layers in order to achieve the best possible results. This is the kind of attention to detail you might expect from Wilson Audio, but in a speaker with a 3-figure price tag, it’s rare. Fink’s research into cabinet bracing revealed that the “figure of eight” arrangement used inside many speaker cabinets simply transfers resonances from one cabinet wall to another. Instead, the Diamond 12 Series uses what Wharfedale calls “Intelligent Spot Bracing,” in which opposite walls are connected with a specific form of wood brace modeled by computer simulation to achieve optimal reduction of resonances. The rear-positioned tuned ports were designed using both computer simulations and extensive listening tests to determine the ideal design and positioning of the ports to match each speaker’s internal volume and the behavior of the mid/bass drivers.

Details of the Lineup

*For your convenience, we've included a link to Amazon.com to buy this product. As an Amazon Associate, Audioholics.com benefits from qualifying purchases.
Like This? Check out our other Tower Speaker Reviews!