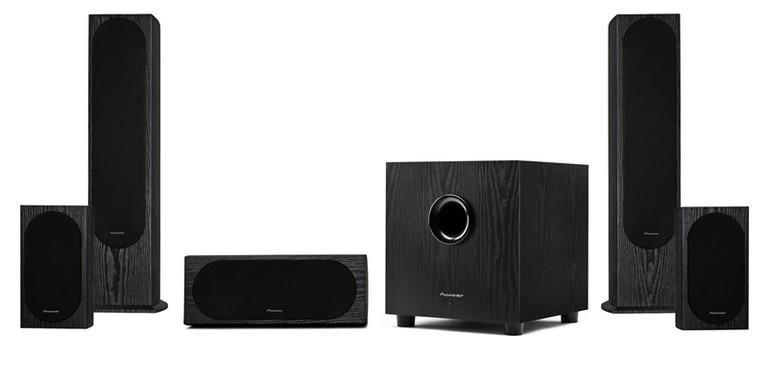 What would you say if we told you that a company historically known for their A/V electronics has redefined the loudspeaker market with their budget speaker line designed by industry veteran Andrew Jones?  Now take your amazement one step further when we tell you that for under $550 you get a pair of four driver 2 ½-way tower speakers (SP-FS52), a matching three driver MTM center channel (SP-C22) and pair of two-way bookshelf speakers (SP-BS22-LR) with an 8" 100-watt powered subwoofer (SW-8MK2).  While the model numbers of all of these products are a little ridiculous and difficult to remember, the performance and value certainly isn’t.  In fact the outside markings of the boxes these speakers come wrapped in more product specs, (most of which I was able to validate in my measurements), than you will find on most high end loudspeaker manufacturers websites or literature.  How is it possible that Pioneer can offer such a low cost speaker line packed with so much solid engineering and performance?  Well, you’re gonna have to read the review to find out.

When I saw all the talk about Andrew Jones’ Pioneer speakers on our forum, I must admit I was skeptical.  I didn’t even know who this chap was, let alone why there was such a fuss about their Kmart-priced speaker system.  All of that quickly changed for me last year at CEDIA when I not only got a chance to demo the speakers first hand but also meet the very fellow that designed them.  I threw a few tech questions at Mr. Jones and was greeted not only with good humor but very accurate and well-stated responses.  I also learned that when Andrew worked for KEF he was introduced to Dr. Floyd Toole.  Through the Audio Engineering Society (AES), Andrew met an incredibly rich diversity of respected researchers that promoted great discussion and research ideas, and many of those people became good friends. Floyd was one of those, and it was Floyd that invited him to come to the USA and work at Infinity.  This guy really knows his stuff and I’m impressed enough to often solicit his peer review for our loudspeaker tech articles.  What I was even more impressed with was the demo of this very Pioneer speaker system.  Let’s take a tour to see what’s in these little gems.

*For your convenience, we've included a link to Amazon.com to buy this product. As an Amazon Associate, Audioholics.com benefits from qualifying purchases.
Like This? Check out our other Tower Speaker Reviews!