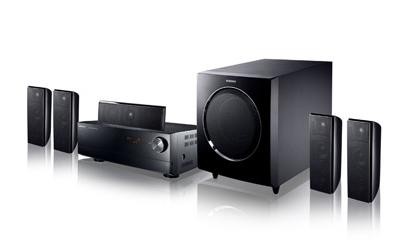 It's not every day that a system like the Samsung HT-AS720ST catches our eye...  and ear!  Although it isn't a cheap $99 package, or an overpriced $2000 cube speaker system, this $600 home theater is something to take a look at if you are just getting into surround sound.  The sleek and shiny appearance matches very well with today's glossy-edged flat panel displays, and Samsung has been very careful to have it match the look and feel of its Blu-ray players, as well.

The small front, center, and rear speakers seem to use higher quality components than the average HTiB (Home Theater in a Box).  The 8" subwoofer module is self-powered and won't tax the 7-channel receiver.  Yes, that's right, it only comes with 5 speakers, but has the connections and power for another 2 speakers.  That's good news, as it is perfect for adding two higher quality speakers to the front when you are ready.  The amp is already rated to drive the included 4-ohm speakers, so it should be an easy match to just about any 4-, 6-, or 8-ohm load..

We certainly wouldn't rate this product as "Pretty Cool" unless it had some other great features like 2 HDMI inputs and an HDMI output with 1080p upconversion for standard definition sources.  There isn't a DVD player included, but Samsung will be happy to get you into one of their new Blu-ray players for around the same price as this system. Of course, an HD DVD player from Toshiba will work just as well.  Even though this unit is designed for the new HDMI format, it maxes out at Dolby Digital EX and DTS ES formats. The newest Dolby TrueHD and DTS HD audio formats will not be decoded. But, if you happen to have a player that has 6 or 8 analogue outputs, there are discrete 7.1 multi-channel inputs on the rear of the system so you'll be ready for anything the future might hold.

Samsung included the newest ports, left out some options the average person would hardly ever use, then threw in a decent subwoofer and some better-than-average small speakers. Out came the AS720ST which is ready to play out of the box, but still has some room for expansion so your money will stretch farther.  Oh, and lest I forget, the universal Samsung remote control is pretty nice, with a logical layout and compatibility with a host of TVs and DVD players.  If $600 is your spending limit, then you should certainly go have a listen to this system at your local electronics store.

Read the Complete Thread
allargon posts on December 22, 2007 09:34
I want to walk in prejudiced and call this a competitor to the Onkyo HT-SR800. However, the Sammy has HDMI audio in for the same price. The Onkyo has two more speakers, but its HDMI is only pass-thru. Therefore, its closest competitors would be the Sony HT-SS2000 and HT-SF2000.

Are you all actually going to review it? I'm curious how it sounds w/ PCM audio from a Blu-Ray or HD-DVD player as well as SACD and DVD-Audio.
Post Reply