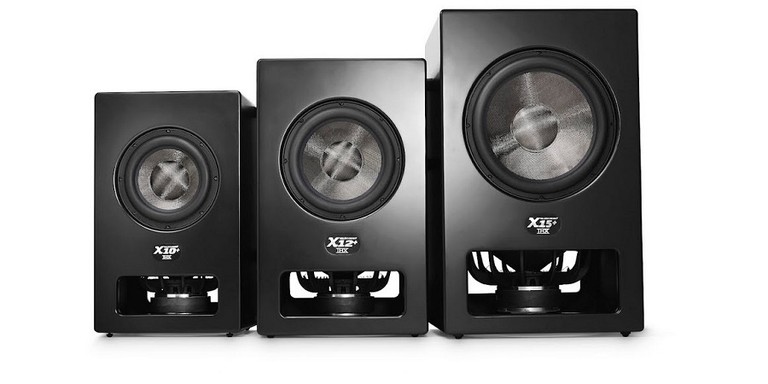 M&K Sound is launching a major new refresh of their celebrated X series called the X+. The original X series was launched in 2013, and although it had found a home in the recording studios of many major producers, technology had advanced considerably since its inception. The X+ series takes advantage of many of the new advances of modern subwoofer technology while still retaining the distinctive push-pull design of the original. The X+ also pushes the woofer sizes up a notch and deletes the dual-8” cone model while adding a dual-15”! The line-up now consists of the X10+ that has dual 10” woofers, the X12+ that has two 12”s, and the X15+ with its dual 15” cones.

M&K Sound was the first to release what would be considered a modern subwoofer back in 1977: a self-powered speaker that only dealt with deep bass frequencies. They have been pushing the envelope ever since then and have become the loudspeaker of choice for many of the top sound engineers. Perhaps it should come as no surprise to see them again at the forefront of subwoofer design, this time with a THX-certified Dominus subwoofer. Their new X+ subs are all THX-certified, and the flagship of the group, the X15+, manages a Dominus certification. M&K is the second loudspeaker manufacturer in history to release something that can attain Dominus certification, the first being the high-end brand Perlisten. The other two X+ models, the X10+ and X12+, achieve Select and Ultra certification respectively. For those who don’t know, THX-certified Select indicates that the subwoofer can reach THX Reference level performance in a 2,000 cubic foot room, whereas THX-certified ultra can do that in a 3,000 cubic foot room, and the aptly-named THX-certified Dominus can handle a tremendous 6,500 cubic foot room. It is no small feat to achieve these THX performance levels. THX certification isn’t just about loudness; a whole slew of other performance metrics must be met such as distortion quantities, linearity in frequency response, conformity to THX’s bass management requirements, compression behavior, and time-related functions like group delay. In fact, THX conducts over 400 tests on subwoofers to ensure that they meet certification standards. THX certification is more about fidelity within a larger THX system to ensure that the viewer has the exact same experience intended by the artist.

Among the design innovations M&K implemented in their new X+ series, the drivers get a major makeover with a longer linear excursion along with 30% more voice coil for higher power handling. The drivers need improved power-handling since the amplifiers have all been beefed up considerably with a large increase in power. This increase comes courtesy of some class-D ICE amps which provide some of the most efficient power delivery among modern amplifiers. The drivers have carbon-fiber cones for a rigid yet light transducer that also looks pretty slick. It uses some extended aluminum shorting rings that M&K calls the “Distortion Killer Shorting Rings.” That should go a long way into reducing even-order harmonic distortions. Further distortion-reducing measures include increased venting at the woofers to mitigate distortion due to air turbulence. One thing that has not changed from the original design is M&K’s distinctive push-pull driver mounting system. This is a sealed dual-driver configuration where one driver is mounted with the cone facing outward and the other with the cone facing inward. The drivers are then wired in the opposite phase of each other. So the cones of both drivers are moving inward and outward at the same time with respect to the cabinet, although they are moving inward and outward in opposite phase with respect to each other. The advantage of this is that the non-linear motion that only occurs in one way of travel is mitigated by the other driver since motion is restricted by the increase in air pressure by the inward motion of each cone. In other words, the cones are coupled together by the constant level of air pressure inside the sealed cavity, so the motion of one of the cones in one direction is always modulated by the other cone’s opposite direction of travel. If the cone has uneven excursion with respect to inward and outward oscillation (as all drivers do to some extent), that is balanced out by the interior air pressure change created by the opposite motion by the other driver. This reduces even-order harmonic distortions which are created by nonlinear motion in just one direction of the cone’s travel. Get the X15+ If You're A True Bassaholic?

All of this engineering should all add up to an extremely linear subwoofer, and the Dominus certification is evidence of that. Of course, such state-of-the-art subwoofer design isn’t going to be inexpensive; the X10+ clocks in at $4.5k, the X12+ is $5k, and the X15+ is priced at $6k. Given the differences in specs, it looks to us like the performance wouldn’t quite scale with the price, and we would guess that the X15+ would have performance much greater than the price difference ratio versus the X10+ and X12+. That is just speculation on our part, however, but if you ask us, the X15+ is the one to get unless your available space to too constricting for such a large sub.

As was mentioned, the prior M&K X subs ended up being used as subwoofers of choice for many of the major mixing and mastering studios. We expect the same will be true of the new X+ series, so if you want to experience the same sound as those who produced the content, having the same gear is a big step in direction. Hopefully, we will get a chance to hear these subwoofers for ourselves and put them through our battery of tests and measurements to see if the pros are onto something in their choice of subs.

That said I do think the Monolith THX subs will offer comparable perfomance for a lot less.

And also being ported, they are more efficient than those M & K. You would need a lot less power with the Monoliths as you don't have to EQ with them.
William Lemmerhirt posts on December 11, 2021 11:20

I’ve wanted to try the 590’s too. One thing that’s stopped me was that a person I know has heard both the 590 and S-312II that I use, and said they’re much more similar than different, and probably a coin toss for either would leave him happy. Of course that’s highly subjective, but I don’t like lateral moves.
And just like you, the HDI 3800 is very high on my list.
Mark E. Long posts on December 11, 2021 08:36

William Lemmerhirt, post: 1524015, member: 81215
Interesting. As i write this, I’m listening to simple man by Skynard in 7.3.4 Dolby Atmos . My mains are also by JBL as well as my surrounds and rear surrounds. It sounds so good in here I can’t explain.(volbeat just popped on and now Pink Floyd),
Point is… don’t know.
JBL has delivered some great speakers.

Mark E. Long, post: 1524007, member: 45154
There about 20 years old I use two pair in my rig . All 4 in mint condition and I’ve got spare drivers for them . They really enjoy good clean power and with good subs they really open up . Big and heavy very solid cabinets .

Interesting. As i write this, I’m listening to simple man by Skynard in 7.3.4 Dolby Atmos . My mains are also by JBL as well as my surrounds and rear surrounds. It sounds so good in here I can’t explain.(volbeat just popped on and now Pink Floyd),
Point is… don’t know.
JBL has delivered some great speakers.
Mark E. Long posts on December 11, 2021 00:09

There about 20 years old I use two pair in my rig . All 4 in mint condition and I’ve got spare drivers for them . They really enjoy good clean power and with good subs they really open up . Big and heavy very solid cabinets .
Post Reply