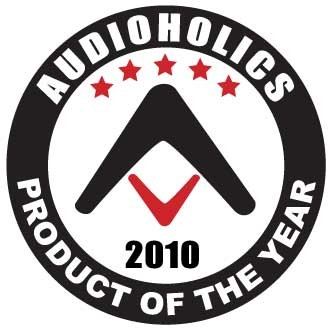 2010 Product of the Year Awards

Although 2010 was kind of a grim year economically for most of us, the A/V world belted out high value products improving on last year predecessors at little to no cost added. Instead, we saw some companies refocus their entire line of product with a more audio centric emphasis rather than cramming more zones or useless DSP enhancement features that most users won't care to use. Yamaha really paved the way as a shining example of this with their Aventage line of A/V receivers. Loudspeaker companies have also raised the bar by creating a more audiophile focus on their products.  Aperion Audio's new Verus line is a shining example of this. The display world was not exempt from the better successor models being released from various manufacturers such as Vizio, Toshiba, Samsung and LG.

With that in mind, we selected gear in each category that really stood out via our personal experiences, reviews or demos as well as the market trends set based on performance, features, and value.

Yamaha really spun us this year with their new Aventage line. Last year we kinda gave Yamaha a black eye in our editorial Trading Amplifier Quality for Features.  While still licking their wounds, they managed to pull a 360 on us, silently unveiling a completely audio-centric based A/V receiver line up called Aventage. All models boast fully discrete amplification for all channels with full power bandwidth power ratings, HDMI 1.4a & 3D support from their entry level model the RX-A700 ($649) to their flagship RX-A3000 ($1,899).  The RX-A3000 really deserves it flagship stature.  It has most if NOT all of the performance, and arguably better construction than their $700 more expensive RX-Z7 which we previously reviewed with high marks.  Best of all it has more up to date features such as more complete iPad/iTouch support, HQV Vida processing,  and full 3D support.   You will be hard pressed to find a more feature driven audio centric receiver at this price point.

We are getting tired of singing Emotiva's praises on their amplifiers.  Quite frankly its an embarrassment to the industry that they could offer such stunningly good performance for such a low asking price.  Their UPA-7 not only delivers more than specified power (125wpc x 7, 8-ohms; 185wpc x 7, 4-ohms) based on our bench tests, but it exhibits an exceedingly low noise and good channel to channel separation, ensuring its audio performance is great at all listening levels.  If you are looking to give your speaker system a shot of adrenaline, this is a great multi-channel amplifier on the cheap.  Sure, you could find a better seven channel amp, but we challenge you to do so at even double their asking price! We've been hoping, and suggesting that Aperion Audio unveil a speaker line with higher audiophile aspirations.  We knew they could do it, especially considering their existing lineup consists of quality crafted high performance products.  Their new Verus line takes it to the next level however.  Their specially designed tweeter is capable of playing down much lower than most conventional dome designs with exceptional power handling.  This allows the system to be crossed over at a lower frequency which improves off axis response by reducing beaming effects of the larger mid drivers as wavelengths become shorter than the cone diameter.  We currently have their entire new Verus 5.0 system in for review and are finding it to sound exceptionally good with ample output capability, stunningly great imaging and lack of compression when really cranking it up loud.  This is truly a great speaker line regardless of price, typically only found at brick and mortar stores but at internet direct pricing.  Fit and finish are excellent and they just scream high end.  The Verus Grand Towers are $1800/pair, Center is $700/ea and Surrounds are $600/pair. 
You can't be a bass head or audio forum regular without knowing the SVS name.  There is a reason for this.  They are masters at the cost/performance ratio for consumer subwoofers. They also don't worry about keeping their subwoofers small when they are going for extreme output. SVS built upon their well established PB12 model but with significant updates to the 12.5" woofer and 800 watt Sledge (best. amp name. ever.) amplifier replacing their older 500 watt Bash unit.  The little details such as the driver surround sewed to the cone and their proprietary free-breathing port flares, digital parametric EQ, and even variable pro-grade XLR inputs makes the PB12-Plus DSP a shining star in a galaxy of dim subwoofers in this price class. This sub has plenty of output as you can see in our pending subwoofer shootout where it squared off favorably against other similarly priced and even more expensive products. 
This year 3D is all the rage... so why did we pick a TV that isn't 3D-compatible as our Product of the Year? Simple. Nobody cares about 3D. I mean it... consumers are mildly fascinated, but with the fact that, as of this writing, there are only about a dozen true 3D Blu-ray titles, the studios aren't supporting the format to the extend hardware manufacturers are. With that said, Vizio has gone above and beyond in developing really thin LED backlit TVs that have great picture and advanced features. Their video processing is among the best, color quality and noise reduction is above par, and even their black levels are making inroads into what's possible with respect to non-plasma technology. Vizio's XVT473SV has local dimming, with 160 discrete zones, or blocks, of LEDs - making this an incredibly powerful TV. It's even got built-in 802.11n dual-band Wi-Fi and Bluetooth remote with full QWERTY keyboard. At 3" deep, it's not the thinnest TV on the market, but we think it's one of the best we've seen this year. 
Blu-ray players have come down in price considerably and now it seems the fight is on for features and market share. LG tackled the problem by filling its BD570 with all of the network features you could want, including built-in 802.11n wireless, Netflix, VUDU, Pandora, YouTube and more. But they went a few steps further, adding USB connectivity for removable drives. We were excited to see the BD570 contain all of the third party network services that it does, and especially pleased that it incorporates the new Netflix browser that actually lets you choose new video content and add it to your queue. Most systems simply allow you to access your Netflix queue but require you to log in via a PC to add more movies or TV shows. Overall, it's a nice interface and a decent player with a host of features most consumers will actually find useful (like relatively fast startup). For $179 it represents the "new" normal price for feature-rich, network-capable players.

jostenmeat, post: 784085
Don't get TOO offended. Looking at your respective sigs, I bet your system costs more than his does.

edit: well, hmm no sub for you yet, but still, haha.

I'm not any offended. I said “almost offended” lol

Yeah yeah I need a Sub.. I've got a Kicker L7 w/ 400w Bazooka amp but I don't think that'll work too well in the house.. lmao
3db posts on January 19, 2011 07:41
What surprises me about the speaker choice is that there was no full review done by Audioholics and yet it receives this award? How is this possible? The Yamaha and Emotiva both have had full lfledged reviews but the Aperions got a first look and yet it made it as the speaker choice of the year? Maybe they are a great speaker but from a pereceived optics point of view, it looks like adversting dollars paid for this award. I'm not saying that's the case, I'm saying the perception is certainly there. I think Audioholics staff should only select candidates that have had full reviews. That way the wrong perception can be avoided.
jostenmeat posts on January 18, 2011 20:32

fragzem, post: 784071
Patrick, I'm almost offended here. Thats a pretty poor generalization. I'm on a small budget, but you infer that I must be a moron as I'd “probably” not care enough to do research.

In fact, I believe people ON a lower budget tend to do MORE research so as to get the best bang for the buck. At least, that's the train that brought me here.

Don't get TOO offended. Looking at your respective sigs, I bet your system costs more than his does.

Patrick_Wolf, post: 776792
Most people who want good sound without paying much for it probably aren't going to care enough to come here or do research anyway. They'll just take the advice of their friendly Best Buy salesman who cares more about making a big sale than selling the best product.

Patrick, I'm almost offended here. Thats a pretty poor generalization. I'm on a small budget, but you infer that I must be a moron as I'd “probably” not care enough to do research.

In fact, I believe people ON a lower budget tend to do MORE research so as to get the best bang for the buck. At least, that's the train that brought me here.
Patrick_Wolf posts on December 26, 2010 21:01

shadyJ, post: 774205
I would use the same arguement against the Aperion speakers. I know they would be great speakers, but I think bigger things are happening in lower price brackets. The new Pioneer SP series is a far more relevant, and much more deserving of product of the year. Have you guys heard these things, they sound amazing for their price. They are the new bang for your buck leaders now that Infinity's Primus line refresh has raised their prices.

With the Pioneer speakers and Epik, Lava, and Rythmik subs, a lot more people can have terrific sounding home theaters than who were able to before. The same just isn't true for the Aperion and SVS products awarded here, at that price point there are a lot of other great choices as well.

It would be great if audioholics delved into the budget friendly, but this IS audioholics. Most people who want good sound without paying much for it probably aren't going to care enough to come here or do research anyway. They'll just take the advice of their friendly Best Buy salesman who cares more about making a big sale than selling the best product.

Some here consider $600 for a pair of bookshelves as budget, so depending on how the new Verus line stacks up they could be far more relevant than the Pioneer's SP line to the readers here. Besides that, having their floorstander and bookshelf variants costing the same price is very disconcerting. And their specs page is not working… can't say it inspires much confidence. And let's not forget the B2030P which is just as cheap and probably still better to boot.

I take weight vs. size as a more accurate scale of determining quality than other technical specs. The SP-BS41-LR being physically larger in size while being a little over 5 lbs lighter than the B2030P does not bode well. The Verus Bookshelf is only slightly larger, but it's cabinet is rounded (like the BS41) and only weighs 1.33 lbs less.

However I think it's fantastic of Pioneer to create a more mass-friendly priced product of such quality. Being a more mainstream brand they're able to reach a broader consumer base, aiding in bringing a higher level of sound quality into more homes. Which is just awesome.
Post Reply