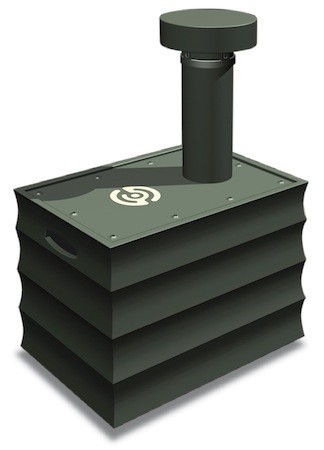 Occasionally a product will hit the market that just screams to be mocked. Not because it's a bad idea, not because it doesn't fill a niche, but just because of the form it takes. These are products that we want or even may need but we still chuckle when we first come across them. Who out there didn't look at the first iPod and think, "Boy, that's a weird looking thing?" I know I did. But can I live without one now? Maybe, but I don't want to.

While Speakercraft surely hasn't announced a product that everyone will want, like the iPod, they have got something in mind for the consummate outdoor entertainers. You know those people - the ones that spend thousands of dollars (and thousands of their own hours) tending, trimming, and upgrading their backyard. When you come over, you bring a coat because chances are you'll end up outside at some point and you don't want to risk getting cold. These people have the furniture, they have the kitchen, they've got the mini-fridge, and they have a boom-box on a little table in the corner. One of these things is not like the other...

We've reviewed and looked at quite a few outdoor speaker solutions over the years. Everything from planters to rocks, to plain ol' speakers. We've even come across a few wireless solutions. But subs are few and far between. The fact is that subs are heavy, they have a lot of work to do to really fill in an area - and, frankly, we think a lot of manufacturers are scared of them. Will people really want them? To do it right, you'd need a boulder-sub in your yard and not a lot of people are looking for a speaker that large. Hiding it can be difficult as well as the large size tends to lend itself to wall, ceiling, or floor placement - areas that aren't that abundant outdoors.

The awesomely named BoomTomb (we're shocked that one made it through committee) is an outdoor sub that you'll hear (and hopefully feel) more than you'll see. As the obviously rendered pic above shows, it looks a bit like an accordion with a smokestack. Basically, the bulk of the sub is meant to be buried in the ground and only the port (the smokestack) will be showing. This allows the sub to breathe and also increases the audible output significantly. The hood on top of the port is designed to keep out debris and water. We imagine it might have some sort of screen over it to keep out rodents and insects though we can only imagine what sort of super-ant would be created by breeding them in the high-pressure environment of the interior of a sub.

The enclosure is constructed out of a poly-resin which can be buried without the problems you'd expect from other, more traditional, materials. A poly-resin is a material which can be heated up to be molded into any shape but dries to a very strong, virtually unbreakable, enclosure. The shape they chose, while a bit on the odd side, is obviously designed to reduce any flexing of the enclosure. The external pressure of the soil should also help.

Inside, there is a 10" long-throw woofer mounted in the center of the box. This placement is pretty much the only way you could have a subterranean subwoofer. While in a traditional ported sub the sound will emanate from the driver into the room and be augmented by the port, in this case, the port is pretty much the sole provider of sound. Placement of the sub will be critical for sound quality but also to keep that port protected. The last thing you'll want is your lawnmower running it down or to be tripping over it all the time.

Rather than trying to incorporate the amp into the sub (which would be problematic at best), the mated 250 watt amp is designed to be placed with the rest of your outdoor audio gear (presumably inside) and the sub is powered through traditional speaker wires. This is a very cost effective solution for the end user as an amp would require not only an RCA cable from your receiver/processor, but also a power cord. Plus, the most likely thing to die in that situation would be the amp and the last place you'd want it is buried in the yard.

Of course, we couldn't help but smirk a little at the BoomTomb's design - it practically begs for the Dune/Thumper comparison. Plus, you have to wonder about the effect this will have on your neighbors. If it works too well, you're going to looking at some fairly unhappy people. If the ground shakes too much, at the very least, you could be creating some very confused dogs. Of course, we can't help but think back to the beginning of Godzilla where Matthew Broderick is driving the worms to the surface. Vibrations also do that. One could only imagine having your boss over for dinner, pumping up the outdoor sub to show off, and have thousands of worms showing up. Ahh, the hilarity.

If you have neighbors you hate or if you hate not getting the maximum amount of bass, the SpeakerCraft BoomTomb could be for you. Designed to be buried in your yard, the only evidence you'll see of it is a small tube protruding from a flowerbed. While pricing hasn't been announced yet (and SpeakerCraft has been known to have large signs around trade shows bragging about how much money you can make by selling their products), SpeakerCraft's rock shaped sub retails for just under a grand. It has (most likely) the same amp but a smaller driver and a more complicated enclosure. We'd expect similar pricing here. While this is a niche product for sure, the fact is that it will probably sell. While we like to snicker at the design, it is pretty innovative. We'd definitely love to get a chance to hear it... just not in our yard.