Yahoo! Music Goes to Hell: The Long Fall of DRM 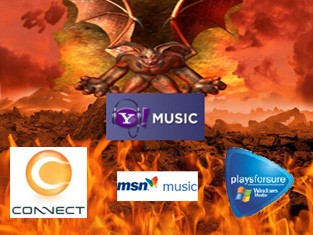 Yahoo! Music Store has announced that it’s shutting the doors on its DRM-laden music superstore. Somewhere Freddy Mercury is screaming “Another One Bites the Dust” at 128 kilobits per second. Despite short-term annoyances to burned customers, the joy to music fans is this era of Digital Rights Management is waning like a bad hangover.

It was only 2005 when we first heard the details of the PlaysForSure DRM scheme used by Yahoo! Music and others. Microsoft’s Media Player 10 DRM (PlaysForSure) was licensed to various music services (including Yahoo! Music) and to nearly any portable music player manufacturer.

The plan’s purpose was to topple iPod and iTunes absolute dominance in online music. In 2005 only 4 percent of music was purchased online, but it was a significant growth from the year before. Up to 70-percent of the total online music market belonged to Apple.

Yahoo! Music launched in 2005 hoping to carry its success in streaming music (Launchcast) over to a full fledged music store. Yahoo was already a big player with the most popular streaming radio service on the Internet and it was confident it could step up to rival iTunes.

The new DRM 10 scheme was spreading across hardware manufacturers like a thorny weed. All the big names in the burgeoning digital audio industry were on board - Samsung, Archos, Creative, Dell, iRiver… if it made a portable music player it wanted a piece of Microsoft’s plan to challenge iTunes.

The only notable holdout to Microsoft’s destined-to-fail DRM plan was Sony. The Japanese consumer electronics giant was big enough not to inherit Microsoft’s misstep. Sony was busy planning proprietary blunders of its own with a newly revamped Walkman brand. The company created a proprietary DRM-protected format called ATRAC3. The music files could be purchased from its own music store called Connect and could only be played in Sony digital audio players. Sony was banking that what the world needed was a late-to-market carbon copy of Apple’s business plan.

You’ll be excused for never having heard of Sony’s Connect. It was short lived and eventually Sony released a firmware upgrade that made its players compatible with PlaysForSure. Battered and beaten by its own DRM-missteps and humiliated by the RootKit scandal, Sony released instructions to its customers to convert their ATRAC3 files to WMA or MP3.

The system was clever, like cops psyching a confession out of a suspect, Microsoft and its partners would get you to buy music without really giving you anything.

All you have to do is pay a nominal fee of about $10-$15 per month and you could download all the 128-bit WMA files you like. They’re all encoded with Microsoft’s PlaysForSure DRM 10. This means they’ll only playback on the computer that created the online music account and a select portable device armed with PlaysForSure compatibility. Cancel your subscription or let it expire and your DRM-protected music library would vaporize. One might say your music collection would disappear like a 1977 hit Kansas song – Dust in the Wind. The plan simply hasn’t caught on.

Fast forward three years and iTunes growing market share is rampant. Today iTunes market share has swelled to 19 percent of the entire music industry, defeating even Wal-Mart and Best Buy. Apple has become such a juggernaut in the industry that the rise of digital downloads is synonymous with the rise of iTunes itself. All of its rivals in the online music industry combined barely dent its market. One could argue that Apple has been permitted to grow unchecked due to a complete lack of competent rivals.

The strongest message to wary consumers that PlaysForSure was in freefall was Microsoft Zune, released in Nov. 2006. The Redmond software giant deployed its own portable music player destined not to use its PlaysForSure plan. Many were left scratching their heads and a lot of misunderstanding ensued. Zune Marketplace and PlaysForSure are completely separate DRM ecosystems.

PlaysForSure and all its collective music services and devices were stalled before the Cyclops of Apple. Unable to claim a share of Apple’s market, Zune was Microsoft’s way of telling them: If you want something done right you have to do it yourself. We’re still waiting!

Change is in the air and DRM is quietly disappearing from the digital audio market. To many progressive consumers burned by the fall of PlaysForSure, DRM may have looked like a reality to which we’d all have to reluctantly agree. The market had other ideas.

Do we even have to say it again? Audioholics has been like a broken record or a sample on repeat (to digitize the analogy) on the topic of DRM over the years. Business is finally beginning to understand because Digital Rights Management has proved a plight for music sales.

The Future is DRM-Free

History will show that the meteoric rise of legally purchased digital music was hurt more by DRM than piracy.

Today iTunes has successfully adapted to the brave new future and sells DRM-free music. All four major music studios and a long list of indie labels have agreed to peddle music without DRM restrictions.

Sony’s ATRAC format has died and Connect closed its doors. MSN Music has sounded its death knell and its DRM keys are set to expire in 2011 nuking its customer’s music library.  Yahoo! Music Store is the latest casualty in the insanity of DRM. Its store and key servers will go offline on September 30, 2008.

May we have a moment of silence for legitimate customers who got burned in the DRM-10 scheme? Perhaps you bought an MP3 player with a month’s free subscription, only half-understanding the terms and agreed to continue playing along. Or maybe, despite the warnings from respected online sources (including…ahem, Audioholics) you believed you were pioneering the future of digital music.

The long-surreal nightmare of DRM-music is drawing to a close. Now if only the movie industry would follow suit.

Read the Complete Thread
Hi Ho posts on July 28, 2008 20:30
This is one reason I still buy CDs; the other being the fact that I have no interest in paying for compressed versions of the real thing.

I actually had a Napster subscription for a short while (same DRM as Yahoo) and downloading an unlimited number of songs wa cool but they were only 128k MP3. I have since deleted all of those songs and purchased CDs of all the music I got from my Napster subscription.
Wayde Robson posts on July 28, 2008 18:54
Thanks for the positives on this article.

DRM and its inherent trouncing on private property may seem like a far flung philosophical idea but I think it's the root of why it's considered so evil and shouldn't be ignored.

I know a lot of people probably don't care. It goes back to the mindset that if you're not stealing you don't mind being searched.

Those people would join Americans who don't mind sacrificing a few civil liberties for the sake of security.

The FCC is about to rule against Comcast for bandwidth throttling. Some are saying that since they have no use for bit-torrents, P2P or any of the other questionable sources of content - throttling isn't their problem.

“I don't even care for tea! So, why should I care about taxation without representation?”

If you have (what the late Carl Sagan called) a well-honed BS-detector you saw the problems with PlaysForSure and FairPlay from the very start.

I swear, some of these corporations should employ a first-year philosophy student to test some of their policies.
smurphy522 posts on July 28, 2008 10:31
Agreed

hessel, post: 438449
Take the Darwinist approach; adapt and you will survive. So instead of resisting change and become extinct you want to embrace change. People are going to share music, so give them something to share!

Most undoubtably so……………..In the case of DRM and online (in general) if you are not on the bandwagon you are most likely going to regret it. sometimes that is unfortunate as the popular “x” is not always the best.

Like the article mentioned History will show that DRM had more to do with the slow adoption of online music than any other single source.
jamie2112 posts on July 27, 2008 12:53
Thanks that was a good bit of info. I am glad to hear that myself…..
hessel posts on July 27, 2008 08:32
Take the Darwinist approach; adapt and you will survive. So instead of resisting change and become extinct you want to embrace change. People are going to share music, so give them something to share!