Why DRM Is Bad and Killing Online Music 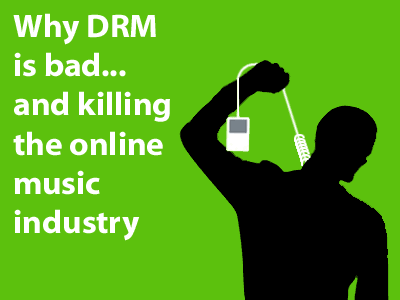 Why DRM is killing the online music industry

You've heard us (and everyone else for that matter) harp on how bad DRM is for consumers. What many readers don't understand is why. Microsoft gave us a perfect example yesterday as they issued an email explaining that users of its now-defunct MSN Music service will need to make any and all authorizations or deauthorizations before August 31. This is just another nail in a slowly descending coffin.

Um. That sucks, considering the average lifespan of a PC is about 3 years. I know that I have some CDs that are well over 15 years old. I can imagine my anger if the RIAA suddenly told me that I had to "pick my final CD player" because they were about to "shut down the servers which allow me to move my CD from one player to another."

This is very similar to what happened with Google Video, which offered videos for purchase and rental. On August 10, 2007 users who made online DRM-laden purchases from the site received this interesting email:

As a valued Google user, we're contacting you with some important information about the videos you've purchased or rented from Google Video. In an effort to improve all Google services, we will no longer offer the ability to buy or rent videos for download from Google Video, ending the DTO/DTR (download-to-own/rent) program. This change will be effective August 15, 2007.

To fully account for the video purchases you made before July 18, 2007, we are providing you with a Google Checkout bonus for $5.00. Your bonus expires in 60 days, and you can use it at the stores listed here: http://www.google.com/checkout/signupwelcome.html. The minimum purchase amount must be equal to or greater than your bonus amount, before shipping and tax.

After August 15, 2007, you will no longer be able to view your purchased or rented videos.

If you have further questions or requests, please do not hesitate to contact us. Thank you for your continued support.

Google shut off already-purchased movies. Just like that. While Google at least offered some token "Google Checkout" money, it was a compensation of convenience since Google was currently running deals all over the place to encourage consumers to use the new payment system in the few areas it was offered.

DRM is dangerous because it effectively turns "ownership" into a sort of "permissive lease program." For anyone who thinks they actually own a piece of DRM-locked music or video, all it takes is to look at the following examples to see that you, in fact, do not:

What makes this so difficult to comprehend is that, as in life, rules are made for rule-breakers. You don't have to tell law-abiding citizens that it's illegal to steal from the grocery store - they already know that.

So why does Hollywood lace its legal movies with mandatory non-skippable, "anti-piracy" introductions and create DRM systems that seem to only negatively affect consumers who are legally using their software? In the COPP case above, Microsoft (by route of Netflix) is prompting legal users to revoke all DRM licenses on a PC when they change hardware or use a system that is simply "too high-def" for their tastes. When they do this, illegal files aren't disabled, but your legal files are.

When you do a DRM reset, it’s not your pirated files that get revoked, it’s the ones that you already paid for that are at risk. I’m not allowed to watch low res Netflix files, even though I have the capability to download high def torrents? How does this even make sense? It’s as if the studios want their digital strategies to fail.

If that's not bad enough - you don't even have to be involved to lose access to your music. At any time, the DRM licensor can change or even revoke your ability to view downloaded content at any time. The examples above not only show you that this is possible - it's actually happening.

As you can imagine, the forums and discussion boards are alive with much banter about DRM and how it is affecting consumers and hampering an already-struggling industry. My favorite user comment, loved for its simplicity in outlining the true issue at hand, came from a reader at BetaNews:

Yes, that pretty much sums it up.

If DRM doesn't go away - and fast - eventually even casual users will begin to find out that the illegal files are far more flexible and enjoyable than the legal files being made available to them.

The worst of it is that a year or so ago I was looking into legal downloads and I spent 30 minutes on the Itunes site to *find out what I could before I make a purchase decision* and there is no mention whatsoever about DRM. I wanted to know if I could make copies and play them in my car… Ya sure!!

The problem is also with software. At my company we replace PCs every 3 years. Well I have to rebuy the personal software I purchased.. I contacted Creative about re-issuing it the license on a new PC and didnt even get a response.
Similar thing happened a few years ago. I got a refurbished PC from my local big box store. well a week after the warranty expired the motherboard blew. I replaced the mother board and the case, reused the CPU, memore, drives etc. But of course my emergency backup CDs that I carefully made when I got the PC would not load on the new motherboard so I ended up using a bootleg copy of Windows. I feel I am completely justified as I legitimatly owned a copy of windows.

I still believe in buying hardcopy. I have colected books for a few decades and my library is pretty big… For any one to borrow. I dont have to worry about licenses, DRM, copying to new formats, making sure my reader works on any pc etc etc.

The problem exists for HDDVD as well. I hesitate to start buying HD as I cannot make copies to play in the car. I have 3 dvd players in the house, one in the car, plus a mp3/mp4 sony walkman. If I buy HD dvds I am stuck to just one player!! The induestry just doesnt get it!!!
BBF posts on April 23, 2008 22:00
Great article. It's not just online music, its online MEDIA (music, movies, books, games)

Maybe it's time that a law was passed that required all companies that sold DRM'd material to store the ownership records and setup authentication servers at a third party license distributor that guaranteed access to those licenses up to X years after the company that sold you the DRM'd material went belly up. I know, highly improbable, but one can only hope.

That's why I don't buy electronic DRM'd music/movies/games/books anymore. I will rent them, but no longer buy them because they're never really mine. When B&N closed down their MS Reader bookstore, and left me with a few encrypted e-books that I had to backup manually and had to keep on begging Microsoft for more MSReader licenses because I change PPC phones and PC's quite often, I said never again. Download a game from steam and have it not work when the steam authentication servers are down? Nope, I ain't gonna do it.

Honestly, the way things are going now, Apple could suddenly close down iTunes.com today and open up uMoronsWeScrewedULemmingsMusicStore.com tomorrow and require iTunes customers to repurchase all their DRM'd music and break no laws. :-< They *did* allow you to back up all your AAC files onto CD's in CD-AUDIO form, so it's your fault if you didn't do it and you broke your IPOD.

fredk posts on April 23, 2008 19:53
Interesting article. I had never thought about the implications of downloading and DRM.

Seems the industry has much better aim than I gave it credit for when it comes to shooting itself in the foot.

Punishing early adopters does not seem to me to be the best strategy for market development. I can't imagine those who got burned are going around telling all their buddies how great these new services are.

Could you imagine the uproar and ensuing class action suits if the dvds purchased in stores suddenly stopped working because some license was revoked?

Fred
jinjuku posts on April 23, 2008 12:37
People will keep buying DRM laden material. It's a mass effect thing. The government, who is supposed to serve her people, believe that free markets adjust for the benefit of the consumer vs benefit of the shareholder.

You want this crap to go away, get rid of the DMCA.
Post Reply