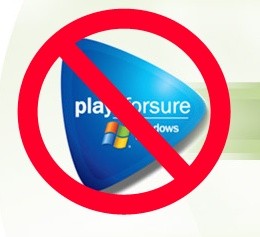 We can't be Sure any longer!

Microsoft is constantly changing focus in all their markets, but for Digital Media, they just can't seem to stay focused. The "PlaysForSure" certification has been around for a couple of years, and seemed like it would be a pretty good thing for portable music enthusiasts. Yes, it would be nice to know if you could buy a digital media device and actually KNOW FOR SURE that it will play your media files, even if they have DRM restrictions intact. Of course, Microsoft decided to release their own device, the Zune, in November of 2006, and it wasn't PlaysForSure compatible. A Microsoft Mystery!! Make a "standard" then make a device that isn't compatible with this "standard". Nah, Microsoft would never introduce something they didn't intend to follow through with... Isn't that right Microsoft Bob?

Microsoft has now upgraded their certification to be more compliant with their latest marketing scheme: "Certified for Windows Vista". Of course, all of the PlaysForSure devices should still work fine, but it's obvious that we are being pushed forcefully into the Vista era. You know, the same Vista that has a more complex DRM scheme, the Vista that requires beefier hardware to run at the same speed, the Vista that you may not be upgrading to because your copy of Windows XP seems to be working just fine for now!

I am not trying to beat on Vista, as I have been using it reliably for over a year now, but when a company as powerful as Microsoft constantly changes certifications, requirements, and logos, it only causes confusion for the average consumer. Wouldn't it be nice to download some quality music at a fair price, have no DRM attached to it, and be able to "Play It Anywhere" instead? Slogans and certifications aside, Microsoft and the other big fruits wouldn't have consumer confusion and hardware compatibility issues if they just chucked their DRM schemes out the windows!  (pun intended...)

Be sure to ask Microsoft what they can do for you when your PlaysForSure device isn't compatible with that new Vista computer you just bought!!

Read the Complete Thread
bigbangtheory posts on December 18, 2007 11:20
It's probably best that Microsoft quit while they're behind…

I have a Toshiba Gigabeat S60, which is an mp3 player branded with the “plays for sure” moniker.

After 6 months of fiddling with this device and windows media player - regardless of updates - I can confidently say that the moniker should be changed to “plays for sure, as long as God's finger is taken off the smite button.”
jonnythan posts on December 17, 2007 14:10
Apparently they will be rebranding it as Compatible With Windows Vista, despite the fact that it will work fine on XP.

They will also pull both of their main DRM schemes for media into one brand, despite the fact that they're totally incompatible.