Will Microsoft's Zune Work For You? 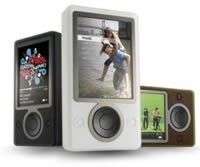 Love 'em or hate 'em, Microsoft Corporation knows how to make an entrance into a new consumer market space and its foray into portable digital media devices is no exception. Zune isn't just Microsoft's splash into media hardware. Apple's iTunes demonstrated hardware is only the beginning. The Zune device is just a gateway into a complete package of Microsoft branded entertainment. Buying the device is like being handed a flower at an airport from a nice man in robes and a shaved head, the flower is just the beginning of a tide of obligation to the cult of Zune.

What you get from Zune

Wi-Fi: Much is made of Zune's wireless capabilities but the truth is it's probably going to be a disappointment to most. There is no Wi-Fi Internet access . You won't be able to download music directly from the Zune Marketplace to your media player, nor sync Zune to your computer. In the opinion of some wireless is practically worthless. The only wireless connection you'll perform with Zune is a local connection to other Zune devices to perform what's called a 3x3 file sharing, more about that later.

It's a bit of a surprise the ability to download from Zune Marketplace isn't on the device. The feature is what made the MusicGremlin such a cool little player MusicGremlin gives you the ability to browse their music service and download directly to the player while it's connected to the Internet via any wi-fi hotspot. It's still a unique feature that has yet to be emulated by competitors.

PlaysForSure: Microsoft Media Player's DRM 10 was licensed out to third party manufacturers (like everyone who makes MP3 players that's not Apple) with the understanding they would not be competing with Microsoft . The latest words from Microsoft VP J. Allard is Zune won't be PlaysForSure compatible. This means if you've been a subscriber to online music services like Napster, Yahoo, Movielink, Rhapsody or Cinemanow your Zune device won't play it back. It keeps the Microsoft consistent with previous promises to the likes of Creative, Sony and iRiver but it'll frustrate subscribers hungry for Microsoft's new MP3 player.

Zune's Viral DRM: Since an explanation about of Zune's 3x3 wireless file sharing system came out it's been rumored that Zune will add a DRM to un-DRMed media added to the device. This rumor is simply wrong and a testament to Microsoft's relative secrecy about the capabilities of Zune. The rumor's unknowing perpetrator was probably the Zune Insider Blog .

When your Zune wirelessly locates another Zune you can share files. Any media files you send (except images), whether DRMed or not, are subject to the 3x3 rule meaning it's only good for three plays or three days then it can no longer be played by the device. Image files are not subject to the restriction.

So, will Zune work for you? Hopefully now you have a better handle on whether or not it's going to be the right player for you.

Special Thanks to Gizmo Café Blog