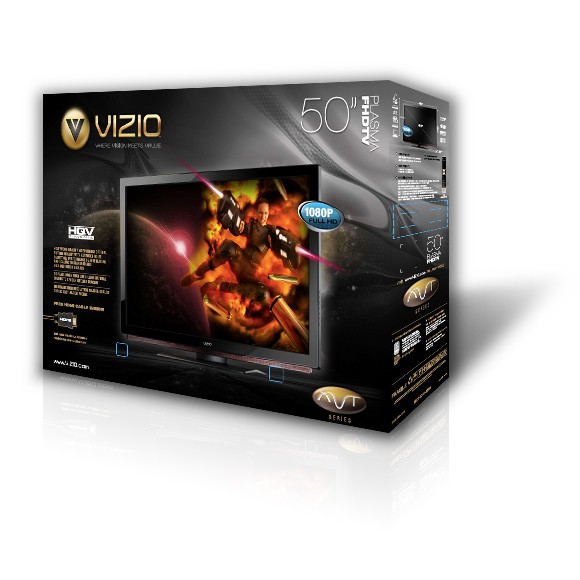 This week Pioneer wasn't the only company indicating it will retreat from the plasma TV industry, Vizio has now made it official that they will no longer produce sets with the technology. Vizio is only 5 years old, but as a company they gained historically fast market share through big box retailer deals and aggressive pricing tactics that left them as the low-price leader in many markets.

Moving forward, they will concentrate on marketing and selling only LCD TVs. While their website still indicates the availability of plasmas, company co-founder Laynie Newsome pointed on to reporters that the company is almost out of inventory. In addition, Vizio didn't announce any more plasma TVs at January's Consumer Electronics Show (CES) in Vegas.

Aside form smaller specialty companies, the withdrawal of Pioneer and Vizio leaves just LG, Panasonic and Samsung holding the plasma market steady. Newsome cited several reasons for the plasma decision, some of which saddened us. He indicated that plasma sets simply don’t show as well in big box stores, which are typically lit by bright fluorescent and halogen lights, giving consumers the impression that LCD TVs have a more vivid picture. I've experienced this first-hand and can attest to the fact that consumers, not manufacturers, are driving the prevalence of torch mode being the preferred marketing method for new displays.

Vizio isn't stupid, LCD indeed seems to be selling more aggressively these days and in this economy there is little time for the company to patiently discover ways to educate consumers about the advantages of plasma technology. At least not when they can just as easily sell that consumer a bright LCD panel.

The news isn't all bad, we saw a sub-$2000 55-inch LED-backlit LCD TV (the VF551XVT) at CES this year that is slated to be available in July. LED backlit TVs, when done correctly, can match plasma pixel-for-pixel in terms of black level capability. The new set will also have the (potentially dreaded) 240Hz frequency and a stated 1,000,000:1 contrast ratio. Fortunately it also comes with a scanning backlight - a technology used to reduce motion blur without the largely inefficient frequency boosting frame interpolation we have seen to-date.

Vizio seems to be making some good (business) decisions, though we're personal fans of plasma technology. We want to see all of the companies thrive and if this is what it takes then we'll applaud companies that give thought to market directions and trends and act accordingly. We'll also see a $199 Blu-ray player from Vizio around May of this year that includes BD Live (Profile 2.0). That seems like a step in the right direction for a company that craves brand recognition and a position as a low cost, high-value leader.

Gusgt, post: 523684
Is the plasma versus LCD popularity similar to the Betamax versus VHS battle of yesteryear?

The recent battle was HD-DVD vs. Blu-Ray. This time around the superior format prevailed. It looks like the superior flat panel technology for televisions is struggling though. Hopefully it will hang in there long enough for the next major technologies to replace both LCD and plasma.
Gusgt posts on February 14, 2009 12:05
Is the plasma versus LCD popularity similar to the Betamax versus VHS battle of yesteryear?
Hi Ho posts on February 13, 2009 12:58

Remember CRT's, when's the last time you saw a Mistubishi 40" or a Panasonic Super Flat or even an Sony XBR Trinitron on a shelf? Yeah, that's what I thought.

Not long ago I'm afraid. Think two days ago when I had to move a 36“ Panasonic. I've moved my fair share of large CRTs including the Mits and Sony 40” tubes and I am not so fond of them for that reason.

I don't know the ins and outs of plasma and LCD production but judging by the retail prices it appears that plasma still has a price advantage at the 42“ size. A good 42” Panasonic 1080p plasma can be had for under $900 if you shop around and still under $1,000 at most places. That is cheaper than any name brand LCD of that size that I have seen.
smurphy522 posts on February 13, 2009 07:48

Hi Ho, post: 523192
I disagree, smurphy522. I don't think Panasonic will be pulling out of the plasma market any time soon. They have far too much invested in the technology and (rightly so, IMO) very little invested in LCD. Plasma panels are also cheaper to produce than LCD panels in larger sizes.

If it does happen then I will be screwed. I have yet to be impressed with an LCD TV. Case in point, the Sony KDL-55XBR8 vs Panasonic TH-50PZ85u side by side and calibrated in a light controlled room. $7,500 vs $1,500. These are two sets that aren't even close to the same price bracket. In my opinion the Panasonic looked better. To be completely honest, the Sony, even with its triluminous LED backlighting, had a greenish hue to blacks that made the picture look washed out. Get a little bit off axis and it's game over for the Sony. No contest, plasma wins. Did the Sony look better than any LCD I've seen to date? Yes. Would I buy one at that price premium? Definetely not. Would I buy one for the same price as the Panasonic? Also, no. All my opinion of course but the point is, LCD has inherent flaws that I don't believe will ever be completely overcome. If plasma goes away and I need a new TV I'll be waiting for OLED.

Well I guess I expected a comparison between Plasma/LCD (please note I was not taking sides and am also distraught about the loss of a superior technology). Fact is that LCD panels of sizes less than 50“ are cheaper today to make than their Plasma counterparts. 50” and less is the higher margin and most popular category for HDTV sets. What it comes down to are the masses speaking and buying more LCD panels (at cheaper prices and yes at many times of lesser quality as well). Even then, for most situations in a TV veiwing area there is genrally little concern or attention put towards light control. If not calibrated and put into a brightly lit room I tend to say that LCD wins. Not always but more often than not the LCD will look better out of the box and in a brighly lit room.

I would suspect that if it were not for the economy Vizio and Pioneer (to name the recently fallen/announced ones) would be making Plasma panels still. Note that prior to the economy downfall, or at least prior to our Govt. acknowledging it, Pioneer stated they would start to not focus as much R&D on Plasma technology.

I was aware that Vizio did not make their plasma line (Duh…). Without good entry level offerings like Vizio there tends to be an even a longer time of development for our technologies; which we love. I always get a chuckle out of somebody bashing a company especially when they don't have or never did have the product. OK, if you got screwed by a company then so be it. But just chiming in to say Brand X sells rebranded doo-doo; I digress.

Think about…it if companies like Vizio weren't around, competition wouln'd be as fierce and the average consumer would have to put off that HD upgrade for longer and thus we, video/audioholics would not get as good a price on the middle and top end products. Hey then we might have to wait to upgrade as well! That's how much of this industry works.

I anticipate that Panasonic will make an anouncement in the near future stating the end of their Plasma development (not the sales mind you) just the actual engineering R&D. Eventually LCD will be replaced by something too, that's just how this technology works. Remember CRT's, when's the last time you saw a Mistubishi 40" or a Panasonic Super Flat or even an Sony XBR Trinitron on a shelf? Yeah, that's what I thought.

admin, post: 522806
This week Pioneer wasn't the only company indicating it will retreat from the plasma TV industry, Vizio has now made it official that they will no longer produce sets with the technology. Vizio is only 5 years old, but as a company they gained historically fast market share through big box retailer deals and aggressive pricing tactics that left them as the low-price leader in many markets.

Vizio uses B-grade Panasonic screens in their plasmas and sells them for the price of a real Panasonic. One can only assume that Vizio/AmTran cuts every corner in the electronics & parts, yet they can't even be competitive in price. Big shocker they don't want to try to compete anymore!

Besides, Vizio/AmTran is the absolute perfect brand for people with the LCD mentality anyway.
Post Reply