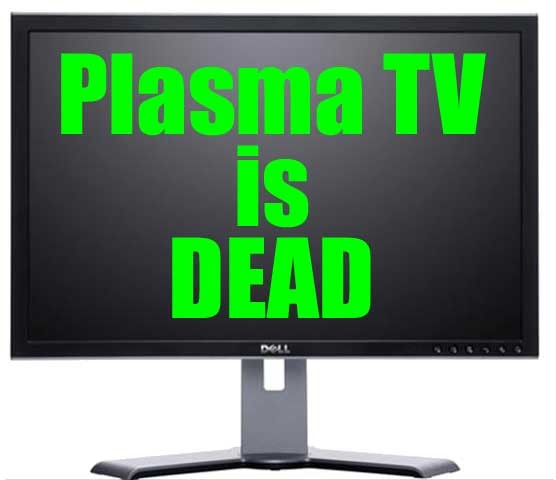 As we predicted several years ago, plasma technology is on its way out. Putting one of the nails in the lengthy coffin is Pioneer Corp, who is stopping ALL production of plasma display panels. Last week we reported that they had decided to stop all 42-inch panel production, however that has now been expanded to its entire plasma line. This comes via an industry source briefed on the plan and quoted by Reuters in an article released today. Rather than panic, Pioneer shares immediately jumped to a four-month high following the report - up 11.2 percent.

You heard it here first: Plasma TV is dead.

Pioneer is the world's fifth-largest plasma TV manufacturer and has constantly struggled for relevance against the larger Panasonic brand (Matsushita). Now, Pioneer will buy its panels from the competing brand and it will begin picking up LCD panels from... you guessed it - Sharp. This makes three major manufacturers who are backing Sharp panel production in the coming year (inclusive of both Toshiba and Sony Electronics). Our guess is that Sharp is going to be the first to market with the new line of super-thin LCD panels that fans such as myself have been dreaming about for some time.

Investors have long known that Pioneer was bleeding red ink over its plasma division having several years ago decided not to compete in the low-price market. "This is an excellent development," said Mitsushige Akino, chief fund manager at Ichiyoshi Investment Management. "Pioneer could have chosen another way and stepped up its plasma investment despite the fact that the business is bleeding red ink, but it's a wise step to decide against that... a quicker decision would have been even better," he said.

This is no easy decision for the Japan-based manufacturer. Pioneer has spent nearly $1 billion (yes, with a 'b') on four plasma TV manufacturing plants and two additional plants it purchased from NEC.

According to the report, a Pioneer spokesman said the company would unveil its display business strategy when it announces company-wide business plans on Friday.

The only thing surprising about this announcement is its timing. Pioneer just last year launched its premier "Project Kuro" line which promised total black levels and was designed to give consumers a no-holds-barred choice for high-end plasma displays. Pioneer had repeatedly stated that the Kuro brand was gaining speed and 2008 would show that Pioneer had captured the high-end market. The problem is that Pioneer, while predicting several hundreds of thousands of plasma TV sales, was up against rival Panasonic who had a planned sales volume of more than 5 million units.

For those concerned, this doesn't mean that Pioneer will exit the plasma business. It simply means that they are, in the interim at least, looking to leave the plasma panel manufacturing business, opting instead to purchase their panels from a company like Matsushita (Panasonic).

As to what this means for plasma as a technology, we believe that, as predicted, this is the beginning of the end. It's longevity depends on a few factors now:

So there you have it. Plasma has begun its exit from the market as consolidation forces one of the largest proponents of the technology finally exits the manufacturing business and takes on LCD. We're sad to see it go, but it appeared to us at this year's CES that ultra-thin LCDs are going to hit the market much sooner than ultra-thin plasmas. When that happens there is going to be an incredible surge in popularity for the <1-inch thin displays that will push plasma technology further away. The same effect has happened to rear projection television, with manufacturers leaving those markets and technology in droves. Just this year, Sony decided to eschew all screen technologies save LCD and OLED - and it had a large stake in its LCoS-based SXRD line.

The future looks bright. We can't wait to see what happens next.

A plasma TV is simply a various way of diplaying a TV picture. There are numerous types of picture display mechanisms on the market today such as plasma, LCD and LED. Each has a different technology behind providing the actual picture to the screen. This allows for slightly different picture shows, as a natural by-product of a different display structure.

This short article will focus on what specifically plasma TV is, how it works and what the outcomes are.

First of we will look at how exactly plasma tv work, in producing a picture that is. Plasma television relies on tiny gas cells to produce its visualize. These types of gas cells are basically sandwiched between two panes of cup. Each individual gas cell reacts to act like a little fluorescent tube. This is done by the emission of ultraviolet light that is then struck through red, green and blue patches or spots on the monitor. The resulting effect is these spots glow, to build up the entire picture that the viewer sees.
plasmatvols posts on April 17, 2012 22:39
Plasma Tv Reviews

A plasma TV is simply a different way of diplaying a TV picture. There are several types of picture display mechanisms on the market today including plasma, LCD and LED. Each has a different technology behind delivering the actual picture to the screen. This allows for slightly different picture displays, as a natural by-product of a different display format.

This article will focus on what specifically plasma TV is, how it works and what the results are.

First of we will look at how exactly plasma television work, in producing a picture that is. Plasma television relies on tiny gas cells to produce its picture. These gas cells are basically sandwiched between two panes of glass. Each individual gas cell reacts to act like a small fluorescent tube. This is done by the emission of ultraviolet light which is then struck through red, green and blue patches or spots on the screen. The resulting effect is that these spots glow, to build up the overall picture that the viewer sees.
Seth=L posts on May 26, 2010 09:35

It appears that's exactly what they've done. Since they announced this 2 years ago and haven't had a presense in the plasma business since 2008 it seems fairly obvious they are out.
flovour posts on May 26, 2010 08:47
Pioneer announced it's going to exit the plasma display panel market,his doesn't mean that Pioneer will exit the plasma business
tsteves posts on May 20, 2010 21:32
yada, yada yada. Still, a large percentage of the “smart” consumers are still opting for Plasma. If I was buying today it would be a plasma. Not that I'm implying I am in any way smart!
Post Reply