Doctors: Steve Jobs Cancer May Be Back 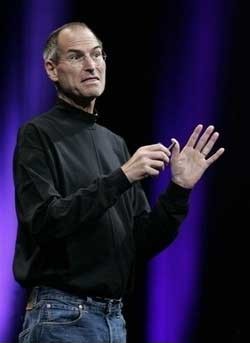 Steve to take leave of absence

According to a Reuters report issued this week, pancreatic cancer "experts" said that "they are puzzled by what is ailing Apple Inc Chief Executive Steve Jobs, because it is not clear how serious his health problems are or how directly they relate to his bout with cancer."

It was just last week that Steve Jobs announced that he had a simple and treatable "hormonal imbalance" that had been causing his gauntness. On Wednesday that story changed and Jobs cryptically announced that his physical issue was "more complex" than originally thought. He is now set to take a six month medical leave - presumably to address these issues and get back on track.

Of course that's not a sufficient amount of information - at least not for Apple shareholders or the press in general, so investigations and pontifications (laced with a healthy dose of "expert" opinions is underway. Reuters had doctors - doctors who have not been involved directly with any of Jobs' issues - lending opinions on what might be going on. Opinions vary, but can be summarized  by the following possibilities:

FOr those who don't know the history, Steve Jobs was treated for pancreatic cancer (a rare form of it, actually) in 2004. We're not really sure if it was benign (harmless) or malignant (dangerous and growing), but in either case these types of tumors tend to grow slowly and aren't as prone to spreading rapidly like many other forms of the disease.

According to the American Cancer Society, over 37,000 Americans a year get some form of pancreatic cancer, but few get the kind Jobs had. While his kind is less aggressive and can be removed via surgery, it's also known to recur in about half of all cases.

To defend Steve's initial reaction to the speculation, the pancreatic cancer he had in particular can cause the hormones to go into overdrive which could release an overabundance of insulin into the bloodstream, mess up the digestive system and cause drastic weight loss.

To be honest, most of the speculation simply comes from a combination of Jobs' importance to Apple and the lack of specific information coming from Cupertino at this point. We're hoping a speedy recovery for Jobs - regardless of what he has. Perhaps when he comes back he can come up with some helpful ideas to aid in turning around the economy. We have some suggestions:

Now that Steve will have some time without the concerns of Apple Computer looming overhead we hope he gets some quality "garage time" and comes back swinging with at least one or two of these excellent products. Here's to a speedy recovery!

Read the Complete Thread
yettitheman posts on January 21, 2009 01:58
An Apple a day keeps the doctor away?


Seriously though, I understand why he had to step away like that.
Cancer sucks.
Djizasse posts on January 19, 2009 19:44

jamie2112, post: 511347
I know there are quite a few people out there who don't like Jobs and Apple. I hope He gets his illness under control whatever it may be. I have been a Mac user for 5 years now and love my computer. Best of luck to Jobs and I hope he gets better……

I'm not an apple fan, but I like Jobs. Hope he gets better.
jamie2112 posts on January 19, 2009 10:44
I know there are quite a few people out there who don't like Jobs and Apple. I hope He gets his illness under control whatever it may be. I have been a Mac user for 5 years now and love my computer. Best of luck to Jobs and I hope he gets better……
MapleSyrup posts on January 19, 2009 10:41
That's really unfortunate. Thoughts and prayers to Steve and family.
Post Reply