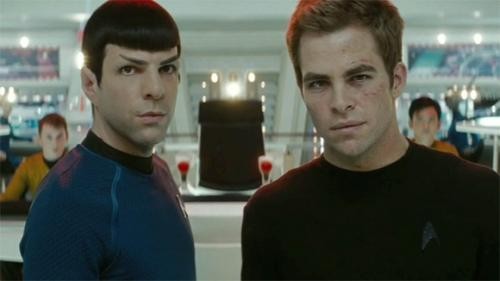 We got the skinny on the Blu-ray and DVD details for the new JJ Abrams Star Trek movie release. Thanksfully, the Star Trek Blu-ray release seems to maximize the audio potential with Dolby TrueHD surround sound. We're also glad to see an abundance of extras - so much so, in fact that even the Blu-ray is coming out as a 3-disc set (the DVD will be available as both a dual disc and single disc set). Both formats are going to be released on November 17, 2009 and the disc breakdown is below:

To Boldly Go — Taking on the world’s most beloved science fiction franchise was no small mission. Director J.J. Abrams, writers Roberto Orci and Alex Kurtzman, producer Damon Lindelof, and executive producer Bryan Burk talk about the many challenges they faced and their strategy for success.

So there you have it. The devil's in the details and we think these discs lok to have some pretty hefty add-ons. It will be very nice to see this movie at home in Dolby TrueHD surround!

But, but what about us folks that could not give two $"its about anything but the movie?


Being ‘forced’ (insert speel about self-determination here) to buy 3 disc set when I only want the movie, oh well guess I'll have to buy it anyway, else the wife will have a conniption

And as a side note, why not include deleted/bonus scenes right where they belong, in the movie itself, they surely have enough space on the disc for an additional 10min of footage
TRT posts on July 18, 2009 14:15
(Finger point) Engage!
Post Reply