Zachary Quinto to Play Spock in 2008 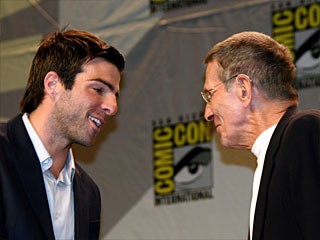 Zachary Quinto to play Spock in 2008

It's (hopefully) no great secret that JJ Abrams, Brian Burk and crew are producing a Star Trek XI prequel film in 2008. What was just announced this weekend at the 2007 Comic-Con event in San Diego was that Zachary Quinto (who plays Sylar on Heroes) will be playing the part of the young Dr. Spock. Also announced was that Leonard Nimoy will also play the role of an older Spock in the film.

JJ Abrams is still looking for the actor who will play the young Captain James T. Kirk, however they seem completely up in the air on that particular detail. IN addition, William Shatner has confirmed that JJ Abrams contacted him about playing a part in the movie, however neither could figure out how to make the details work out such that it didn't seem forced or detract from what is apparently a very good script. Rumors have included Matt Damon, among others, however he might be getting too old to pass for a 25-year-old Federation Captain-to-be.

Originally, JJ Abrams was slated to only Produce the movie, however after reading the script he decided the film was potentially too good and wanted a more proactive role in its production.

JJ Abrams is currently working on wrapping up his other big secret film, codenamed Cloverfield - a super-secret (rumor-filled) monster movie with very few details and an even more cryptic trailer.

Check out the Comic-Con video here.

Read the Complete Thread
Clint DeBoer posts on August 01, 2007 21:44
You forgot one: JJ Abrams can make a 1/3 scale Statue of Liberty head fall in the middle of the street in a cryptic teaser trailer and no one questions it, but instead spends all their time guessing what the movie is about…
mike c posts on August 01, 2007 18:49
says in the article that they still don't know how to make all the pieces fit like how the old kirk and spock will play in the movie … what a joke.

this is JJ Abrams.

JJ Abrams can introduce POLAR BEARS in a tropical island in lost and not have to explain why or how that happened.

JJ Abrams can create the Rambaldi mystery in Alias, spin it for several seasons and then not conclude it … or at least explain millions of things.

JJ Abrams thinks everyone has a memory so short that he has no responsibility in explaining why he did something a season before because he thinks people have forgotten already.
davestar posts on August 01, 2007 10:46
Not to be a jerk about this, Mr. Spock was the pointed eared science officer on the Enterprise, Dr. Spock wrote a best selling baby book.
Post Reply