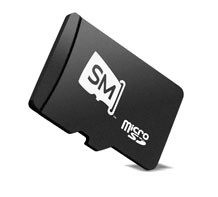 As the world’s largest supplier of non-volatile memory technology SanDisk knows a thing or two about memory. The company has just announced a deal with four of the largest record companies along with retailers Best Buy and Wal-Mart. The new media called slotMusic is simply a 1GB miniSD card preloaded with music in MP3 format. The slotMusic will be sold free of DRM copy protection and 1GB of storage leaves plenty of space for digital extras.

SanDisk’s plan has the backing of at least four major record labels including Universal Music Group, Sony BMG Music Entertainment, Warner Music Group Corp and EMI Group – expect a catalogue of available titles soon. The slotMusic format emphasizes flexibility and will come with a mini-USB adaptor so you can easily slide your new music onto a PC or simply plug the tiny thumbnail sized cards into any of a variety of miniSD compatible devices.

The new slotMusic format will have several things going for it. It’s more flexible than a CD because its content can be fed directly into most of this generation’s gadgets. You won’t need a PC and there is no transcoding or ripping to make your music files portable to any number of devices. MP3 is a nearly universal music file format nowadays and can be read by anything from a car stereo, cell phone to an iPod. Lack of DRM means easily consumable media on your terms, exactly what the music buying public has been after for years.

The worst thing about slotMusic is it’s just too small! I will lose or break anything of value that’s not at least the size of the palm of my hand. MiniSD cards are the size of my thumbnail. I’ve swallowed vitamins smaller than that and I’m afraid slotMusic won’t even provide proper nutrients.

College students suffer enough pursuing their higher education. SanDisk’s new format is so small you’d have a hard time rolling a flea on one of those things. What are students supposed to do with a Pink Floyd slotMusic cover?

To be fair, nothing is stopping slotMusic from coming loaded up with 320bit MP3. But even the high-bit MP3 isn’t enough when paying a premium price for music. I don’t think I’m alone demanding to buy music that is as close to the studio’s master recording quality as possible.

now that's what I'm talking 'bout!
Hi Ho posts on September 23, 2008 22:47
A 1 GB card? A CD holds 700 MB. Why not load up the card with CD quality audio instead of MP3s?
efzauner posts on September 23, 2008 20:16
oh hell
I love music and I love to buy music, but the industry makes it hard for me to do that. I hear a song on the radio! I love it! I want to buy it! how do I know what it is? I go to the station web site. Why cant I get a playlist with a “buy it now” from a music download site or Amazon so I can buy the CD? I listen to XM radio I hear a song, I love it, I want to buy it.. why cant I press a button on my XM receiver to record the track title, then I plug it into my pc and a “Buy it now” button apprears. NO. I had to write down the show title, search on the web for it, create an account on the DJs site and ask what the title is based on my recolection of some lyrics.. Finally someone from Russia replied. took me bout an hour!! WHY???

I find a CD I love. I buy it.. Why arent the MP3s already on the same CD? There are so many creative ways to make it very easy for me to spend my money on music but the industry just cannot figure it out!!

Only the music industry is to blame for their sad state.

gliz, post: 460288
I have been on a CD buying spree as of late. I want something in my hand for my money. Files can be corrupted. I like my CD's

I agree. I still buy CD's. I use the iTunes music store to browse, then purchase actual CDs…..
Post Reply