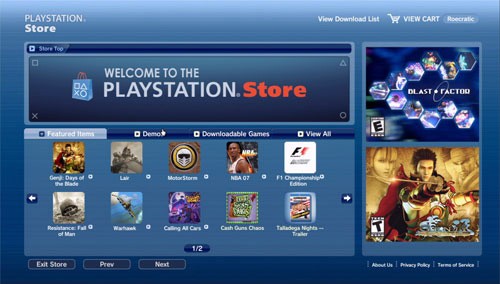 Not to be outdone by Microsoft’s recent announcement that it’s teaming up with Netflix on LIVE for streaming movie downloads – Sony has a movie announcement of its own. Sony one-ups the Washington based software empire with high-def downloads instead of simply streaming older sub-DVD quality movies.

Sony launched the PlayStation Video Store this week where users can already download movies and TV shows, some are even in high definition. There are in fact over 300 films and 1,200 TV episodes currently available. To get in on the entertainment all you need is the latest firmware 2.41 installed on your PlayStation 3. Sony’s new video store even gives users the option of buying or renting certain entertainment titles.

The store is easily accessible from your XMB under the PlayStation Store icon. You’ll find standard def movies rentals cost $3 or $4, HD rentals are $6. If you’re downloading HD movies you better have plenty of extra space on your console’s drive. Each film downloaded will take up to 8GB of storage. Standard-def movies will take up to 2GB.

Doing some quick math, a 60GB PS3 will hold about 30 SD movies. The same PS3 will only hold about 8HD. TV show browsing on PlayStation Video Store features a smart option of browsing by network. You’ll find A&E, History Channel, Adult Swim, Discovery and more. One sad thing about the video store so far is that there simply aren’t any movies for purchase in HD. Users have also complained that the interface is a little buggy and will need a bit of ironing-out from this early stage of the service’s development.

There are some other minor annoyances too, like mysteriously missing episodes. No, we’re not talking Fox Mulder and the X-Files here. The service boasts all three seasons of Arrested Development, for instance. However, if you’re interested in getting up to speed on the adventures of the dysfunctional Bluth family, you’ll be disappointed. Inexplicably missing from the Arrested Development library are episodes 1 and 3 from the first season. There are probably many more such inconsistencies so until Sony can fix this issue, it’s not the most reliable way to keep up with your favorite shows.

A very cool feature for travelers is the option to transfer content to your PSP for viewing on the go. The PlayStation Video Store is even accessible from your PC. Considering how easy PlayStation 3 Hard Drive upgrades can be with any affordable PC HDD, archiving purchased content becomes an attractive option.

Sony’s Video Store compared to Xbox LIVE - Netflix alliance still represents a trade off. Sure you’ll get better quality audio and video. But, you’ll get a much smaller library of films than what’s offered by Netflix. Not all studios are on board yet for Sony’s video store. There is also a matter of cost, it costs LIVE subscribers nothing extra to stream Netflix movies but Sony’s video store requires purchase or rental of each movie. I guess it’s true what they say about quality, you pay for what you get.

Clint DeBoer, post: 434993
These comparisons are Apples to Oranges IMHO. Netflix is about fee-less streaming in real time. Everything else (so far) is about fee-based downloads.

Well, Netflix streaming isn't really free on Xbox. You have to be a Netflix subscriber and and an Xbox Live Gold member. That's $14/month at best for the cheapest Netflix sub w/1 movie at a time and a year sub to Xbox Live. It's just a bonus if you have those things, but not “fee-less.”

engtaz, post: 438564
I have both sytems but what upsets me is the poor game titles for the PS3.

D.R. Payne, post: 439245
I read somewhere that the PS3 titles were only in Stereo. It would be sweet if I read wrong.

AFAIK, it depends on the title. If it was mastered in stereo only, then that is what you will get.

-I watch on a 106" screen, are the video bitrates capable of providing a good picture at that screen size?

Certain movies are available in HD, which I would presume is at least 1080i. I think I am going to try one to find out. There are a large number of titles that are in SD only, presumably 480i/480p, for faster download because the file size is MUCH smaller.

-What are the audio bitrates and codecs compared to BD?

I couldn't tell you yet, but I would presume it is also by title as to what you get.

-Are there chapter select menus? Extra features like deleted scenes and commentaries?

No extra features or menus on the titles I tried, but you can skip via chapters.

-I haven't bought anything through the PSN since Stardust HD came out. Have they cleaned up the purchase process so that it's less painful?

Less painful than what? It hasn't changed - add via a card registered to the account, or you should soon be able to buy playstation funds cards to redeem at the store.

I guess it comes down to “How much quality or perceived quality am I giving up for this convienience?”

I don't think the quality of the video or audio will be an issue, but if you want extra features you may miss out. For many movies, I can do without the extra features, however I do watch them for movies I like.
D.R. Payne posts on July 29, 2008 12:12
I read somewhere that the PS3 titles were only in Stereo. It would be sweet if I read wrong. While I like my PS3 quite a bit, I have some concerns with this service as opposed to say a BD:
-I watch on a 106“ screen, are the video bitrates capable of providing a good picture at that screen size?
-What are the audio bitrates and codecs compared to BD?
-Are there chapter select menus? Extra features like deleted scenes and commentaries?
-I haven't bought anything through the PSN since Stardust HD came out. Have they cleaned up the purchase process so that it's less painful?

I guess it comes down to ”How much quality or perceived quality am I giving up for this convienience?"
engtaz posts on July 27, 2008 18:31
I have both sytems but what upsets me is the poor game titles for the PS3.

engtaz
j_garcia posts on July 18, 2008 12:35
I checked it out last night and there are quite a few titles on there that interest me (as rentals) because I want to see them but not sure if they are worth buying yet. They also have a selection of anime!!! For me, it takes about 1/2hr to download about 1.5g, so a 3-4G movie would be an hour or more. Perfectly fine to me - just fire it up while we are eating, and by the time the dishes are done, the movie is ready. I am going to try out a few episodes of something tonight. Anime episodes were just ~350M a pop.
Post Reply