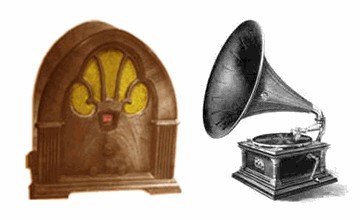 The really bad joke that the old media companies, member companies of the MPAA or the RIAA, have become as they flail about trying to staunch the flow of economic change in the internet era just keeps getting sadder/funnier depending on one's point of view.

As an age old battle, as old as the dawn of radio and the phonograph, between the RIAA and the National Association of Broadcasters (NAB) over royalty payments heats up with a pending bill in Congress, a music industry group, musicFIRST, that was instigated by the RIAA has begun doing silly things in public like calling radio just another form of piracy.

It’s a form of piracy, if you will, but not in the classic sense as we think of it.  Today we gifted them with a can of herring, about their argument that they provide promotional value.  We think that’s a red herring.  Nobody listens to radio for the commercials.

While this obvious genius is correct that people do not listen to the radio for the commercials, the promotional value being referred to are the songs being played on the radio which are effectively commercials for the recording artists and their record labels.

The RIAA and musicFIRST, of course, view radio stations making money from playing their work without compensation theft akin to file swapping.  The NAB has long maintained that playing music on the radio constitutes free advertising for the artists and labels, leading to additional record and concert ticket sales and refers to the proposed fees as a transfer tax from local radio stations to international recording conglomerates to prop up the failing business model of selling shinny plastic discs.

What should be damning to any RIAA argument against the promotional value of radio is an equally age old practice by the recording labels: Payola.

It seems the RIAA, tired of doling out payola to indies or whatever they call them now, has decided to make a play to turn the tables on the NAB with the hue and cry of piracy that they have been stirring up.

The most recent battle over forcing the NAB to make royalty payments to the RIAA began in Congress last year and is up for subcommittee votes this week.  In a move to end the royalty exemption that terrestrial broadcaster radio has enjoyed ever since music was first broadcast over the airwave, measure HR 4789 was introduced by Hollywood puppet Representative Howard ‘Hollywood’ Berman (D-CA) that would repeal the exemption and similar legislation was simultaneously introduced in the Senate as S 2500 by Senator Patrick Leahy (D-VT).  The legislation, of course, has the support of the RIAA.

Presently, every other transmission medium including so called Internet radio, satellite radio, and cable radio all pay performance royalties that terrestrial broadcasters never have.  Under current law, terrestrial broadcasters pay over $450 million to music publishers such as ASCAP, BMI, and SESAC while the RIAA and the recording artists get zilch.  The loophole that traps other transmission mediums is the 1995 law, The Digital Right in Sound Recordings Act, which forces any digital broadcasts to pay performance royalties as well as composer/publisher royalties.  Despite the other transmission mediums providing the same supposed promotional benefit, Congress has seen fit to burden them with royalty payments, albeit with a little RIAA lobbying, while analog terrestrial radio slips through.

Last July, Rep. ‘Hollywood’ made statements in Congressional hearings concerning the wellbeing of destitute older artists who are not paid royalties for their works while radio still makes advertising money from airplay.  To support the position that artists deserve better compensation, the RIAA trotted out a parade of older artists to beg Congress to put food on their plates.

Seems these artists don’t like to have to continue working & touring and would much rather that money just be mailed to them.

I wish someone would just send me money for the work I did in the past too.

The NAB response to the July hearings was twofold.  The NAB pointed out that Congress has not granted this royalty payment for 80 years and should not change course because the RIAA is desperately trying to prop up a failing business model dependent on the declining sales of physical media.  The second major point was that despite dramatic testimony from artists, it is the labels that will benefit the most, making far more money than would actually go to the artists.

The NAB then followed up with another attack.  In a letter to Representative Berman in October, the NAB states that it also supports the idea that artists deserve better compensation.  However, the NAB requested that Congress consider how the RIAA treats the same artists that it claims to champion for fair compensation from the NAB.  The NAB even offers helpful suggestions at to which rocks to look under, compare the income that the labels paid to their parade of artists verses the amount of income that the labels kept for themselves.

What’s the most interesting about the whole RIAA stance that they just want to help these poor artists make a living are the contract terms in most record deals.

Under most record deals, performers are only paid by the labels based on the sales of records.  The actual royalty paid is often less than 10%, but it gets worse.  The label makes the performers pay back any monetary advances for production as well as production costs for the actual record manufacturing before any royalties are paid.  On top of all that, the artist signs away the copyrights to the record label, they no longer own the rights to their music.  The artists pay for the record to be made but they do not own it.  Finish all of this off with the fact that if/when a label sells off the copyright to another party, even the record sales royalties disappear because the new owner is not required to honor these payments as part of the sale.

Any supplemental income that an artist earns comes from touring, performing, and merchandising.  Older musicians who are not actively producing new recordings have minimal sales volume, and as age advances, often find that the rigors of touring become impractical.

So, what has the record industry done to help these aging artists?

Why, they lobby for laws that limit the ability of the artist to sue to break bad record deals and eliminate any financial responsibility for retirement care.

Neither the RIAA nor the NAB cares two cents about the artist.  All of this is nothing more than self interest with the artists as pawns of two powerful industries lobbying congress and pulling the political stings of marionette lawmakers to get a better deal.

Hmm... kinda sound like the SAG actors union strike that's in the works this week...

Hopefully Congress can actually muster a best case outcome: level the playing field for all broadcasters to pay the same royalties, accept the presence of complimentary businesses, do away with the indie loophole for play list bribery, make the RIAA pay the artists fairly, and put a stop to some of the RIAA’s other unsavory practices with respect to recording contracts.  I highly doubt it; too much lobbing money for Congress to do the right thing.

So after this piece of prescience on the part of the Onion, next up for the RIAA:

Read the Complete Thread
dem beats posts on July 01, 2008 14:22
I never support it. I just download it from teh intarwebz.

I refuse to support their tyrany!!!

Honestly though they are being complete jack asses and need to be pulled back to reality.
3db posts on June 30, 2008 12:14

jliedeka, post: 427881
Actually, that's not far from the truth. A publicly traded company is legally obligated to maximize shareholder value by whatever legal means necessary. There was a court case that established that. If a public company fails to do whatever it takes to make profits, they can be sued by their shareholders. That's the system we live under.

jliedeka, post: 427815
After reading the article, I finally understood that record labels use the same business model as pimps. I've been thinking for some time that supporting independent musicians is probably a good thing. It's not like I was buying Brittany Spears records anyway.

PIMPS?? you should see how bad blue's artists got screwed over by these guys. I've never seen a bigger bunch of immoral morons as the riaa..screaming like little kiddies “please stop the downloading of music illegally” when they turn around under the same breath literally f??k over their artists.

Seems to me they saw a lost oppertunity with the internet and are now gunning for it to try and regain some sort of footing from their ineptness and lack of foresight.
jliedeka posts on June 28, 2008 00:14
Actually, that's not far from the truth. A publicly traded company is legally obligated to maximize shareholder value by whatever legal means necessary. There was a court case that established that. If a public company fails to do whatever it takes to make profits, they can be sued by their shareholders. That's the system we live under.

Jim
fredk posts on June 27, 2008 19:22
This certainly supports the supposition that your average corporation is a phsychopath. A cornered phsychopath it a very dangerous creature though.
Post Reply