Judge to RIAA: You Have Burden of Proof 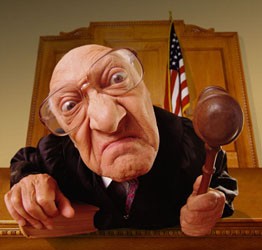 RIAA told to rethink its strategy

Anyone who has a pulse has followed the RIAA lawsuit saga over the past several years, with the RIAA suing various customers, also called litigants, over illegal file-sharing practices. The chief tool they have used is a company that closely monitors Kazza file share folders and takes snapshots of users' 'sharing folders' in order to present evidence against them at lawsuit hearings - if it even gets that far. To-date, many cases have been settled out of court, but some have gone to trial and a recent series of rulings has gone both ways for the RIAA.

The most recent event has U.S. District Judge Kenneth Karas ruling Monday to reject the RIAA's claim that a Kazaa user who merely "made available" copyrighted music necessarily violated the law. Rather, he said, the RIAA would have to demonstratively show that unlawful copying actually took place.

You mean they have to prove that the law was broken? That's just ridiculous. How absurd.

We're not condoning file-sharing - in fact, we really don't recommend it. The RIAA's unconscionable practice of suing its potential user-base, however has had us mind-boggled for years. In any other industry the negative PR fall-out would be deafening. The better way to combat piracy would seemingly be to eliminate the dramatically more prevalent foreign distribution networks which can be viewed at any Chinese city in plain view in the streets. This of course is a tad more involved than suing little old ladies, so we understand the reticence of the RIAA to book some international lawyers and a plane flight.

The case in question probably isn't lost by the RIAA since they apparently have some evidence against the plaintiff - one Tenise Barker - involving actual file sharing, however it makes the act of winning a lawsuit a bit more involved for the RIAA. The simple presence of shared files does not indicate breach of the law.

This case is of particular note for several reasons: One, the New York-based federal judges are seen to be experts in domestic copyright law, so any decisions made here will likely have ramifications nation-wide. Two, there were a very large number of outside groups which filed briefs to the case, including the U.S. Internet Industry Association, the MPAA, the EFF (Electronic Frontier Foundation), and the Computer and Communications Industry Association, meaning the court benefited from a range of views and increasing the importance of this week's decision.

This ruling is a clear reversal of a previous ruling which stated essentially that simply putting songs in a public place where they could be downloaded was grounds for assuming they had, in fact, been shared. This was the result of the case vs. Jammie Thomas which resulted in a $222,000 ruling in favor of the RIAA. The problem with this ruling is that the ramifications are catastrophic. If someone accidentally enables file sharing on a disc located on an open network
are they suddenly liable for hundreds of thousands of dollars in penalties? With the relative complexity of computers these days, it's important to realize the downwind effects of laws put into place through these proceedings.

Before you get too happy that the RIAA "took one on the chin", realize that the point of this article, and consequently the judges ruling, was to encourage the RIAA to make a stronger case and avoid some of the perils we just brought up. With that said, the judge delivered some guidance to the RIAA on how to accomplish this - and rightly so - stating that they need to "affirmatively plead that defendant made an offer to distribute, and that the offer to distribute was for the purpose of further distribution, public performance, or public display."

That at least implies motive - which is much better than the potentially inadvertent "making available" claim that has been effective so far.

This is worth following for those who have an interest in copyright law and how it will likely effect Internet users down the road.

Read the Complete Thread
enjoythemusic posts on April 11, 2008 16:03
As the editor for www.EnjoyTheMusic.com, i have been following the RIAA over these many years (use the site's search engine on main homepage). Between the RIAA and Monster Cable…

Anyway… the newest outcome is a nice revelation, as someone if fighting back!

www.arstechnica.com/news.ars/post/20080313-andersen-attorney-on-riaa-suit-they-cant-run-now.html
Jack Hammer posts on April 02, 2008 13:03
I think the judge made a wise ruling. Intent has long been an important part of the criminal legal system. Civil cases live by a different set of standards, but in a situation like what the RIAA is trying to accomplish, I think this makes sense. Simply have a folder of music that “can” be publicly accessed by others, on it's own doesn't prove that the poster put it there solely for the purpose of illegal copyright infringement and distribution, regardless of what we all know to be true.