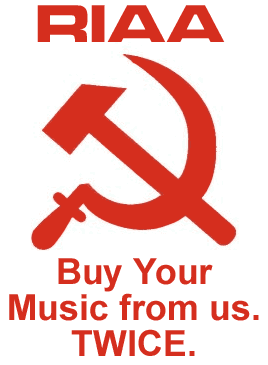 Buy Your Music from Us... TWICE.

Hopefully we got your attention.

A news story has been circulating around the Internet (example 1, example 2, example 3) that essentially demonizes the RIAA for bringing a lawsuit against some guy who copied CDs to his hard drive. That would be preposterous. That would be appalling. That would be something too stupid to believe. And it is. Seems that there was not a whole lot of fact-checking going on this week (myself included) and the story was reported in a rather, shall we say, slanted fashion.

The RIAA is a mixed bag it seems. Talk to some and they are the evil empire, going after college kids and single mothers who can't afford to buy CDs in the first place. Others argue that stealing is stealing and people deserve what they get. My stance has been one of amusement at both parties. On the one hand you have the consumer who somehow convinces themselves that it's OK to take another person's property without paying for it. Let's just make it perfectly clear - that's wrong, regardless of how much it costs or what you may justify in your own mind about the amounts which go to the artists, etc... The other side of the comedic coin has a dinosaur-like industry that refuses to innovate until it is forced, and is constantly battling to freeze time at 1990 where it can comfortably sell music at record profits and "file sharing" means burning a mix cassette of popular songs.

Both perspectives are wrong, but the RIAA continues to lope along, making incredibly bad choices. While the latest example has an Arizona man being sued in Federal court for sharing over 2000 recordings from his (or his wife's depending on how the details lay out) personal computer via Kazaa (is anyone still stupid enough to use these apps?) what was initially reported was that there is no aspect of the case (yet) dealing with file sharing. People hate the RIAA and the news media is apparently taking anything fed to it by overzealous sources (ie anti-RIAA attorneys) and braodcasting it. If the RIAA were simply going after this man for storing CDs - that he rightfully owned - on his PC, we'd have a major problem. But the RIAA doesn't seem positioning itself to cross this line - at least not in any unique way that isn't tied to a file-sharing lawsuit. Hopefully, they won't slip something in that gets mixed into case law and creates problems for the fair use of material. Jeffrey Howell, the accused, has decided to fight back in this case. The trouble is, he'll likely lose. If you share music via the Internet you are guilty. That's pretty simple.

It seems Mr. Howell has failed to produce his requisite brief by the court ordered deadline of January 11. This could turn out to be very bad for Mr. Howell…when a federal magistrate wants something, he usually gets it one way or another.

However, in a surprising development, the Electronic Frontier Foundation has supplied the court with its' own amicus curiae brief. Whether or not the court accepts this brief remains to be seen, as I don't believe they were ever invited to respond.

The Frontier's brief takes the novel position that distribution requires consummation. That is, that the plaintiffs are thereby required to prove actual downloads of the illegal uploads in order to prove infringement (via distribution).

In the not so common sense world of litigation, all is not so simple. But last time I checked, if I were to hand out 1,000 circulars (door to door or face to face, it does not matter) offering free pizza, whether or not those circulars were read is irrelevant…the mere act act of handing out the 1,000 circulars constitutes the act of distribution…not the reading. This brief doesn't pass the smell test, and I'll be surprised if it is accepted by the court.

On the CNET page I posted above, the author is Greg Sandoval, a former Post writer, so maybe he has an axe to grind (do ya think?), but he must have a bigger hangover than majorloser (who's been amiss since the game :eek, and a much bigger ego.

Firstly, his page reads January 7. Talk about an unscrupulous writer. The correction did not even come out until the 8th (I have an email from Mr. Fisher on Monday morning the 7th apologizing for the way I “felt” (I did not know reporters were so emotional ). I've been following the story, and this case for that matter rather closely. All information I have shows the correction was made on the 8th, not the 7th. I stopped attempting to persuade Mr. Fisher Monday morning, and promptly complained to the editor (Monday morning), and forwarded a copy of that complaint to Mr. Fisher.

Secondly, Sandoval writes the correction was made on Saturday. Not possible and untrue.

So the caveat on the caveat (as in the story on the story): BE SCRUPULOUS WITH ALL THE INFORMATION OUT THERE! Whether it's CNET or The Washington Post, the words are often riddled with mistakes! Get your information from several credible sources.
Johnd posts on January 09, 2008 12:57

I'll tell ya, the net is swarming with news of this correction, most probably because so many blindly ran with the misinformation immediately after the story ran. Here's a CNET story on the correction of the untrue story (must be a slow news day, or other media likes pointing out other's mistakes) that spread like wildfire…it's all over the place!

I'm going to write a letter to the editor, part thanks, part it's not enough, but I won't be able to get to it til tomorrow. Thanks to all for the support. This news is especially relevant here at Audioholics…we don't have to love the RIAA, but let us understand they are only seeking to protect copyyright interests here.
Post Reply