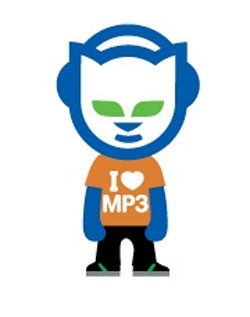 Napster has proved to be a chameleon in the online music industry. The once outlaw peer-music sharing service hit the music biz before being snuffed out only to rise again as a legit music service. The popular music site has just changed again, shifting its pricing model to $5 a month for an all-you-can-eat DRM buffet - and also added five-a-month, DRM-free tracks for desert.

Anyone who has seen the 2006 film Italian Job has heard Napster was so-named because it was stolen from Seth Green by a college room-mate while he was taking a nap. Of course the story is pure fiction, but underscores the file sharing site’s legendary status. It’s a brand that wouldn’t die even after being forcibly shut down in 2001. The name was reborn in 2003 as a legitimate online music service, one of many employing Microsoft’s PlaysForSure DRM. Check out DRM’s sad yet sordid saga in our scintillating symposium: The Long fall of DRM.

The service was purchased by Best Buy in 2008. It was an obvious effort for the retail giant to get an online foot-in-the-door against the iTunes juggernaut. Apple’s online music service has since outsold all brick-and-mortar music retailers including Best Buy, Wal-Mart and Target. It’s evidence that we’re in a new age of music where scalability seems to trump sound quality. According to an independent study it seems modern music fans actually learn to prefer hyper-compressed MP3. See Gene’s hard-hitting editorial: The Dumbing Down of Audio.

Love it or hate it, the 128-bit MP3 has become the ad-hoc standard in music quality for a whole generation. Although you might expect that as the price of digital storage declines and broadband gets broader; one outcome might be an increase in bit-rate and audio quality of your average digital file. Don’t hold your breath!

To better compete in the online music world Napster has made a few tweaks to its music-business model. The least expensive version of its service has been reduced in price – a significant drop from $12.95 to just $5 bucks. As a bonus to compete with the new DRM-free music offered by other services, Napster has decided that for your $5 you also get five DRM-free downloadable music tracks per-month.

The basic service still operates much the way it has since ’03. You pay a monthly fee for access to a seven million song library. These tracks are available to you via strict DRM regulations that prevent you from moving the protected tracks around to other PCs and/or portable devices.

There is a premium membership that gives users access to the same DRM-laden music library in a portable format. You can move them around in compatible devices (basically the same as any of those Microsoft DRM-10/Janus/PlaysForSure devices) including many popular brand MP3 players. But that compatibility doesn’t extend to Apple’s devices including its mammoth-popular iPod and iPhones. Not that you’d notice but it’s also not compatible to Microsoft’s would-be iPod-killer known as Zune.

As a side note to you Canadian or European customers – Napster’s new deal is only available in the US.