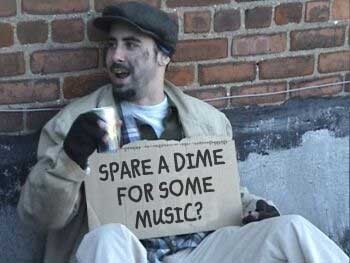 Hey, Buddy! Got any music?

As last week's leak that Apple may be in talks to convert iTunes over to a subscription-based service that is included with all iPod sales still simmers, this week has several music companies in discussions. Sony BMG Chief Executive Rolf Schmidt-Holtz confessed to a German newspaper that Sony was in discussions with several other music labels and partners to offer an online music subscription service. Warner Music Group confirmed (per the LA Times) that as early as last Thursday it was discussing a new subscription service. This one would come in at around $5 a month and would possibly even be tacked onto existing Internet or cell phone bills, allowing users to download, copy and share music. The resulting revenue would be divided among the major participating labels.

Subscription services are not new, however no one has tapped the holy grail yet in terms of downloadability and portability. It's not enough for consumers to simply access music while trapped to their PCs - they want to take it with them, be it via iPod or CD. Still, labels really seem to be understanding that a paradigm shift is inevitable and, while they are late to the game, they seem to be getting on board with it.

Early this year, Universal Music Group launched a subscription service with Nokia called "Total Music". Nokia is attempting to bring others on board as well. With Total Music, songs come pre-loaded on a cellphone. After a certain period of time, the customer pays a monthly service fee for unlimited access to music. This is an interesting model, however it again ties to user to specific hardware and doesn't take advantage of the advertising revenue potential that could replace nickel-and-diming users for the highly-restricted delivery of compressed music content.

The biggest news out of all this seems to be the notion of piggy-backing on top of existing service agreements. Rather than begin a new wave of subscription-based billing, the music industry wants to ride on the backs of cellular providers. While this might work with Apple Computer's iPhone and AT&T - I don't see any formidable phone products from anyone else that would cause me to think this would be a raging success. There is also the issue of making any mandatory surcharges for music - if this happens, users are likely to balk. Given the cafeteria style of services offered by current cell phone providers, I doubt this will be the case.