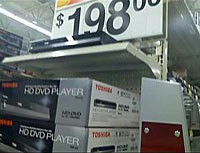 Over the last week or so, reports that Wal-Mart was stocking the Toshiba HD-A2 just below the sub $200 mark tricked in, spurred by blurry photos of said stock in various A/V forums.  More recently, Wal-Mart has confirmed the rumors for the November 2 price drop, but the rumors have spurred action from other retailers as well.

Circuit City and Amazon.com, looking to get the jump on Wal-Mart, lowered their asking price for the HD-A2 price before the Wal-Mart price was to take effect.  As the actual holiday season draws near, more retailers may begin to move on price, and some retailers may potentially introduce further reductions, in fact, it appears already to be happening:

Not to be outdone, Wal-Mart is now offering a Friday only special with the HD-A2 for only $98.87, so for those who can wait and can make it to the Friday sale, an HD-DVD player can be had for not much more than all but the cheapest crap DVD players.  Toshiba is still offering five free HD-DVDs on HD-DVD player purchases through February 28, 2008 and the $98 player qualifies.

But now Sears is entering the fray:

Sears is offering the third generation replacement for the HD-A2, the HD-A3, for $170 on Black Friday.  The third generation player also offers the on going five free HD-DVDs with purchase but also includes 300 and Bourne Identity packaged with the player for a total of seven movies.  Sears’ offer may not be the lowest player price, but for consumers who would prefer the latest player generation, the extra cost is offset by the additional software.

With Sear now intertwined with K-Mart as Sears Holdings, this is an interesting development when coupled with recent announcements that K-Mart is not going to continue carrying Blu-ray players due to price.

Toshiba says that the retailers have initiated the recent price activity and that the MSRP, which strongly implies the wholesale price that retailers pay, remains unchanged.

It will be interesting to see what sub $200 Toshiba players mean to the Chinese made Venturer HD-DVD player originally anticipated to be the first $200 HD-DVD player, which has not even hit store shelves yet.  Second tier manufacturers are going to have to limbo lower still.  Perhaps before the holiday dust settles, we may see players with MSRPs of $150 or lower.

The HD-A2 and HD-A3 are the entry level HD-DVD players offered by Toshiba and both support full interactivity and picture in picture features via HDi, Ethernet Internet connectivity to download additional movie special features and to simplify firmware updates, and support 720p/1080i resolutions.

Some general criticism has been made of this player models for not supporting 1080p resolution that is available on the latest, higher end HDTVs, but it is really a moot point on several levels.

The majority of retailers who are engaged in the HD-A2 price war typically cater to more mainstream consumers to whom they sell 720p/1080i HDTVs.  Every HD-DVD release to date has been at 1080p resolution, so for consumers who have 1080p capability but have been staying out of the war for cost, a good 1080p HDTV or scalar will more than adequately deinterlace 1080i.  There is no loss of detail or any sort of down resolution from 1080p to 1080i, all the 1080p detail is still there, the picture simply needs to be reassembled.

The reality is that at present, both HD optical disc formats represent miniscule sales when compared to SD DVD as is the installed base of compatible players.  If either of these formats are to survive and become established before the next big innovation comes along, someone is going to have to sell hardware and software for these formats at prices that mainstream consumers won’t balk at.  This is how a product becomes mainstream: when the majority of consumers consider the product to be worth buying for the asking price.

Read the Complete Thread
Kevin T posts on November 08, 2007 15:37
I figure that even if Blu-Ray eventually wins the format war, there will likely be fallout in the form of dirt cheap movies in HD-DVD format. With the five free HD-DVD rebate, the player has pretty much paid for itself—assuming I can find five freebies from the list that I want.

Since I needed to buy a DVD player for my wife’s sewing room anyway, this was an easy decision to make. She can have the Panny SD player that's currently sitting in the AV rack, which will be replaced by the HD-A2.

The funny thing was that when I arrived at the Wasilla, Alaska “Super” WalMart on the day of the “unadvertised” sale I learned that they had not received their stock of HD-A2s. They took my name down on a waiting list, but I figured I’d never hear from them again. I was shocked yesterday they called to let me know my player had arrived and I should come get it.

I just wish I’d thought to sign up for more than one. They would have made good stocking stuffers…
GlocksRock posts on November 06, 2007 16:18
I wouldn't have gotten one if it hadn't been for WalMart selling them for under $100, especially since I had a PS3 on the way. But it can't hurt to have a player for each format if the price is right.
annunaki posts on November 06, 2007 16:07
I think this will do a great deal for HD-DVD. The quicker they make these players affordable to the average consumer the faster they are likely to adopt a format. If Blu-Ray does not play along, I feel they will be on the losing end of this skirmish. My brother went out and purchased a player at Wal-Mart on Saturday morning. He lives near a small town (pop. 7,800). He is not the type to get an HD player but he did anyway because of the price.
owasse posts on November 05, 2007 16:55
Just My Luck!

I heard about the Wally World promotion too late! I went there this morning and the sale ended yesterday. They had two players left and they wouldn't honor the price even though they still had the sale price marked on them.
Oh well - there's always “Black Friday.”
aarond posts on November 05, 2007 13:18

stratman, post: 325720
Sony and Samsung will not slash prices on Bluray, on an interview given to Twice and Dealerscope, the top execs said they will not compete with HD DVD slash and burn pricing, this is is their logic: “The target audience for high-definiton DVD is still the early adopter or cinephile who is willing to pay a premium for the experience. What we're not going to do is chase a Black Friday price that's going to last seven or eight hours.” That statement came from Samsung's Tim Baxter, executive vp of sales and marketing CE division. The lowest you can expect any BR product this year is $399.00

As for Baxter's remark? Well it's hard sometimes to believe these people actually studied marketing.

are there really any “cinephiles” who are dumb enough to pay a “premium” for the samsung or sony name?
Post Reply