Are You Buying an HD-DVD Player This Christmas? 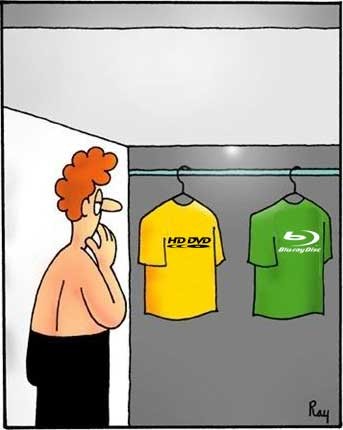 There are a myriad of news articles around the web pontificating upon the possibility of additional price drops and a dominant victor in the high definition DVD (HD-DVD) format war come Christmas. At Audioholics, it's our opinion that it's just business as usual and there will be no clearly defined winner. But with that said, it's you - the consumer - who will help determine the truth.

So we've set up our own little poll to gauge interest in new HD-DVD purchases this Christmas. We'd like you to participate.

What we're interested in are people who do not already have an HD DVD or Blu-ray player. These are people who are either not interested, or who are salaciously drooling over the prospect of making a purchase around Christmas time.

We want to know if you're waiting it out, hoping the format war eventually picks a clear winner, or if you've already made up your mind and are simply biding your time until Christmas when you will take your shot and select your own winner.

There are numerous factors in the decision-making process, and we're aware of all of them. For example:

Who will win the format war? We know but if we told you, you wouldn't believe us. Actually, we have told you and most people still don't believe us. In either case, we're interested in your purchasing plans this Christmas. Tell us what you're going to do and help us write our next editorial about the real winner this holiday buying season.

Take the POLL and Vote!

GlocksRock, post: 359429
I guess this thread can be unstickied since Christmas is over.

It's all blu-ray, baby!
GlocksRock posts on January 17, 2008 13:17
I guess this thread can be unstickied since Christmas is over.
Sailordotcom posts on December 23, 2007 15:14
i did not buy either, i willing to wait, i presently own a Denon 955 and very please with its functions. i am willing to wait for a couple of years. by the way i am a new member to this thread, and looking forward to read a lot of your posts.
westcott posts on December 21, 2007 09:37
I bought both for Christmas!!!

How can you watch what you want if you don't own both?

On the other hand, I am not too impressed with film quality on some transfers and the headaches of hdmi switch compatibility is still a nagging problem.

Audio is another anomoly I wish was not an issue.
ducker posts on December 17, 2007 14:52
hm… bummed out what I filled out… I guess I put a neither comment last month… well I got a PS3 recently, so I'm part of the BD crew now!!
Post Reply