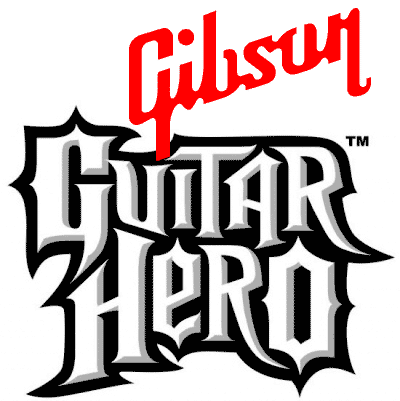 This one's a little like watching cousins sue each other in court, but Gibson Guitar Inc has told Activision Inc that its wildly popular Guitar Hero video games infringes one of their 1999 patents which deals with simulating a musical performance. And no, Gibson didn't patent air-guitar. Last week, Activision filed a lawsuit, asking a U.S. court to find the claim invalid and bar Gibson from seeking any damages.

What makes this so weird is that Gibson's Les Paul is the model for the game's newest wireless guitar. This is the premier guitar controller which has the ability to handle various skins. For Gibson to suddenly say "Oh by the way your game is in violation of one of our patents" is a major shock considering the relationship. Gibson has been a high-profile partner in the Guitar Hero games, with Activision licensing the rights to model its controllers on Gibson guitar models and to use their likenesses in the actual gameplay.

According to Activision's lawyers: "Gibson is a good partner, and we have a great deal of respect for them. We disagree with the applicability of their patent and would like a legal determination on this."

At the time of the Reuters report, Gibson had not made an official comment.

According to the Gibson patent, which can be viewed online, some of the claims include:

A system for electronically simulating participation by a user in a pre-recorded musical performance comprising:

The letter submitted by Gibson's law firm states: "Based on our preliminary analysis, the 'Guitar Hero' software (including any expansion packs) and the guitar controller provided by Activision being used as a musical instrument (packaged with the software or sold standalone) are covered by the... patent... Gibson requests that Activision obtain a license under Gibson's patent or halt sales of any version of the 'Guitar Hero' game software."

Activision is maintaining that its games do not infringe Gibson's patent, and that the three years the company delayed raising its claim pretty much implies permission or an implied license to use any patented technology.

Gibson is one of my company's customers.
Clint DeBoer posts on March 17, 2008 10:59
Is there a word that combines aspects of incest and masochism? Cause that's what this feels like to me. Let's license your guitar for use with our game… and then you can issue a letter seeking compensation for a patent violation… and then we can be forced to sue you.

Are we having fun yet?
birdonthebeach posts on March 17, 2008 10:09
I have filed my Les Paul wii controller into the shape of a Strat in protest….
Post Reply