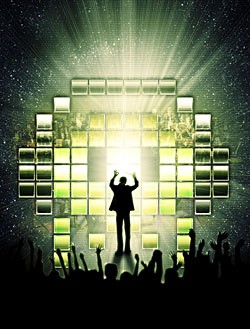 Music in video games has come a long way from its 8-bit midi origins and they’ve been picking up steam lately with all the new rock musician simulators like Guitar Hero and Rock Band.

But what was once an annoying series of bleeps has turned into one of the hottest outlets for new bands to get exposure.

It takes a special talent to create the score for a video game - these days, it takes all the talent and professionalism as that of a big budget movie. If you’ve ever played a cinematic game like Halo, you’ve probably felt how music completes the best sequences in the game. A good musical score can make a moment from a game stick with us forever.

Today, there is even a traveling concert called Play! and Video Games Live that perform popular music we may recognize from our favorite games. The popularity of such events is only possible in so much as we associate good experiences with good music from good games. If you’ve never played a video game, you just wouldn’t get a concert like Play!.

But not all in-game music is part of a soundtrack. There are many in-game soundtracks that are playing back more conventional popular musical structures. And no other type of video game does this better than sports games.

Any veteran gamer with a favorite sports game they play year after year will probably attest that at some point they’ve shut off the sound and just played to their own recorded music. But the current generation of game consoles heard you doing this, and adapted with multimedia functions - and so have the games.

Video games are the new radio

EA Sports has an in-game music system called Trax that provides each game with a playlist of about 20 songs. If you play any EA Sports games, like NHL Hockey, Madden NFL Football, NBA and even FIFA, you’ve heard them – a collection of smaller indie bands and some established groups adding to the mix.

Indie bands like the Ponys, Young Punks or the Black Keys get amazing exposure appearing in a video game. While you’re running up the pitch at FIFA or scoring one-timers in NHL and touchdowns in Madden, your mind is mostly distracted from the music, especially while you get to know the new game. It’s this distraction that allows you to unconsciously permit repetition of the music, so you might not even notice it at first. Repetition is while our minds are distracted is a positive thing for acclimation to new songs - it’s why FM radio is so redundant and why car stereos will never die.

It’s also why a lot of people will respond negatively to the music on some video games. Enough repetition and you start hearing a hook or a riff long after the game is done. If you hate the song it can drive you crazy. But if, just once, you decide you like that song, you’ll seek it out and might end up becoming a fan of a new band.

So, while you’re in the virtual game world, try to keep an open mind to the music. You might just be hearing an up-and-coming group getting its first big break.