Halo 3 Legendary Review - a Journey, a Way of Life 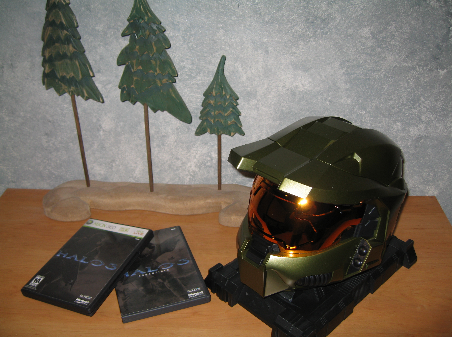 I wasn’t really going to try to get in on the Halo 3 Beta, but because it came with Crackdown, I got in for free. I was determined to not be suckered in by the slick Microsoft marketing, and I figured Crackdown was going to suck. Well, I downloaded the Crackdown demo and found it to be very cool. I ran out and bought it the next day and played Crackdown for nearly 3 weeks every night. If you haven’t played this game, then you should! In any case, I was now going to be able to play the Halo 3 Beta…

The Halo 3 Beta opened a day or so late as they had trouble with the servers or something. Well, it was “Beta” after all. So, I hoped on and played on and off with a few friends at various times, and it seemed to be a logical extension of Halo 2. Of course, we could only play online and with a max of 2 people per console. I was worried that this player limit might stick for the release, and be limited to 2 players only like Gears of War, but the final version lets all 4 people play.

I was starting to get the itch for the game, but didn’t want to go overboard as I am not this super awesome Halo dude sniping everything he sees. I saw a sale on some Halo 3 posters at a local video store and decided to pick them up and put one in my theater/game room. Hey, it was only $8 for two posters, I couldn’t resist.

One Week Before Launch

I didn’t preorder the game a year ago like some other people I know and figured I could just walk in any store on the 25th and pick up a copy. Well, one local game store was doing no-money-down preorders, so I decided I’d go ahead and put my name in so they could hold me a copy, just in case. Of course, the guy said they would be opening at midnight, so the idea of “playing before my friends” started rolling around in my head.

Ok, so I bugged a few friends about playing at midnight. My neighbor, Chris Seymour of http://www.seymourav.com (yeah, a shameless plug) came with me to wait. I live in a college town, so there were a ton of students standing in line, and I am sure most of them were planning in staying up all night to play and skip their classes the next day. Of course, I am a responsible adult… That’s why I was standing in line for a video game in the middle of the night!

The doors opened and the line of 200 people flooded into the store. I was about 50 people back, so I had to wait even more…

Chris and I step up to make our purchases. He gets the regular version; I pick up the Legendary Edition so I can one-up him. Of course, that may not happen while we play, but I have a Master Chief helmet to show off now. As we walk out of the store, the people in line behind us start saying things like, “He bought the helmet”, “Make way for the guy with the Master Chief Helmet”, “Make an arch!”. Then, to my surprise, they actually hold their hands up and make an arch for us to walk through as we exit the store. WOW! I didn’t know wasting an extra $70 would bring me this moment of Honor and Greatness! Time wasting, punky college students are great, don’t you think? :-)

As we were driving back home, Chris had to tear into his copy before we even get to the house. I guess he was more excited then I was. So, we finally get home (about 2 mins later) and rush down to the home theater room to get the game going. We leave my Legendary Edition alone since there was already a fresh copy to pop into the machine. We put it in, boot it up, and just sit and stare at the intro for a while. We had to take in the awe and grandeur of the menu screen before we played!! We couldn’t waste the moment on just killing! We finally decided to start the game and play some co-op, then wrapped up the evening with a couple of online matches with another friend who was still online. Btw, there were over 100,000 people playing at 3am when we got to the frag fest. Crazy!

We finally quit and went to bed. I am a late night kind of person, so I think I’ll be fine at work the next day…

I get to work late, and I am a zombie the rest of the day. I have a work training conference out of town in the afternoon, so I drive there half asleep, and can hardly stay awake in the nice dark room with the guy droning on in the front. The conference gets over late, and I get back home around 7:30pm. I call up a couple of friends to come over and play, and we got about 2 hours of some local multiplayer Halo 3 killing in, and we wrap it up early so we can all be functional the next day.

I still get up late, but I go down to my theater to check out my Legendary Edition instead of going to work. The Master Chief helmet is pretty nice. It has some weight to it and it’s very detailed. They did a good job of bringing some fantasy into the real world with this item. Anyway, I pull out the extra content discs and discover there is a calibration tool on one of them. There are some videos and other content on the other disc that I haven’t played with yet, as I didn’t want any spoilers before playing through the campaigns. I did run through the calibration, and it is fairly comprehensive. It took me through the standard steps that Digital Video Essentials does, and even asks you to use a blue filter to get the color and hue right. I realize what time it is, and finally get to work at 11am. “I am not a slacker, I am not a slacker.” I tell myself this sometimes, but I know the truth. After work I help a buddy work on his home theater setup by installing a projector mount and a Carada screen. We had a little snafu with something behind the wall blocking our screws so we didn’t get to finish and it was late. I got home around 11pm and I pop in Halo 3 again. I decide to hit the campaign in single player mode and play for a couple of hours. Ok, 1am and time for bed.

Would you believe I got up late again? And of course, I went down to admire my Master Chief helmet. I was strong, though, and didn’t put the game in the Xbox. I knew I wanted to write up something about my Halo experience, so I got a few pics of my new toy helmet (which my children are not allowed to play with) then headed off to work. Late for a third day in a row (no, a pattern isn’t developing!), and now I am sitting at my keyboard and typing up my “review” of Halo 3. Don’t worry, I’ll be a productive member of my company after I head home for lunch and a take a nice nap…

Read the Complete Thread
Alamar posts on October 01, 2007 15:43
Note: My POV is from reviewing campaign .. not MP which is probably going to be the “big” thing with H3.

While H2 & H3 have many similar things on paper the gameplay through the campaigns in H3 seems much smoother than what I saw in H2. Basically I do think that H3 is it's own game … it's not H2.1 as some other people are saying.
naisphoo posts on October 01, 2007 08:40
I'm pretty sure a lot of people are still waiting for their xbox to get back from the repair shop. Geez 33% failure rate …good luck playing halo.
autoboy posts on September 28, 2007 14:53
I thought that the system had been designed so that anti aliasing was easy on the GPU. 720P is a pretty low rez compared to PC gaming. I would think that the XBOX360 could handle some anti aliasing.
Wafflesomd posts on September 28, 2007 02:23

autoboy, post: 314182
I gotta say that I'm impressed with the game. It really does play just like Halo 2, but that is not a bad thing. The LFE is really pretty impressive on my SVS PB12 NSD.

There is one thing I am disapointed in, and that is the jaggies. I had to double check to make sure I hadn't set the resolution to 1080i last time I traveled with my xbox. I was playing on a 56" 720P samsung DLP from 8-10 and the jaggies were really bothersome. Oh well, I'm sure after a few more days I'll get used to it.

Would you like your game to run at 60fps or 30fps?

You're going to get jaggies on consoles, anti-aliasing requires a lot of gpu power to pull off.

autoboy, post: 314182
I gotta say that I'm impressed with the game. It really does play just like Halo 2, but that is not a bad thing. The LFE is really pretty impressive on my SVS PB12 NSD.

There is one thing I am disapointed in, and that is the jaggies. I had to double check to make sure I hadn't set the resolution to 1080i last time I traveled with my xbox. I was playing on a 56" 720P samsung DLP from 8-10 and the jaggies were really bothersome. Oh well, I'm sure after a few more days I'll get used to it.