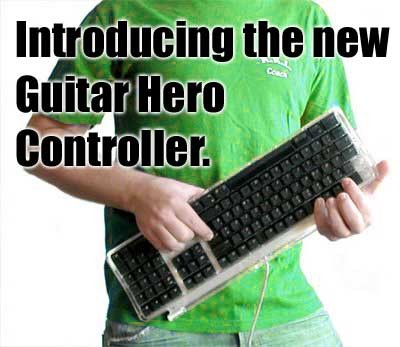 The lawsuits could result in new controllers

When it rains it pours. The preemptive lawsuit filed by Activision, maker of Guitar Hero, over Gibson's patent dispute has taken a turn for the worse. Gibson Guitar now said that it has filed a lawsuit against MTV networks, Harmonix and Electronic Arts citing patent infringement related to both Rock Band and Guitar Hero video games. Ouch. And this after Activision had already licensed the Gibson guitar extensively for use as a controller.

The lawsuit relates to the same patent which Gibson claims violates a 1999 patent for technology to "simulate a musical performance." It seems everyone will be affected one way or another as Harmonix developed Guitar Hero, was later bought by MTV, Electronic Arts publishes Rock Band, and Activision sells other games in the Guitar Hero series. Oh, what a tangled web we weave.

Harmonix was quoted by Reuters as saying: "This lawsuit is completely without merit and we intend to defend it vigorously." Yeah, no doubt. After receiving a rather strong notification letter, Activision filed a lawsuit asking the U.S. District Court of Central California to declare Gibson's 1999 patent invalid and bar it from seeking damages. Given the fact that Gibson has been a high profile partner in the series, it's hard to fathom where this patent dispute came from. Somebody must have opened up a shoebox and discovered it, realizing that they had some sort of angle and/or claim to the underlying technology.

Perhaps Activision's strongest argument at this point centers around the fact that Gibson has technically granted an "implied license" for any patented technology simply by waiting 3 years to bring up any disputes. Which begs the question: Is there such a thing as squatter's rights for patent infringements?