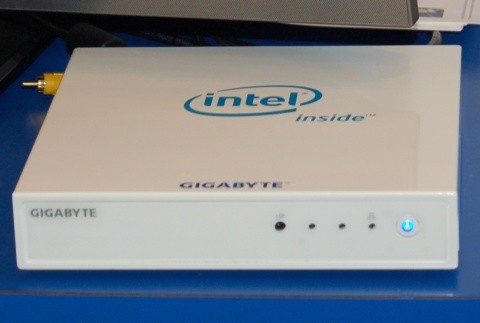 Seamless web-TV content is the goal in a new collaboration between Intel and Adobe. The companies have announced they’re hard at work bringing Flash decoding to your Internet enabled HDTV. Just when you thought display technology couldn’t get any simpler, you’ll soon need to know what firmware revision your HDTV is running. Does your flat screen have Intel inside?

The recent alliance between the companies will bring Adobe’s software to Intel’s new media processor chip dubbed: CE 3100. It’s like a CPU for your display with built-in instructions that’ll make a compatible streaming video format run lighting fast. Enter Intel’s partnership with Adobe. The media processor could show up in TVs, Blu-ray players and many other set-top boxes responsible for bringing Internet content to your HDTV.

Flash has long been the gold standard in Internet video as it’s compatible with some 90% of all computers. The number one competitor in online video is probably an Apple product called Quick Time which has a fraction of the market footprint. It makes sense that for every set-top-box that wants to stream YouTube videos to your HDTV, Flash processing is a must.

Set top boxes of every ilk have been busy thinking up new ways to bring Internet content to your living-room to mixed results. Recently LG just announced a collaboration with Netflix on its new HDTVs. There’s no telling where the media chip could end up.

It’s no secret that internet content on your HDTV is generally lacking. Whether you’re watching streaming video from a set-top-box or the HDTV itself, few living-room solutions are as elegant as a computer at providing streaming online video. That’s likely about to change. A dedicated flash-enabled media processor could put web-video at the press of a button on the remote control.

The companies involved expect to hammer out an on-chip implementation of Adobe Flash Lite by mid 2009. The chips will probably appear in set-top-boxes and HDTVs soon after.