Next iPhone to Have Intel Inside? 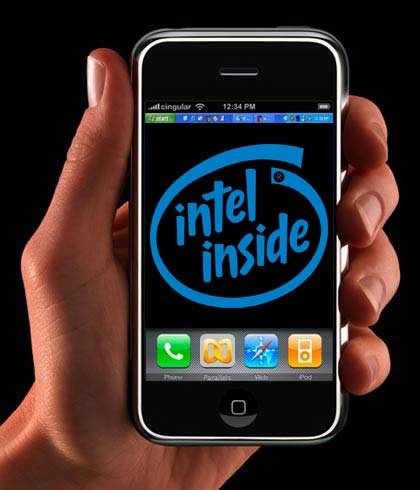 New iPhones to Include Intel Chips?

First we heard from Gizmodo that Intel was working with competitors to take on the iPhone. Now Apple is reportedly considering using Intel's Moorestown mobile Internet device (MID) platform processors to create a new version of the iPhone.

Intel had demoed an iPhone-like device based on the platform, due in 2009, at the latest Intel Developer Forum (info courtesy of Engadget). Like the Samsung ARM processor currently used, Moorestown is a UMCP (ultra-mobile computing platform) system-on-chip design, and will combine processing abilities such as the CPU, graphics, video and memory controller onto a single chip. Moorestown can also support standardized communications capabilities such as Wi-Fi, 3G and WiMAX. This is music to many Apple users' ears.

The Moorestown-based demo showed functionality very similar to Apple's iPhone. The platform is expected to be launched in 2009, while Apple is seriously considering developing a new version iPhone based on the platform. As Apple's current lineup of Macs are based on Intel it's not a huge stretch to think Apple will integrate the tech into future versions of the iPhone.

Some channels vendors think it will lead to the re-shuffling of the mobile Internet device market, and also affect the notebook and mobile equipment market if Apple iPhone uses Intel's platform technology. Others think this just further proof of Apple finally succumbing fully to Intel. It's possible that the iPhone is going to be one of the best showcase for Intel's low-power chips, but only the future will tell how successful this may be for both companies.

Thanks to reader "smile" for the news tip.