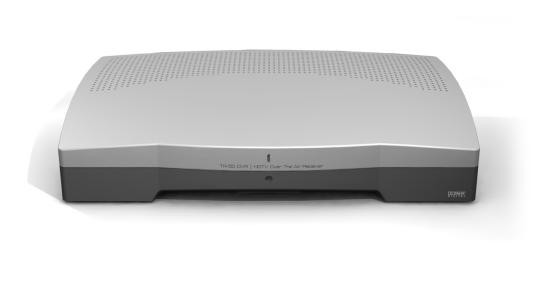 EchoStar made its name in satellite receivers for Dish Network, but the company is doing a good job at reinventing itself as an everyman’s set-top-box company. It recently bought Sling Media, makers of the award winning Slingbox. The company has also just received recognition from CNET, winning its Best of CES in the Home Video category for its TR-50 set-top-box.

The TR-50 is a multi-purpose device that will tune in over-air HD broadcasts, convert them to analog TV and provide you HD/SD DVR for your troubles. It’s the perfect device for anyone who has avoided the call of the cable or satellite guy, and there are a lot of you out there.

If you’re using OTA (over the air) broadcast TV, you might have noticed slim pickings in digital video recorder options. There’s always TiVo for a monthly fee. If you’re lucky enough to live in an area broadcasting uncompressed HD video over air, you’re in on one of the best-kept secrets in video - how good OTA can really be. But recording is still a problem.

EchoStar has answered the call with TR-50 DVR

With dual tuners you can watch and record separate channels, or record two different channels while watching a different recording. It also has the classic DVR rewind and pause capability when you’re just watching TV. If you decide to record a show while you’re watching, it records from the moment you started watching, not just when you hit record. OTA viewers will get all the DVR features that satellite and cable TV users take for granted.

The use of an Ethernet port for Mpeg4 decoding and EchoStar’s promised premium Internet TV looks like it has great potential. But so far, we’ll have to wait till the product ships to see how much online integration EchoStar has learned from Sling Media.

Pricing of EchoStar’s TR-50 DVR will be announced in coming months and the product should hit the streets by July 2008.

admin, post: 356294
The company has also just received recognition from CNET, winning its Best of CES in the Home Video category for its TR-50 set-top-box..

I like the fact they made an update to all the firmware, that allows one to connect to cat5 cable over the net.. instead of phone lines…
Hi Ho posts on January 12, 2008 16:01

I have the 622 in my bedroom, and upgrading my Great Room theater to the 722 was a no brainer… Seriously it is a great DVR…. The scalers in Dish's HD receivers are awesome… !!

I have to agree there too. SD TV looks great even though most everything I watch is available in HD on Dish.

Another awsome feature is the fact that it has an OTA tuner built in and it allows me to get my local Fox affiliate in HD and I can record three things at once.
raymondy posts on January 12, 2008 15:38

Wayde Robson, post: 356617
I think it's partly because it's multipurpose, converting to analog TV perhaps? or becuse it fills such a needed niche of giving PVR to OTA, which I guess is very underserved at this time.

Then offering online contnet and Mpeg4 reading to your TV from computer or online, this has great potential.