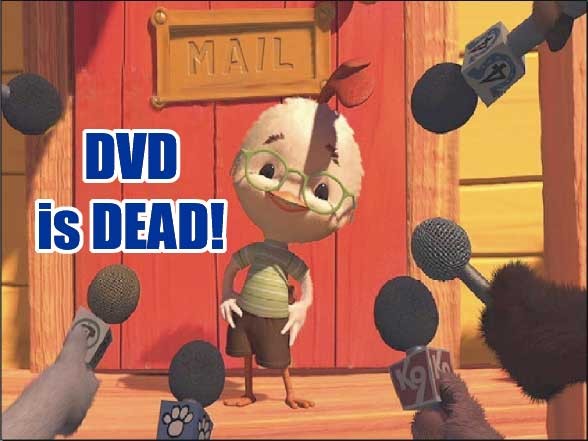 Now that the high-definition disc format war is over, there is a lot of speculation about what exactly will happen next. Will Blu-ray players drop in price enough to really motivate consumers to get on board? Will the studios get behind those who would make downloadable content the new media? Will digital cable and satellite pave the way for high definition content direct to consumers' homes? Or, as John Cox, President of Xperinet Inc boldly predicts, will the DVD be dead in 18 months.

We've heard some bold claims in our time, but never one so... well, inherently, ignorantly wrong. Here's the quote in context:

"The DVD will be dead in 18 months," predicted John T. Cox, President and CEO of Xperinet. "Now that the format war has been resolved, the Studios are chomping at the bit to implement another wholesale format change. This means big money for them, as consumers start replacing their DVD libraries with Blu-ray."

Dead is a strong word. Dead implies a dearth of sales. Dead puts forth images of a failed format and rapidly shrinking consumer base to sustain sales of the format.

While some out there wish Blu-ray were the quick replacement of DVD, a country only just getting itself into the full throes of high definition television isn't going to throw out their DVD players and flock to Blu-ray. Not yet.

Nielsen released a 2007-inclusive report which found that only 13.7% of TV households in the United States (roughly 15.5 million out of 112.8 million total U.S. TV households) are equipped with HD televisions and HD tuners capable of receiving HDTV signals, a status Nielsen described as “HD Capable.”

Remember that many consumers believe they have HDTV when they in fact, need to understand how to get HDTV signals on their new television. With this in mind, the country is largely still watching standard definition content. And DVD penetration is over 80%. This effectively means that if you have a phone or a television, you probably have DVD.

Now we can understand how a company that wants to sell consumers media servers and clients would love to see all of the content in HD. Right now that means Blu-ray for media-based movie content. But don't think for a minute that wanting something to be true means it will happen any faster than history tells us. This is the biggest foot-in-mouth example I've seen in years. And it gets worse:

"The transition from DVD to Blu-ray represents the biggest quality improvement of any media change to date," continued Cox. "It's a difference you can really see, and once accustomed to it, anything less is unwatchable." Xperinet believes this dramatic step in picture quality will drive the 30 million households in America who own High Definition televisions to rapidly move on replacing their existing libraries of DVDs.

I guess we just redefined the "death" of DVD by saying that if 30 million houses who have HDTV dump their DVD players then the other 250+ million homes with DVD players will be forced to follow suit. Not without two very important things occurring:

The release continues to make the P[resident of Xperinet look even more foolish:

"We anticipate Studios will begin publishing new movies on exclusively on Blu-ray as early as Christmas of this year, and will use the broadcast transition to HD as a justification for the move," continued Cox. "This will prove a boon for Blu-ray player manufacturers, as hold-out DVD customers are forced to upgrade. We expect by the fall of 2009, DVDs will rapidly disappear from retail stores, just as LPs did in 1987."

Utter hogwash. They then go on to pimp their media servers and how support for Blu-ray makes them better than the competition. It all comes down to a blatant scare tactic designed to convince anyone looking to purchase a media server-client solution that DVDs are quickly going away and that their company is therefore superior.

Our advice: Don't burn your DVD players just yet. There's a much longer and more flexible transition period coming in the next few years.

Read the Complete Thread
aarond posts on March 04, 2008 20:45
DVD came to the U.S. March of 1997, the week of June 15 2003 was the first time that prerecorded DVDs outsold VHS in the U.S. 2006 was when major studios stopped releasing new titles in VHS. I don't see any way that the transition to blu will be any faster. If picture quality is the reason does anybody remember D-VHS? Its going to be a long time untill DVDs disappear from the shelves of your local walmart
BMXTRIX posts on March 04, 2008 20:38

Jack Hammer, post: 383609
You did a much better job of stating what I feel and was poking at. Except for the word eventuality, I'm just not 100% confident that BD won't go the way of SACD. Or that by the time the general consumer is ready to embrace it, there won't be something better available or on the horizon that renders it obsolete.

I think portable music is an eventuality - but great sounding music is not.

HDTV is in that same category - it's an eventuality. People aren't pushing for portable video en' masse, they are pushing for better video… and are being marketed HDTV above all else.

Now, could something better come along? Absolutely! But, there is still a fair bit of debate whether or not it will be physical, or if it will matter. That is, 1080p video is about all the consumer can handle, and it is the current level the market is finally hitting. Not that consumers, stupid as most are, won't be excited about, and buy 2160p video - they just won't see any improvement with it.

So, will there be better? Yes, I think there will be.

But, I think Blu-ray represents what may be the last step in physical media perhaps forever. Maybe not. I happily will admit my stupidity on the future. But, with how much people talk about HDDL, it is hard to imagine that a new physical media will come along to replace DVD or Blu-ray in 5 years. It's also hard to imagine that people will be willing to give up physical ownership of discs the way they would for CDs. People didn't really give up CDs though, as they still sell, it's just that downloads gives them just the songs they want without buying an entire album - and keeps it portable.

Downloads does not represent an improvement in video, nor an improvement to the buying and ownership process, so physical media may still dominate for movie ownership - even if I (strongly) believe that the rental market will be owned by the download process.

But, there is no question to me that DVD is the only really serious obstacle for Blu-ray at this point and in 18 months (3 years in) we will just start to be seeing what the real potential of Blu-ray is.

Not sure how many people here bought players that were sold as SACD players - or DVD-A players before they were DVD or CD players. This is the fine difference - Blu-ray is sold as Blu-ray and HD first - DVD second… If it continues that way, then I do believe it could emerge as the dominant format.
yettitheman posts on March 04, 2008 18:10
18 months DVD will be dead like Vinyl in 1987??? Uh… vinyl is still around (just not in mass).

DVD won't be going anywhere soon… considering some movies can be had for $5 at Wal-Mart, and most people I know have DVD players.

DVD is still cheaper to make, has more user base and is standardized for the most part. BD is a new upcoming standard to contend with (yes I know it does exist, but it just won the format war with Toshiba) and isn't penetrated enough in the market to have sway for DVD.

As long as DVD has been around and considering it will probably take 3-5 years or longer with the economy, solid DVD upconversion will play a big part in BD if it want's to get a larger market share (although I haven't seen a BD player that won't upconvert DVD) as well as pricing. The HD-A2 proved the point of the $98 HD player that average people will buy, even if they may not know how to use it to it's full potential. What may be nice, but unknowingly positive or negitive, is to make a BD player with a way of becoming a desktop like computer. We know that the audio part is there, we know that the video processing is there, who's to say that they can't incorporate a computer of sorts for web browsing, or email, or just to run simple applications? It's very do-able, but the expenses may be too great for companies and the consumer, as well as the consumer seeing no value in that addition.

However, BD is king as far as technical superiority (even though there are other technologies out there, but I'm trying to remain in scope with consumer products that are out now), and DVD is king as install bases go.

Eventually, DVD will go away sometime, but not anywhere soon at all. I give it 20 or so years. If the computer technology market is anything like the HD in respects to faster parts and larger storage capacity accesibility, then BD will be history in 5-10 years. However, consumer products have held longer, steadier positions in the market that computers.
Johnd posts on March 04, 2008 15:39

westcott, post: 383912
I think you make a very valid point that many may overlook. Technologies are being developed at such rapid rates and the improvements in codependent technologies can affect the success of many of them.

I too believe that there will be something MUCH better than the marginal improvement of BluRay over DVD. Only time will tell what that will be!!

I hear what you're saying, but you have to admit that the term “marginal improvement” is a hugely relative term.

I would not very much appreciate the difference between HD and SD on a 27“ screen at ten feet. I have to say, at twelve feet from a 100” screen, the pq improvement is well worth it.

Same thing for audio. Not a huge difference on a crt's stereo speakers, but True on a nice set of well-placed speakers (with a nice soundtrack) is appreciable to my ears.

Jack Hammer, post: 383609
You did a much better job of stating what I feel and was poking at. Except for the word eventuality, I'm just not 100% confident that BD won't go the way of SACD. Or that by the time the general consumer is ready to embrace it, there won't be something better available or on the horizon that renders it obsolete.

I think you make a very valid point that many may overlook. Technologies are being developed at such rapid rates and the improvements in codependent technologies can affect the success of many of them.

I too believe that there will be something MUCH better than the marginal improvement of BluRay over DVD. Only time will tell what that will be!!
Post Reply