Are You Sure You're Watching HDTV? 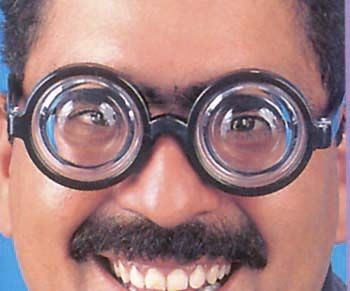 Are You Sure You're Watching HDTV?

That's right. You bought a new high definition television at your favorite big box store. You brought it home or had it delivered. You connected it up just right and made sure you had all the right cables (and boy did THEY cost a pretty penny). But do you have HDTV? Do you? You do? Are you SURE?

A recent survey by Leichtman Research Group came up with the following interesting facts:

These are some big numbers, people, and they are representative of a consumer base that is constantly marketed to by fancy commercials and sales pressure from electronics retailers. Consumers are assaulted with beautiful, alluring pictures when they shop for 2-gallon mayonnaise jars at the local big box store, nearly blinded by rows and rows of televisions as they walk down the aisles.

This is big business, and the CE (Consumer Electronics) industry is in full force trying to make consumers understand that they NEED high definition televisions.

But that's where the CE industry's "education" stops and the consumer confusion begins. You see, THEY think they only need the box to get HDTV. And that's just not correct.

So let's try and pick up the education process, in the hopes that the rest of the industry will follow suit. You may already know what it takes to get real HDTV, but does your Mom? Does your Uncle? Spread the word. Educate and inform - and in so doing you will make the spread of REAL high definition so much easier and more effective for consumers everywhere. We're going to start with a simple list of 5 facts everyone needs to know about HDTV (High Definition Television):

1. Sleeping in the Garage Doesn't Make You a Car

I know, you just spent $2000 on a gigantic big screen television and it has all the bells and whistles you could ever want. In fact, it's fully HD and it has the resolution to process it. But that doesn't mean when you plug it in you're getting HDTV. In fact, it's very possible that when you get home television may actually look WORSE than your old non HD display! Worse ??? That's right, when you get home you may find that your cableTV signal will often look more pixilated, grainy and downright nasty. Here are some reasons why:

An HDTV doesn't magically turn all sources into high definition. What you saw at the store - that was most likely (if it impressed you) a high definition source. What's a high definition source? It's any signal that is broadcast, sent, transferred, or otherwise conveyed at what's known as either 720p, 1080i or 1080p resolutions. When you plug that cable, dish or antenna signal into the new HDTV it doesn't magically convert the SOURCE of that signal into high definition. It WILL scale that signal to the native pixel resolution of the display, but that's not the same. For example, if you take that "diamond dust" engagement ring and stick it right up close to your girlfriend's eye it looks great, but back it up a bit and you'll find what you really need is a bigger diamond or a ride home.

HDTV is the same way. Without a true high definition source, that expensive display is just stretching a smaller image to fit it's enormous girth. All the cool resolution you paid for (it IS paid for, isn't it?) is going unused. High definition televisions (HDTVs) NEED a high definition signal.

So how do we get HD material into the television? It's not that hard. Here are some ways:

3. Your CableTV or Satellite Installer May Not Have a College Degree

I'm probably going to get my butt walloped for this one, but I've run into far too many ignorant cableTV installers to ignore the possibility that after following steps 1 and 2 you may still not have HDTV. There are a few "watch signs" to look out for or note that will save you from becoming one of those consumers who pays for HD service only to end up watching standard definition:

OK. You've got the HDTV. You've got the HD cable or satellite box. You're connected properly. Why doesn't everything look better? Sigh... Welcome to the sad reality of HDTV. While you are a member of an elite society (becoming welcomingly less elite each year) most of the industry is NOT. Most broadcast television is about profits, and it's very hard to make profits when you are upgrading every aspect of your show to high definition. Cameras. Editing devices. Broadcast equipment. Satellite feeds. It is no small matter to take a standard definition show and make it HD. As a result, you will find that much of prime time network television has gone HD (yeah!) but almost all of daytime television, cable channels and even prime time news remains in standard definition (boo!) What's a person to do? You do what any rational person who is into HDTV does. You complain. Write letters. Tell the Sci-Fi Channel to get a clue or you'll start watching reruns of Gilligan's Island and The Twilight Zone on FX. And most importantly, learn to love DiscoveryHD. It's the best HD channel in most markets and some (most?) of the programming is absolutely gorgeous and mesmerizing. I'll even watch American Chopper - yeah, it's that good.

5. I Didn't Know Katie Couric Was So Fat!

Yes, I'm picking on Katie Couric, but that's just because I can. The final thing about having HDTV is that you're going to have to learn the art of bouncing back and forth between standard definition content and high definition content. This really isn't an issue, except that standard definition content is in an aspect ratio of 4:3 and HDTV is in 16:9 (widescreen). As a result, it is very possible that you will need to adjust the "aspect ratio", "wide" or "screen size" setting on your display depending upon what type of programming you are watching. This isn't a big deal, but please read our article on aspect ratios in order to get more acclimated on what you may need to know about the various types of material you may view.

No, we're not taking sides in the doomed format war, but it's important to know the difference between a DVD player, an upscaling DVD player, and a high definition DVD player. Here's a quick breakdown of what they are and why you should care:

So have you learned anything? I hope so. At the very least I hope you go spread the word about HD - real HD. Make sure your family, friends and neighbors who have purchased HDTVs are truly getting an HD signal.

If not, then steal their televisions and replace them with framed pictures of Katie Couric when they aren't looking - they probably won't notice.

Discuss This Article
NapaDRB posts on August 09, 2007 17:27
You would think if your job title is “cable installer” that you might actually be trained in installing cable.

I don't know about the rest of the country but in my area (Northern California) most of the installers are “independent contractors” and get paid flat rate. So they get $75.00 or whatever per install, I'm sure this doesn't help matters any. I know a person who is an actual employee of Comcast and his job is to follow behind all these guys and clean up their mess.

I too have straightened out many a comcast install. After having my first HD box installed by Comcast and arguing with the installer about connections, etc. (I finally gave up, let him do it his way, and then took it all apart when he left and hooked it up correctly) I now just go straight to their office and pickup the box and install myself
westcott posts on August 09, 2007 08:46
I think this discussion is somewhat wasted on the 25 to 33% of the people who own HD tvs but do not have an HD signal. If I were not so lazy, I would dig up the Audioholic article on just how many people just have to have that big HD display but do not even bother to get HD service.

Frock7, post: 293899
There's a very simple way to fix all of this confusion.
Put some LEDs on the front panel of the display that light up based on the incoming signal. If the HD LED lights then you have a HD source. Are the HD display makers trying to hide something?!?!
Better living through better design.

That's actually not a bad idea but I agree with aversfi that I personally wouldn't want another LED.

Most TVs do have a feature that shows the channel information and one of the pieces of information is the resolution of the incoming signal. If you are familiar with HDTV resolutions that is enough to know if you are getting a HD signal. Of course most non-technical/non-HDTV enthusiasts still wouldn't know the signal was HD even if it said 720p or 1080i in big giant letters.
avaserfi posts on August 08, 2007 20:44

Frock7, post: 293899
There's a very simple way to fix all of this confusion.
Put some LEDs on the front panel of the display that light up based on the incoming signal. If the HD LED lights then you have a HD source. Are the HD display makers trying to hide something?!?!
Better living through better design.

Apparently being an informed consumer is just asking too much so everything must be dumbed down. Personally, I wouldn't want another light, even if it is only an LED, annoying me during my movie experiences. Besides what if the owner doesn't read the user manual and isn't told what that light means, they could just go on not watching HD without ever knowing about the feature.
Frock7 posts on August 08, 2007 20:41
Why “AREN'T” we sure we're watching HDTV?

There's a very simple way to fix all of this confusion.
Put some LEDs on the front panel of the display that light up based on the incoming signal. If the HD LED lights then you have a HD source. Are the HD display makers trying to hide something?!?!
Better living through better design.
Post Reply
See also:
About the author: