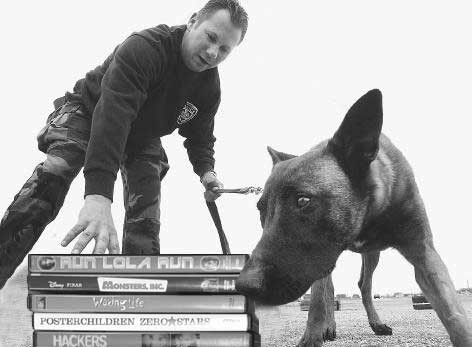 According to an AP report issued today, Malaysian authorities hope two specially trained dogs will help police sniff out pirated DVDs and clean up the country's tarnished reputation as an abuser of intellectual property rights. Two male Labradors from Northern Ireland, named Paddy and Manny (of course) and trained to smell chemicals used in DVD production, will become the world's first permanent canine national anti-piracy unit when they go into action next month.

Since the dogs can't actually distinguish between real and pirated DVDs, what they do is point officers to hidden caches of discs. Lovely. Let's hope the MPAA doesn't start putting them in shopping malls and airports.

Mohamad Roslan Mahayuddin, the ministry's "enforcement director", told reporters Monday he hopes the dogs will help get Malaysia off the U.S. watch list of countries that thumb their noses at intellectual property rights.

The country decided to establish the DVD-sniffing squad after a visit last year by a similar team from the Motion Picture Association (MPAA). Apparently, the visiting dogs helped authorities unearth 1.6 million pirated DVDs and other optical discs and equipment worth $6 million over six months.

U.S. studios that are members of the association claim to have lost $6.1 billion to worldwide piracy in 2005, including $1.2 billion worth origination in Asia and the Pacific region. These types of numbers are why it's so hard to fathom how the RIAA views its domestic racketeering (er, settlement) cases as being effective in curbing piracy.

The two $12,000 dogs were given to the country by the MPAA and are scheduled to start work in April after getting used to their new handlers and the tropical climate. Sounds like a happy ending... Of course movie pirates reportedly placed a hit out on the last pair of dogs to the tune of $29,000. Let's hope the two new Irish detectives don't suffer the same fate.

Of course movie pirates reportedly placed a hit out on the last pair of dogs to the tune of $29,000. Let's hope the two new Irish detectives don't suffer the same fate.

Perhaps the MPAA should just ask nicely, and then perhaps the pirates will come out of the woodwork voluntarily. Yeah…that's the ticket.
GlocksRock posts on March 04, 2008 08:36
I think this is taking it a bit too far.
Post Reply