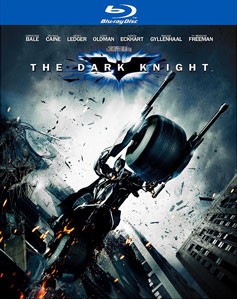 Warner’s upcoming Batman: The Dark Knight Blu-ray disc will feature several firsts in BD-Live interactive features. The disc’s content will reportedly let you create and distribute your own picture-in-picture commentary.

Next week’s release of Dark Knight on Blu-ray and DVD is widely expected to set first-day sales records. Sure, the studio could have kicked back and let the film rake in sales on its own box-office merit. But instead Warner is going all out for this release. The upcoming Blu-ray disc will push the envelope on BD-Live interactive features by turning them into more of an online community.

“My WB Commentary” will let Bonus View Blu-ray machines playback a commentary you record yourself with a webcam. The secondary visual commentary will appear in the sub-picture while you watch The Dark Knight. You’ll then be able to share your commentary online. But The Dark Knight interaction doesn’t stop there.

“My Community Screening” is Warner’s stab an online community movie viewings. It’s an interesting feature for which I cannot think of a precedent. HighDefDigest.com reports that you’ll be able to watch the movie with friends in real time. Complete with interactive chat so you can make your own sarcastic comments through the PnP window.

The only thing missing is the ability to reach through the sub-picture and play a quick game of hide-the-pen with your neighbor.

Warner has designs on hosting lofty My Community Screening sessions where they’ll invite director Christopher Nolan to sit down with fans for a viewing of the movie. Fans will apparently be able to ask Nolan questions where he’ll respond in real time over BD-Live. Good luck with that!

The Blu-ray disc also features a full length movie called Batman: The Dark Knight! So, the less-21st Century among you can kick back in your easy chair and actually watch the movie, just like your grandpa used to.

Get ready for The Dark Knight folks - it’s only scant days away. The Blu-ray disc is arriving at stores next Tuesday December 9, appearing your choice of a standard two-disc set for $35.99 or the collectible limited edition for $64.99.

Read the Complete Thread
Wayde Robson posts on December 05, 2008 07:42
You mean you guys don't watch movie while tapping away at a cell-phone sms-ing friends that you're … watching a movie? How quaint.

I can see the kind of people this would appeal to and it sure ain't me. The one about asking questions to Nolan is a real gem. God, can you imagine what an awful experience that would be?

Nolan: Blimey, I thought the bloke was real cabbage and rice, that's why I made the movie.
Sheep posts on December 04, 2008 20:40
Why would you want to do anything other then watch a movie, when you're watching a movie?

Maybe it's just me, but all these BD live features seem totally pointless to me. Why would I want to watch a movie while chatting with someone online?

Maybe it's just me, but all these BD live features seem totally pointless to me. Why would I want to watch a movie while chatting with someone online?
Post Reply