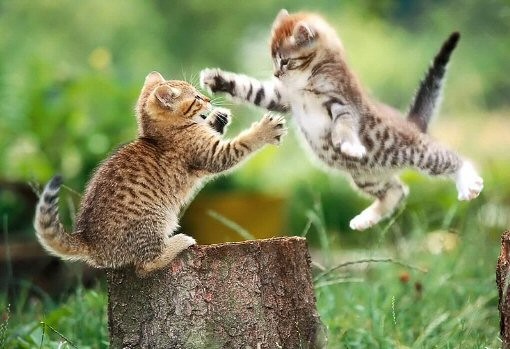 It's an HD world, but who will win?

My HD looks better! No it doesn't, mine does! That's about the tone of last year's scuffle between Comcast and DirecTV over which company had the better looking high-definition channels. HD was used as a vehicle for comparison over the two companies as early adopters of the technology and partakers in the massive sales of high-definition products flooded the markets.

At one point Comcast made a statement about how two out of three survey respondents said Comcast's HD looked better than satellite... a statement that would have to be so qualified and defined as to have zero impact on anyone who understood the issues involved - in either surveys or high-definition. Unfortunately, most consumers are proficient in neither. DirecTV almost immediately decried the ads as false advertising and began looking into the matter, finally filing a lawsuit to stop them last Spring. It looks like an undisclosed settlement has occurred, however since Comcast is still allowed to cite the survey - our guess is that DirecTV got itself slapped down unofficially. All this really indicates is that it was a big waste of time and money - but the lawyers are likely very pleased with the results.

The battle over bringing high-definition to consumers is not, unfortunately going to boil down to quality. Quality is an issue, but only so far as to be dealt with on a level that avoids service cancellations. The real issue will be the amount of content. Be it channels or actual content itself (movies, TV shows, etc), what people can view on TV will trump how they view it every time.

Currently satellite is in a ridiculous lead over Cable. And CableTV seems to be (slowly) gearing up for IPTV and switched digital video, though neither of these appears to be in the works for the next two years on a massive (and successful) scale. As pressure mounts it will be very interesting to see how fast CableTV can get its act together. All the lawsuits in the world won't save them if satellite continues to add HD channels uncontested.

Read the Complete Thread
agabriel posts on December 29, 2007 18:13
All codecs will vary the signal and may introduce some loss depending on the implemented algorithm. It is still a digital signal so you will either get what is distributed post algorithm or you won't, there is no in between. The losses that were tolerable with analog (leading to snow) are not tolerable with digital; which is the core of my point. You will either get what the company is sending you or you won't.

Also, depending on the processing power of the cable/sat box there are so many algorithms available to encode the data. I used a simple algorithm with an image acquistion application (running at 160 Hz) and I was able to lossly reduce the data load by up to 500% in real time. I'm sure the cable/sat companies spend a lot more time than I had to come up with new algorithms that creatively sqeeze alot of data into a small pipe.

Designing a codec is a series of trade-offs with questions like how much loss is tolerable before its noticed and then how can it be reduced. For instance the human eye can only distinguish 32 different colors from a pallette at any given time, I think they would be foolish not to use a keyed lookup table based on that, and I'm sure they do. Do they bias the algorithm to compress temporally or spatially (I'm sure they use a compression with loss); I would rather have a slight delay than a blury football. How is the sound encoded, do they send a video frame with audio multilexed in, or do they attach audio as header somewhere. As long as the box can decode what is put in does it matter? Also, at this point doesn't it become a conversation as to which algorithms do you prefer? I also wonder how many of the codecs are used by both cable & sat companies.

agabriel, post: 348732
Sure, but all being equal or at least similar my point stands.

Not really. My point was that they do not compress equally or even use the same CODECs. Satellite isn't even consistent from channel to channel.
cmusic posts on December 28, 2007 15:51

Clint DeBoer, post: 348605
Actually it's all in the resulting bitrate and how well it is encoded on the front-end.

I work for a telephone/ISP/TV cable company with FTTH service. Our bandwidth on HD channels go up to about 19 meg. We've checked Dish HD bandwidths (thanks to some Scientific Atlanta techs and their equipment helping us install our head end) and found most of their HD channels have about a 13-14 meg bandwidth. The SA techs say that Dish and Direct TV compress their channels to save on the bandwith going through the satellites. We've had several customers that switched from both Dish and Direct TV HD service to ours and say the same channels look better over our FTTH plant.
agabriel posts on December 28, 2007 12:54

Clint DeBoer, post: 348605
Actually it's all in the resulting bitrate and how well it is encoded on the front-end.

agabriel
its digital, it doesn't matter, the signal doesn't degrade like an analog signal.