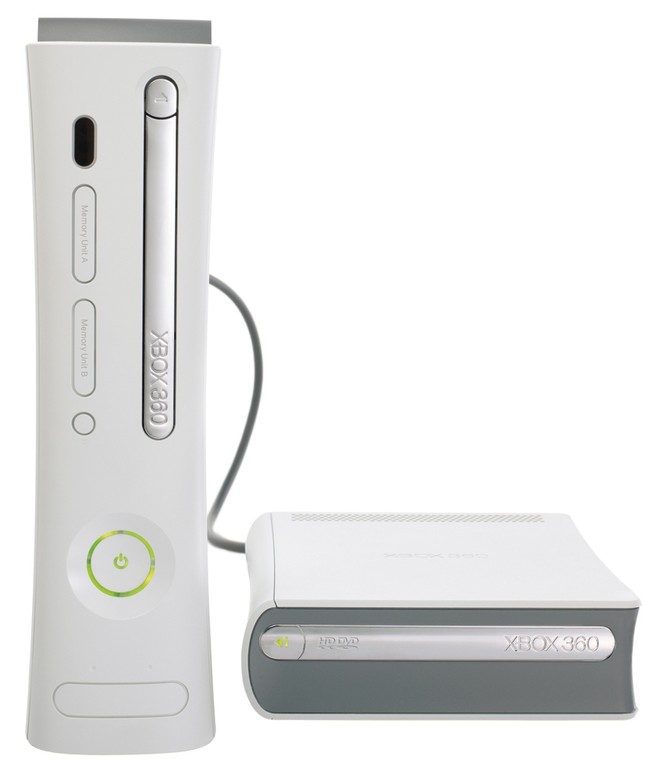 Just days after Microsoft exec Steve Ballmer alluded to a Blu-ray device for Xbox 360, the rumor was quashed. Yesterday Aaron Greenberg, group product manager of Xbox 360 reaffirmed his team’s commitment to high-def movie downloads instead of a high-def disc format.

The message from Greenberg is clear: Microsoft Corp has no plan to release a Blu-ray player add-on for its game console.

“Xbox is not currently in talks with Sony or the Blu-ray Association to integrate Blu-ray into the Xbox experience,” Aaron Greenberg told Reuters in an interview on Wednesday.

Comments from Steve Ballmer earlier this week lead many to believe the Blu-ray add-on was imminent. But like he said at the Mix08 conference, Microsoft’s connection to Blu-ray so far is only in the form of device drivers for its Home Theater operating systems.

In Ballmer’s quote he said “…we’ll support Blu-ray in ways that make sense.” But it doesn’t make sense for Xbox 360 to jump the Blu-ray bandwagon at this time.

The Speculation started when news website, SmartHouse.com published a story alleging insider leaks at Microsoft about a prototype Blu-ray add-on. Despite the frenzied speculation all over the web - Audioholics correctly identified it as a link-bait story with little or no fact to back it up.

Microsoft has little reason to make an add-on for Blu-ray. Unlike its competitor PS3, Xbox 360 games don’t rely on the format. Until the general public shows overwhelming support for Blu-ray there is little profit to be gained.

Perhaps in a few years Microsoft’s next generation Xbox will sport an internal Blu-ray drive. By then in-game graphics are likely to be so storage hungry they’ll use up more than 25GB. And by then the movie-discs may have already caught the fancy of the mainstream, making Blu-ray a profitable no-brainer move for Microsoft.

But until then – don’t hold your breath.

mikeyj92, post: 388077
I agree GlocksRock. Eventually, MS will HAVE to implement a BD drive, either in a 360 Add-on (I highly doubt this will happen), or in the next console they come out with.

They are already running into space issues as I believe MLB 2K7 on the 360 had some things put on the marketplace to DL for free that came on the PS3 version of the disc…I have not confirmed this, only read it on a few boards.

I posted it somewhere but one of the heads at Rockstar mentioned that because A: dvd's have less capacity and B: not all 360's have hard drives, they were actually having some serious hold-ups in developing the Xbox360 version of GTA IV.
Alamar posts on March 14, 2008 18:35
I see no current talks with the Blu group to add a Blu player to the 360 to be no great loss.

Movie playback on the XBox systems has historically been pretty bad so there's no reason to expect it would get better with Blu.

As far as data capacity for games I don't think that they should just change the spec … they are stuck as far as this generation of consoles goes.

As far as the future goes MS didn't indicate that they'd never talk to the Blu people … they just aren't doing it right now.

As for the 720 device it's likely too early to start worrying too much about it.
j_garcia posts on March 14, 2008 17:11
Isn't necessary, but it would make things a lot easier on them…. Plus we are talking about the 360, not the next generation. They WILL have to do something for the next gen, but it doesn't necessarily have to be BD.

They CAN do it with DVD, they will just have to include more discs
Pyrrho posts on March 14, 2008 16:58
Those of you who say that they need to eventually add Blu-Ray capability are simply wrong. If they need additional information beyond DVD's capability on an optical disc for their gaming system, they can use another format. My guess is that they could probably get the rights to use something akin to HD-DVD very cheaply. Or they could put in an entirely new system. Or, since they are interested in downloading HD movies, they could have it such that the extra data is online, not on the disc itself. Blu-Ray is absolutely not necessary in their gaming system.

And, as mentioned in the article, they might add Blu-Ray at some point in the future, if they think it is a good idea at the time. So, it may or may not be a part of a future version of their system.
GlocksRock posts on March 14, 2008 13:57
I am hearing that MGS4 for the PS3 is using a 50 gig Blu ray disc, and they are already running out of room on it. If games continue at this pace, there is no way MS will be able to not put one in their next console, they need the space.
Post Reply