Blu-ray Awareness on the Rise 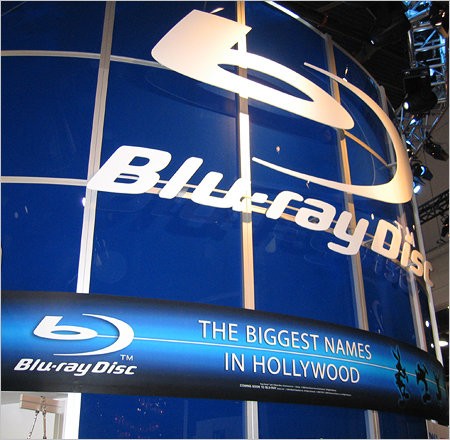 According to a study from Interpret, a media research company, in just two years around 60% of U.S. households now know what a Blu-ray disc is. At the same time it is being reported that the number of households with a high-definition disc player has passed the 10 million mark.

The survey, which included consumers ages 18-54 was conducted just after Warner Home Video exclusively endorsed Blu-ray and before Toshiba pulled its HD DVD format out of the running. The survey showed that men, ages 18-34, had over a 75% "awareness" of Blu-ray. Awareness, however belies the true goal of all Blu-ray manufacturers and studio supporters - getting people to adopt the new format over DVD and purchase players for their home. In order to see this hit critical mass, three things must happen:

Blu-ray is definitely picking up steam, however these challenges put a lot in front of the format, whose debut is often - erroneously, we feel - compared to DVD. The 10 million player mark, assuming one player per household, nets a 9% penetration figure. Contrasted against the 91% penetration of DVD, this indicates an uphill climb for Blu-ray that will be won only by a slow, steady, and concerted industry-wide effort that would need to outlive, out-value, and outperform other available options. Since the industry currently views this as a "quality" enhancement, and not merely a way to get a robustly-protected disc content format out that avoids some of the perils of unprotected DVDs, the technology and software is quite possibly going to remain higher in price for quite some time.

The biggest aid to the Blu-ray movement is quite possibly the digital transition of 2009, which will see at least a moderately-sized movement of people towards HDTV, since an upgrade will be seen as inevitably good to capture HDTV and digital TV signals.

Read the Complete Thread
Shadow_Ferret posts on April 15, 2008 16:10
We didn't get our first DVD player until we bought our son his X-Box and that was a a year or so after it was released. So 2002?

It's still our primary DVD player.

I have no intention of jumping on Blu-Ray, we don't even have any HDTVs yet and don't plan on buying any in the near future until they become affordable, which to me is what you'd pay for a 32" CRT screen tv now, much less than $500.

I see no benefit to Blu-Ray or HDTV and am perfectly happy with just normal DVDs.

But then, I'm one of those consumers who is sick and tired of buying into the new technology only to have newer technology replace it within a year.
aarond posts on April 07, 2008 18:22

Pyrrho, post: 397517
You appear to think that there was something bad about laserdisc. Consumer laserdisc was introduced in 1978 and was the best home video source until DVD was released in the later half of the 1990's. It never gained a huge following because the players and discs were always expensive. The relatively large discs required much more robust transports than CD, DVD, and Blu-Ray require, which explains why the players were always expensive. But for those who could afford it, it was the best source of movies for home viewing for almost 20 years.

If Blu-Ray is really the next laserdisc, then Blu-Ray has quite a few years left as the best source for the home market.

no i didn't say there was anything wrong with ld I said that it was better but joe and mary sixpack didn't care. ld was a niche product! if you had a big screen and big sound it was the only way to go. anyone ever watch vhs on a 50" rpcrt?
Pyrrho posts on April 06, 2008 13:51

obscbyclouds, post: 397521
Speaking of VHS vs. DVD, I came across an interesting article Circa 2001, regarding the new fangled DVD thing.


Check it out, you'll probably enjoy it, I know I did!

There are always Luddites who object to new technology, and imagine that it is worse than the old stuff. The person who wrote that article quite simply does not know what he or she was writing about. To avoid troublesome discussions of what is “better” and what is “worse”, I will give an example that is a simple matter of fact. DVDs do not all have only compressed digital audio, as the article claims. Some have uncompressed stereo PCM soundtracks on them. I own several like that. If he or she really knew about the DVD format, he or she would know that the DVD standard requires at least one soundtrack that is DD or PCM. But knowledge of a subject is not a requirement for someone to write articles, as is evidenced by that one (you can also find articles claiming that the world is flat and that people never went to the moon; just do a quick search for the Flat Earth Society and moon landing hoax and you will find plenty of other BS). It is also nonsense to suggest that one can only detect the difference between sounds coming from 4 places at once. I guess that person has never been outside with sounds coming from multiple directions at once.

But, to be fair, there are always those who imagine that everything new must be better. The truth is, sometimes new things are better, and sometimes they are worse. Sometimes new things are better in some ways, and worse in others. Blu-Ray, in its current state, clearly falls into this latter category: great picture, when it works, but plenty of bugs to be worked out.
obscbyclouds posts on April 05, 2008 18:27
Speaking of VHS vs. DVD, I came across an interesting article Circa 2001, regarding the new fangled DVD thing.

BMXTRIX, post: 397412
What's amazing is that in the early days of DVD, with only 480i displays on the market, most of them small, most people did NOT see a dramtic improvement in quality like so many claim. It wasn't really until TVs started going way up in quality and size with more RPTVs on the market that the quality started to really shine.

It was the convenience of DVD which was a huge breakthrough for many, yet it was still years before it became mainstream with DVD as the product.

But, my DVD player doesn't play my old VHS tapes - my Blu-ray player handles the DVDs and Blu-ray discs… Still struggle with the portability, yet distributed audio & video in my home has those bases covered.

Keep in mind, a 27” TV was the same size as a 25" TV, except with squarer corners. That was a very popular size of TV.

Then, of course, there is also the improvement in sound (if one had the necessary equipment to appreciate it, of course).

I do agree, however, that there were other factors that helped encourage people to abandon VHS for DVD, such as the convenience you mention. Given what a DVD can already do, that means that Blu-Ray is likely to be a harder sell than DVD was.
Post Reply