A consumer group charges that Samsung has knowingly sold defective Blu-ray players since June 2006 and is looking for $5 million in compensation.

Samsung sold lead plaintiff Bob McGovern a BD-P1200 last summer which has turned out to be incompatible with some Blu-ray disc titles. The plaintiff attributes the player's inability to playback Blu-ray movies to a "defective design and/or manufacture".

Attorneys have noted that the problems have caused many complaints against Samsung and other Blu-ray manufacturers. According to the suit, Samsung has verified that it doesn’t intend to provide any further firmware updates to fix this issue.

A few specific Blu-ray titles are known to have problems in various players (especially Samsung’s BD-P1000 and BD-P1200) including: The Day After Tomorrow and Fantastic Four: Rise of the Silver Surfer. Many Blu-ray players require regular firmware updates to make them compatible with newer Blu-ray discs.

It’ll come as a surprise to many consumers that simply taking home a Blu-ray player doesn’t mean you can start watching Blu-ray movies. A series of firmware updates are necessary to make the player compatible with newer movies. But what happens when the manufacturer refuses to provide firmware for new movie discs? You get a class action lawsuit against Samsung.

The trouble is probably related to BD+, the DRM (Digital Rights Management) intended to guard against copy protection. Silver Surfer uses a Blu-ray java virtual machine to add BD+ copy protection which is unique to Blu-ray. BD+ is an additional layer of copy protection on top of AACS copy protection already used by both competing formats, Blu-ray and HD DVD. 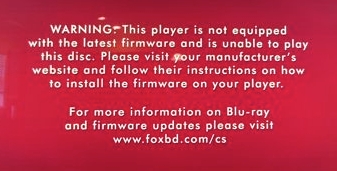 After AACS had been cracked last year, BD+ may have been rushed to appear on various movie discs. BD+ and its endless firmware updates have caused Blu-ray adopters serious aggravation and is a source of even further consumer confusion.

According to ArsTechnica, Paramount sided with HD DVD because its competitor Blu-ray wasn’t “market-ready”. However Steve Feldstein, Fox senior VP of marketing communications says problems with disc compatibility are clearly the manufactures fault.

"…consumers should lobby their hardware manufacturers to release firmware upgrades post haste" and that "the title was well-reviewed and playing well on updated players."

Navigate Samsung’s website and try to find firmware updates for the BD-P1200 or BD-P1000 and you’ll soon experience the frustrations of Samsung's customers.

How does a new high-def technology stand a chance at mainstream consumer acceptance when it doesn’t work out-of-the-box?

Samsung’s older player BD-P1000 and LG's BH100 also has compatibility issues with newer Blu-ray discs. I’ve personally had experience with Samsung’s BD-P1400 and BD-UP5000 and had to get firmware updates for compatibility to Live Free or Die Hard and 3:10 to Yuma. The UP5000 never quite learned how to playback Sunshine and I’m still waiting for a firmware update to fix it.

This could be the first in a series of lawsuits against Blu-ray manufacturers. The finger pointing has already begun between the studios and manufacturers. Perhaps Samsung made itself an easy target by being first to market with a disc player that supports an incomplete format.

Wayde Robson, post: 377688
But to be honest - I've enjoyed writing the format war stories and I'll miss getting worked up over Sony

Don't worry. You'll get your chance sooner or later. Another technology is waiting around the corner and I bet that as capitalist as we are, there will still be sides to choose.
Wayde Robson posts on February 19, 2008 10:31

frostbyte, post: 377615
This site is very much filled with HD fanboys. I have been from the beginning a BD fanboy.

Editorial on Audioholics has focused on the failure of the HD formats due to the war.

I can't disguise my preference for HD DVD but only because of it was first out of the gate in a complete form. And I felt Sony jumped in late because… well, it has that kind of power.

It's just business! I am not a ‘fan’ of a format anymore than I am a fan of a corporation or a building.

I now own a Blu-ray player I am very happy with, the Panasonic DMP-BD30. This one works unlike the many Samsung BD players I've had the displeasure of owning for under a month.

Until I see Sony or Toshiba cheering me on as I pay my bills and start up my car to drive in to work in the morning - I remain objective, impartial and unemotional about the whole thing.

But to be honest - I've enjoyed writing the format war stories and I'll miss getting worked up over Sony
frostbyte posts on February 19, 2008 08:29
This site is very much filled with HD fanboys. I have been from the beginning a BD fanboy. Before HD was even around so I for one am glad it's all over but the fanboy whining. ^_^ There will be some soar people around this site for a while….except those that just want it over and the few BD fans.
Buckeye_Nut posts on February 17, 2008 00:20

I've got some things for ya….


……..how about the ability to watch the vast majority of all fresh new day/date movie releases in high definition

At least Universal and Paramount tosses HD-owners the rare bone every once in a blue moon.
mouettus posts on February 16, 2008 12:39
Wow, never thought of having fanboys whining over this forum. I thought they were all at highdefdigest or avsforum.

To be honest I'm getting sick of John's posts. He's more onto HD-DVD than Toshiba itself. I'm skipping all of his posts. Yeah you got an HD-DVD player and you like it. Then what? Treating another member as “child”. Should be e-slapped somehow by an admin.

After 3 pages, I went like: hey… what's the subject of the thread anyways? I thinks it's dobyblue -vs- Johnd? The winner against Kimbo Slice. Place your bets.
Post Reply