Dolby Partners with Cinemo to Get Atmos into More New Cars 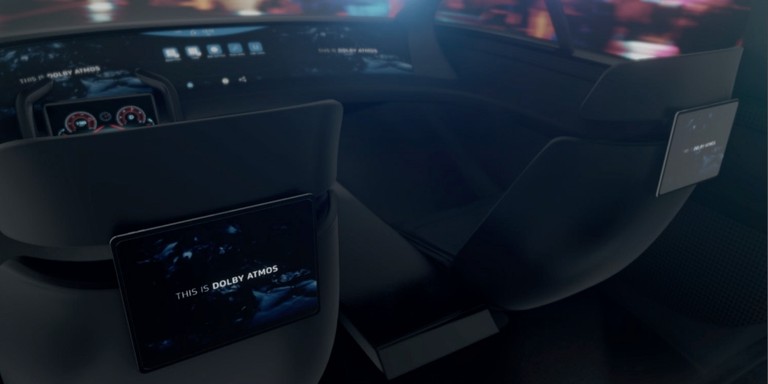 It’s been nearly ten years since Dolby Atmos was first introduced to the cinema-going public, and the technology is now firmly rooted in many parts of the consumer AV industry. What started out as an audio upgrade for your local multiplex soon made its way into dedicated home theaters, faux-Atmos soundbars, Apple AirPods with spatial audio processing, and even laptop computers. Of course, the quality of the Dolby Atmos experience varies enormously across these diverse applications. To hear Atmos at its best, you still need to be surrounded by numerous loudspeakers, including some located overhead. Outside a dedicated theater, there aren’t too many environments in which such a configuration is practical. One space where Atmos could potentially strut its stuff is in the car, and Dolby is apparently itching to make automotive Dolby Atmos a reality for as many people as possible. Most car sound systems already deploy speakers all around the cabin, and adding overhead speakers is certainly doable. Last year, we began to see the potential for Dolby Atmos in the car, starting with a proof-of-concept system demonstrated by Panasonic Automotive and Klipsch at CES 2021. (Since the early 2000s, Panasonic has built excellent automotive sound systems for Acura, tuned by the Grammy-winning producer/engineer Elliot Scheiner.) The first real car to take Dolby Atmos on the road was the Lucid Air Dream Edition ($169,000) a high-end electric car with a 21-speaker sound system that leverages Atmos not only for immersive music playback, but also for innovative safety tech integrated into the car’s infotainment system. Not to be outdone by a newcomer, Mercedes-Benz announced last year that some of its high-end 2022 cars would feature a 31-speaker Burmester sound system with Dolby Atmos integration. The first Mercedes to get the Atmos treatment is the brand’s ultra-luxury Mercedes-Maybach sedan, which costs over $200k when fully loaded.

Dolby has been driving audio innovation for over 50 years and is now bringing an audio revolution to the car with Dolby Atmos Music, an immersive music experience that adds more space, clarity, and depth to audio. Instead of hearing the sound in stereo, Dolby Atmos gives the listener the feeling of being inside the music, as creators are able to strategically place distinctive audio elements into a three-dimensional sound field, offering a fully immersive soundstage.

Designing and building these high-end automotive sound systems from scratch requires a significant investment of both time and money. For a six-figure statement vehicle like the Maybach or the Lucid Air, building a Dolby Atmos system from the ground up might be a sensible expenditure for the manufacturers involved. But if Dolby wants to see Atmos eventually included in the Hondas, Toyotas, and Fords that fill the freeways and parking lots where I live, the bar of entry will need to be lowered. With that in mind, Dolby has announced a collaboration with Cinemo, a leading provider of automotive infotainment middleware, to accelerate the integration of Dolby Atmos into vehicles. Together, the two companies are “set to drive a revolution for in-car entertainment,” according to a recent press release from Dolby. Although Cinemo might not be a household name to you and me, the company provides multimedia playback, streaming, media management, connectivity, and cloud access middleware for a wide variety of car manufacturers, including Chrysler, GM, Honda, Toyota, Porsche, Mercedes, BMW, and even Bugatti. (Middleware is defined as software that provides a bridge between an operating system and other software applications, allowing for better integration of third-party hardware and software.) Cinemo’s solutions can work with a variety of operating systems and CPU designs, seamlessly integrating with in-vehicle infotainment systems from different car manufacturers. Cinemo says that its unified middleware solutions will “decode, play, render, stream, manage, and index virtually any file, disc, connected device, streaming format, (or) cloud content.”

Video services, music services, streaming providers, podcasts – the providers are heavily investing in the (automotive) space. Also, if you look at car audio, especially branded-audio car offerings, those are gaining market share. Consumers are buying more devices where audio matters, and will upgrade car audio. Dolby Atmos is a popular feature in smartphones, home entertainment, smart speakers, and PCs. Car manufacturers need infotainment specialists that understand their needs. That’s why Dolby is collaborating with Cinemo, a company with a history of infotainment innovation.

According to Dolby, the global car audio market is expected to grow to $52.4 billion in the next five years. If you’re an automotive manufacturer, Dolby says that embracing Atmos is one way to ensure that you’ll get your piece of that pie. Together, Dolby and Cinemo are developing a solution that will make it easy for original equipment manufacturers (OEMs) to deliver Atmos to the end user. “We are constantly driving innovation and work closely with many OEMs,” says Cinemo co-founder, Ivan Dimkovic. “They need reliable partners, like Dolby, and companies that really understand the automotive space, like us. It’s different from the consumer electronics space. OEMs (only) trust a handful of companies that understand those differences, and Cinemo is one of those companies.” Thomas Ziegler, Director of Automotive Architecture at Dolby, is in charge of the architecture of the Dolby Atmos solution for cars. He is working closely with counterparts at Cinemo to help OEMs integrate Dolby Atmos into their vehicles as easily as possible. “That blending of expertise is why OEMs can be confident they’re getting the best solution,” he says. Because Cinemo automotive solutions are already deployed in millions of cars worldwide, it will be an easier transition for those car makers to upgrade their infotainment offerings to incorporate Dolby Atmos. They will be using established APIs from a trusted partner that they are already comfortable working with. That should make the car manufacturers happy, but it’s also a win-win for Dolby and Cinemo. Dolby gets Atmos into as many cars as possible, while Cinemo gets an exclusive (for now) partnership that allows the company to provide a buzzword feature that OEMs are asking for. According to Dolby and Cinemo, the Dolby Car Experience is able to “seamlessly integrate into new and existing car audio subsystems, and can map to most speaker configurations.”

Cinemo always strives for innovation and speed, working diligently to gain the trust of automotive partners to seamlessly enable next-generation technologies. By teaming up with Dolby, car manufacturers can take advantage of this collaboration and, within a short timeframe, offer an immersive audio experience to their customers.

Any time you do something new, it is a challenge. And we love to take on challenges for our customers. And working with Cinemo, we are providing a single component that can be easily integrated into the OEM’s existing subsystem, just like an existing codec. We also need to take care that we don’t use all the processing power of the head unit for Dolby Atmos, but we’ve got a good balance – that is not a problem. Cinemo is already deeply engaged into the automotive business. They know what they’re doing; they’re very flexible, and they can tailor it to any OEM’s particular needs.

Dolby stresses that the Dolby Atmos solution for cars isn’t just about boosting or up-mixing stereo tracks — though I am sure it will have this ability. It’s about faithfully delivering Dolby Atmos music that has been mixed (or remixed) in the studio to deliver an immersive audio experience “as the artist intended.” That means we can expect support for Apple Music, Amazon Music, and Tidal — the three major streaming services that currently support Dolby Atmos. According to Dolby, other services are “taking an active interest” in Atmos, but haven’t yet made forthcoming Atmos support official. As Dolby works to get Atmos supported by more streaming services (will Spotify be next?), Cinemo’s Director of Partnerships, Charly Lippoth, is working with these same content providers to integrate their apps and services into OEM infotainment systems. “We are able to provide access to multiple service providers. We ease the complexity for the OEM of integrating those services into the car,” he says. “The OEM is going to benefit from much faster time to market by having Cinemo take care of the technical heavy-lifting to make these services available in the car.” In order to ensure that putting Dolby Atmos into vehicles makes financial sense for the OEMs, Dolby and Cinemo have outlined a number of “business benefits” that go beyond innovative technology and focus instead on practicality. After all, if Atmos proves difficult for an OEM to integrate into the product line, or if it’s unreliable or too costly, the OEM may decide that it’s not worth the headaches.

The business benefits of adopting the Dolby/Cinemo solution reportedly include the following:

In the end, Dolby and Cinemo are simply clearing a path that will allow OEMs to embrace Dolby Atmos with as few obstacles as possible along the way. According to Cinemo’s Director of Partnerships, Charly Lippoth, that’s what will attract OEMs to the joint offering from the two companies. “Removing the friction, that’s the key,” he says. “Our partnership is a testament to this. When two companies with a culture of innovation align and can put the puzzle pieces together to bring this technology to market, it makes it so much easier for the OEMs, and gives them every reason to offer this great technology to their customers.” Would you pay a premium to have Dolby Atmos in your next car audio system? Share your thoughts in the forum thread below.

ryanosaur, post: 1552933, member: 86393
Not gonna lie… this seems like a foolish choice and a really bad idea. The last thing we need is to be driving and get distracted by spacial cues coming from all around our little bubble of isolation that the modern car is.

It's bad enough listening to some Hip Hop and you here a police siren! Or worse, that one classic rock track that does the quadraphonic spin around the four main speakers.

On top of that, I have no need, use, want or desire for this. Who is going to be spending that much time in their vehicles that they'd want or need this type of technology in there?
WookieGR posts on April 18, 2022 17:42
Besides rich corinthian leather, I have thouroghly enjoyed 3D spatial audio in my cars for generations, i lovingly call it road noise.
Post Reply