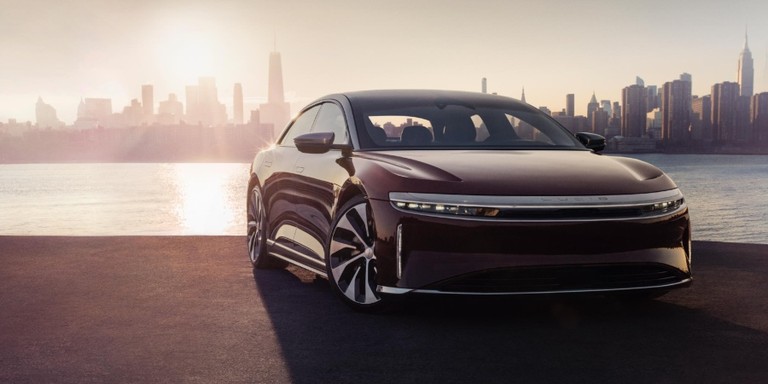 The Lucid Air is a new electric car expected to launch later this year (credit card deposits taken now). Large, luxurious, fast, and expensive, the Air will be a direct competitor to the Tesla Model S, the Porsche Taycan, the Audi e-tron GT, and the new Mercedes EQS. The first prototype of the Air was unveiled back in 2016, but building a new car company from scratch is no mean feat. There are other EV startups hoping to replicate Tesla’s success — Rivian and Faraday Future have stood out from the crowd alongside Lucid Motors — and their success may depend as much on their funding as on their design and engineering prowess. Which of these companies can afford to stay in business long enough to reach the finish line? In 2019, Lucid Motors secured over $1 billion from the Public Investment Fund of Saudi Arabia. Then in February of 2021, the company announced an $11.75 billion merger with Churchill Capital Corp IV. I think it’s safe to say that Lucid is poised to deliver. When it finally hits the roads, the Air will be the first complete car from the California-based company, which began life in 2007 building electric vehicle batteries and powertrains for other manufacturers. In development since the early 2010s, the Air will also be the first electric car with a promised range of 500+ miles — if you pony up $139,000 for the Grand Touring configuration, or $169,000 for the top-of-the-line Dream Edition. The “entry-level” car will cost $77,400 and deliver 406 miles of range when it launches in 2022. Early reports on the Air focused largely on its unique battery tech, which allows for super-fast charging and those impressive range figures. But as we get closer to the car’s launch, Lucid Motors has begun to elaborate on the car’s opulent interior and user experience, from the curved 34-inch display, to the Amazon Alexa voice assistant, to the integrated apps from Spotify, Tidal, and others. For audio enthusiasts, the biggest piece of news is that — in another first for an automobile — the Lucid Air’s 21-speaker Surreal Sound system will integrate Dolby Atmos.

As the first car to integrate Dolby Atmos, Lucid Air delivers an elevated, multi-dimensional sound experience on par with the other innovations at Lucid. The post-luxury experience is not just about beautiful design and next-generation technology, it also speaks to an unmatched in-car experience that engages all the senses. When I first heard that the Lucid Air would feature Dolby Atmos, I was immediately reminded of car-shopping with my brother-in-law Seth back in the early 2000s. He had just passed the bar exam and landed a job at a big law firm. He was excited to — and, perhaps, expected to — arrive in a shiny new luxury car. We tested out the usual suspects from BMW, Audi, and Lexus. I was partial to the super-comfortable seats in the Saab (RIP). But my favorite was the Acura. It wasn’t as sporty to drive as the BMW, nor did it appear as solidly-built as the Audi. But, I argued, the Acura was the practical choice. Essentially a fancy Honda, the Acura would be reliable and relatively inexpensive to maintain. Plus, it was a little roomier and a little less expensive than the Germans. Secretly, though, I had another reason for favoring the Acura. It had, by a wide margin, the best sound system of the bunch. And unlike any other car we saw, it could play back DVD-Audio discs in 5.1-channel surround sound! If I remember correctly, I only had three DVD-A discs at the time (The Beach Boys’ Pet Sounds, along with a Fiona Apple album, and one from Toad The Wet Sprocket frontman Glen Phillips), but the idea of playing them in the car was fascinating to me. My brother-in-law didn’t even know what a DVD-A disc was. He bought the Audi. Back then, in-car audio wasn’t as big a part of the audio industry as it is today. There were, of course, plenty of aftermarket speakers, amps, and subwoofers for sale at Best Buy and Circuit City. But at the car dealership, you could choose either the no-name factory system, or an upgraded system from a consumer audio company like Bose. Nowadays you can drive off the lot with a custom-designed audio system from Meridian, Naim, Revel, McIntosh, Mark Levinson, Burmester, or Bowers & Wilkins. Perhaps Acura was ahead of its time, but I think the average car buyer, like Seth, just didn’t care about DVD-Audio or 5.1-channel surround sound. Will electric car buyers in 2021 be swayed by the inclusion of Dolby Atmos in the Lucid Air? Lucid Motors thinks so. The company teamed up with Dolby fairly early in the car’s interior design process, using the legendary Capitol Records Studio C recording studio as the reference design for the Air’s in-car audio system. And now that Dolby Atmos music can be streamed on Apple Music as well as on Tidal, the technology certainly has wider reach and greater customer awareness than DVD-A ever did. The 21-speaker “Surreal Sound” system in the Lucid Air “consists of front, rear, side, and height speakers optimally integrated and precisely positioned in the Air interior to allow the driver and passengers to feel the relative movement of individual sounds as they move around the cabin,” according to Lucid. For non-audiophiles who don’t own big stereo systems or home theaters, the car stereo has long been the best-sounding music playback device available. And for those who commute in traffic, the car is probably the place where the most time is devoted to listening. Lucid seems to be keenly aware of those facts, claiming that its Surreal Sound system with Dolby Atmos will “deliver an unprecedented listening experience that will transform music listening in your car.”

From reimagined classics to some of today’s biggest chart-topping hits, Dolby Atmos Music has been positively embraced and viewed by the music community as one of the industry’s biggest paradigm shifts within the past 50 years. As a company, we are fully committed to bringing immersive audio to all the ways in which music is enjoyed. Automotive is a natural extension for the incredible experience of music in Dolby Atmos, and we are excited to bring this to the world with Lucid. It was very obvious to us that Lucid was trying to do something different and trying to do something that was unique to the automotive experience. The way that Lucid has approached the automobile very much resonates with Dolby's approach to experiences. We are creators creating things for other creators. With Atmos we're giving creatives a whole new way of thinking about audio to where they now just think about audio in space. Immersive Sound for Safety Too!

The AV gear inside a car is often described as the vehicle’s “infotainment” system. That merger of information and entertainment has been extended to the Atmos-enabled Surreal Sound system in the Lucid Air. Object-based surround sound formats like Atmos and DTS:X are all about full immersion, but they also excel at locating specific objects in space all around the listener. This 3D audio imaging ability has been put to use in the Lucid Air’s sound system not only for entertainment but also for safety features, such as “acoustic signaling of notifications, indications, warnings, and all other audio emitted to alert the driver and passengers” to important bits of information. For example, if the rear left-side passenger’s seatbelt is not buckled, the driver will hear the seatbelt tone coming from the corresponding seat. If you’re driving the Lucid Air and there’s a car in your blindspot, the blindspot warning will place the sound in the appropriate place so you know where the hidden car is situated relative to you. Even the turning indicator will sound as if it’s coming from the indicated side of the car. The Surreal Sound system delivers more specific and more useful information that is totally intuitive for the driver to understand. The average car buyer may or may not care much about Dolby Atmos music, but these audio safety features could represent game-changing developments in infotainment system design. I would be very surprised if we didn’t see similar features emerge in other tech-focused cars in the near future.

For more information about the Lucid Air’s sound system, check out this video from Dolby.